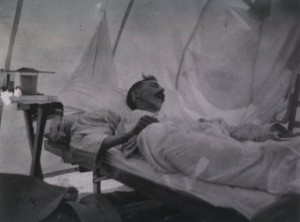 Victims developed chills, fever, and muscle aches, followed by liver failure, which produced jaundice (yellowing of the skin and eyes). Some victims bled from the nose and gums, and internally into the stomach, resulting in black vomit, giving the disease its Spanish name, vomito negro.

No one knew what caused yellow fever. They knew it was not contagious between individuals, and people commonly believed it was transmitted by fomites (contaminated objects), such as clothing and blankets. There was no treatment for yellow fever other than supportive care, and as many as half of its victims died.

Yellow Fever and The Spanish-American War

The effect of yellow fever on armies was clear during the Spanish-American War in 1898. That brief four-month war and the occupation of Cuba afterward cost nearly 3,000 American lives. Of those, less than 400 died in combat. The rest died of disease, including 2,000 soldiers who died from yellow fever alone.

The United States military was well aware of the yellow fever threat in Cuba, particularly during the summer months, when the spread of the disease was at its worst. Nevertheless, war fever drove the U.S. to invade Cuba in late June, at the height of the yellow fever season.

After declaring war on Spain in April 1898, the War Department ordered the formation of regiments from southern states where yellow fever was endemic. It was thought these soldiers would be immune to the disease, and the regiments were called “the Immunes.” Immune, however, they were not: eventually, more than a third of the soldiers in one black Immune regiment died from yellow fever or malaria.

The first yellow fever cases among American troops appeared on July 6. Within weeks, hundreds of soldiers were sick with the black vomit or malaria. Spanish troops fared no better: out of an army of 230,000 soldiers, only 55,000 troops were healthy enough to fight. Disease, said the American commander, Major General William Shafter, was a “thousand times harder to stand up against than the missiles of the enemy.” 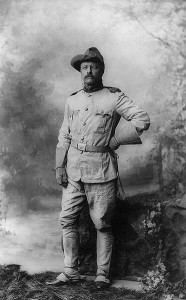 In 1898 Theodore Roosevelt was a colonel in the Spanish – American war. He probably saved the lives of many men by getting them out of Cuba before they caught yellow fever. Image courtesy of the US Library of Congress.

Future President Theodore Roosevelt, then a colonel of cavalry, felt the same. Shortly after fighting ended on July 17, Roosevelt took the initiative to write a letter to Shafter requesting his troops be returned to the states before they fell victim to yellow fever. It was co-signed by seven generals under Shafter’s command. The letter resulted in the bulk of the American combat force being returned to the United States. They were replaced by occupation troops who would suffer the greatest impact of vomito negro.

For the next two years, the occupation troops suffered miserably from yellow fever. By 1900, 13 men had died from yellow fever for every soldier who died in combat. Army Surgeon General George Sternberg formed a special commission with the mission to determine yellow fever’s cause and how to prevent it.

By the mid-20th century, yellow fever was no longer the scourge of the battlefield, but even today it remains a deadly disease for which there is no cure. The World Health Organization estimates that 200,000 cases occur worldwide each year.

Millet, A. R., and Maslowski, P. For the Common Defense: A Military History of the United States of America. (1984). New York, NY: The Free Press.