Did Marbury Have a Remedy? 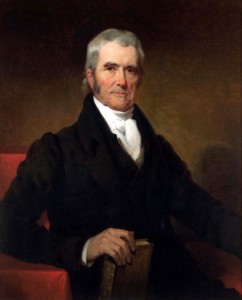 Marshall used Marbury v. Madison to lecture the Executive Branch as to its power relevant to the Judiciary but then denied Marbury his commission on the basis of Judicial Review. Portrait by Henry Inman.

Thus, Marshall addressed the question of whether Marbury had a remedy under the Judiciary Act of 1789. Although Section 13 allowed petitioners to bring actions before the court in order to force government officials to do their duty, in this case a write of mandamus, this action violated the constitutional nature of the court as an appellate court in such matters, as opposed, for example, to a trial court.

The Supreme Court had no jurisdiction in the case of William Marbury. On that basis, Marbury could not receive his commission and the Judiciary Act of 1789 was declared unconstitutional. The Supreme Court was not the first court Marbury should have brought his complaint to.

This concern continues. On April 26, 2013, for example, former Associate Justice Sandra Day O’Conner stated that the Supreme Court should not have heard the 2000 case Bush v. Gore. That decision continues to be viewed by many Americans as supporting a particular political agenda.

Retired Associate Justice Sandra Day O’Connor has suggested that the Supreme Court should not have heard the 2000 case Bush v. Gore. Image courtesy of Library of Congress, U.S. Government.

During an April 9, 2013 interview with C-SPAN, Associate Justice Clarence Thomas, answering questions regarding his view of an African American Chief of State, finally argued that, “I like history… I don’t understand politics.” In 1803, John Marshall may have been more political than either O’Conner or Thomas today, but his opinion in Marbury demonstrated a brilliant resolution designed to remind the other two branches of their constitutional prerogatives, while strengthening the Court as an independent entity that would not become a “political football.”

Playing Fast and Loose With the Law of the Land

During the Great Depression, the High Court declared some of President Franklin D. Roosevelt’s programs unconstitutional. In response, he devised a plan to enlarge it; however, Congress, including key members of Roosevelt’s own party, strenuously opposed this action, along with the American people. Vetting potential justices, a practice begun with almost circus-like hearings, began in the mid-twentieth century when the divide between conservatives and liberals became more pronounced.

During the time of Jefferson and up until the end of the Civil War, both Congress and the Chief Executive debated the constitutional merits of a bill. Acts of Congress were vetoed by presidents on the basis of constitutionality. Marbury was one early and brilliant attempt to preserve the equilibrium of the three branches of government, and a reminder that constitutionality was the responsibility of every branch of the new government. 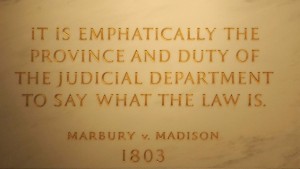 This engraving of a quotation from Marbury v. Madison (written by Marshall), at the United States Supreme Court Building, speaks to the heart of the matter. Image by swatjester CC BY-SA 2.0