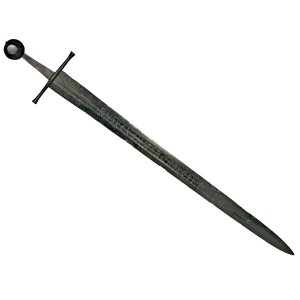 This Medieval double-edged sword (c. 1250-1330) is inscribed with lettering of inlaid gold wire. Image copyright Trustees of the British Museum, used with permission, all rights reserved.

The British Library set social media alight when it asked for help to decode the inscription on a medieval double-edged sword.

While the British Library is mostly concerned with preserving books and  deciphering old manuscripts, it had borrowed the sword from the British Museum to flesh out its Magna Carta: Law, Liberty, Legacy exhibition.

Inscribed swords were very fashionable at around the time of Magna Carta, 1215.

British Museum experts are certain the sword is English in spite of its German-forged blade and certain Viking features. They believe the cross shape of its handle is symbolic of a Christian owner.

Who Can Decode This Medieval Text Message?

The inscription of letters on this sword, rescued from the river Witham in 1825, was formed from gold wire inlaid into the steel blade – which experts believe was made some time between 1250 and 1330 in the Common Era. Problem is, nobody can work out what it means.

Julian Harrison on the British Library Medieval Manuscripts blog posed the request, “Help Us Decipher This Inscription” on August 3. The response was so strong that comments had to be closed.

Responders suggest that the message is written in shorthand or a form of medieval text message, that it contains the first letters of a prayer. Others suggest it may reference the Sicilian or German or Welsh languages, but is most likely a coded abbreviation from Latin.

Medieval heritage expert Marc van Hasselt responded with details of similar sword inscriptions he had attempted to decode from swords found across Europe that he believes were inscribed at the same prestigious workshop. He suggests that some elements common with other sword inscriptions are easily decipherable but that the name of a specific saint may be referenced; which saint is as yet unknown.

Inscriptions on swords were common in the Middle Ages, personalising an expensive item, symbolising the owner’s sworn oath as a knight and defender of the Church. These inscriptions usually begin and end with a symbol of a cross with T-bar ends, known as a cross potent or crutch cross (the T-bar being the crutch). 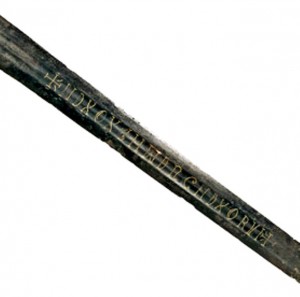 This medieval sword inscription of inlaid gold wire reads +NDXOXCHWDRGHDXORVI+ but what did that mean to the knight who owned it? Image copyright Trustees of the British Museum, used with permission, all rights reserved.

In their journal article, “Medieval Christian invocation inscriptions on sword blades”, Wagner and his colleagues point out that the cross shape at either end of a sword inscription was often embellished by additional details. The crutch crosses on this sword have simple additional marks that provide an enclosing bracket effect.

Marc van Hasselt compares the River Witham sword to a similar sword from Alphen: both inscriptions “start with some sort of invocation. On the River Witham sword, it is NDXOX, possibly standing for Nostrum Dominus (our Lord) or Nomine Domini (name of the Lord) followed by XOX. On the sword from Alphen, the starting letters read BENEDOXO. Quite likely, this reads as Benedicat (A blessing), followed by OXO. Perhaps these letter combinations – XOX and OXO – refer to the Holy Trinity.”

The Naming of Swords

The long tradition of naming swords was part of a ritual imbuing these tools of death and devastation with power, the power in which a soldier about to fight to the death needed to invest his trust and belief.

Named swords feature in Western literature, including  The Lord of the Rings, whose author followed the traditions shown in the Viking myths and sagas known as the Younger Edda, which Snorri Sturluson (c. 1220) wrote down. Excalibur is the legendary sword of King Arthur, in Geoffrey of Monmouth’s largely fictional History of the Kings of Britain, written in 1136.

Soldiers and crusaders are known to have named their swords. Viking sagas suggest how, along with other forged weapons such as axes and hammers, swords received names. In his thesis, The Role and Status of the Smith in the Viking Age, Timothy Carlisle gives examples like “brynbitr and fótbitr. […] Brynbitr translates to ʻmail biter,ʼ implying the weapon could penetrate Viking Age chain-link armour […]” Carlisle references swords named Dainsleif and, “fótbitr, which translates as ʻleg-biter,ʼ implying that the blade was exceptionally adept at cutting at an opponent’s legs.”

Dain, as in Dainsleif, was an especially skillful, possibly mythical, sword smith. A soldier’s belief was imbued in the power of his sword through its name, and the name of its maker.

Carlisle finds that, “The names of weapons in Icelandic sagas are especially telling of a weaponʼs quality, as well as the weaponʼs position as a venerated object” and details the development of elite and even spiritual status for the smiths who forged them. Pan-European legend voiced a cult for the smith, the most enduring of which is Wayland.

Viking burial sites demonstrate a reverence for the products of the smith in the objects buried with their owner as grave goods, including his sword. Sword names were etched in runes on the hand guard, not necessarily inscribed on the blade until later in the Viking era.

Many swords inscribed ULFBERHT have been found among grave goods, dating to the height of the Viking era, the tenth and eleventh centuries. Ulfberht is believed to be the name of the smith, and the complex construction of an Ulfberht sword suggests it was a very high status object.

Some responders to Julian Harrison’s  plea to decipher the Witham sword suggest that some of the initials in the inscription may be those of the smith who made the sword.

Confusing Features of the Witham Sword

The double fullers or grooves in the blade are puzzling. A fourteenth century illustration from a copy of the Grandes Chroniques de France clearly shows similar swords to the Witham sword, but with only one groove down the centre.

Perhaps the double groove is a retro style feature, harking back to the Viking era? Perhaps a quirk of one particular smith?

The German steel from which the Witham sword is forged is a key date identification feature and shows the high status of this sword. By the thirteenth century this was the strongest forged steel and Germany became the centre of sword blade manufacture in Europe. 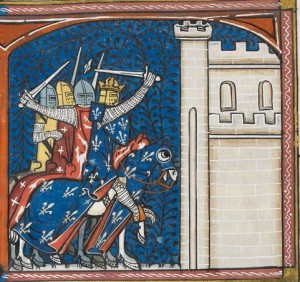 Double edged swords with single fuller illustrated in use in a battle between British and French knights. Image courtesy British Library used with permission, all rights reserved.

British Museum experts identify the sword as English because of the style of its pommel, its inscription combined with the shape of the blade. “A fine example of the classic ‘knightly’ sword,” they say.

By the late thirteenth century old traditions of sword-naming and sword inscription had evolved into something complex and symbolic. The sword as status object symbolised the social standing of its owner rather than his power as a warrior.

Perhaps only a knight’s chosen saint indicated in the inscription said anything about his private relationship with his weapon? The chosen saint might give a clue at least to the Christian aspiration and value system of the knight.

“WD” in the centre of the Witham inscription could indicate a focus on either Saint Wilfred or Saint Winifred.

Saint Wilfred, once a Lindisfarne monk, became a powerful yet unpopular advocate for imposing Roman doctrine on early British Christian institutions. The miraculous Saint Winifred was the Welsh saint who made a famous pilgrimage to Rome, and whose shrine was the focus of a great cult at the time the Witham sword was made.

“RG” could indicate a dedication to the virtuous Saint Radegund, who founded a monastery, and to whom many other monasteries or convents were dedicated in medieval England and France.

She is the patron saint of prisoners, particularly relevant in the thirteenth and fourteenth centuries, when many hostages were ransomed during various wars and crusades. As Radegonde, she was particularly well loved in the Poitiers and Gascony regions of France that English kings and nobles had inherited, but had to fight hard to maintain sovereignty over.

Although sword epigraphy (translation of sword inscriptions) could be a useful tool in accurately dating and identifying swords, this is an under-developed field, Worley and Wagner suggest in their paper, How to make swords talk.

The object is “a reflection of the complex psychology of the society that produced it,” they point out. Swords had a role in society and decoding sword inscriptions adds to understanding of that role.