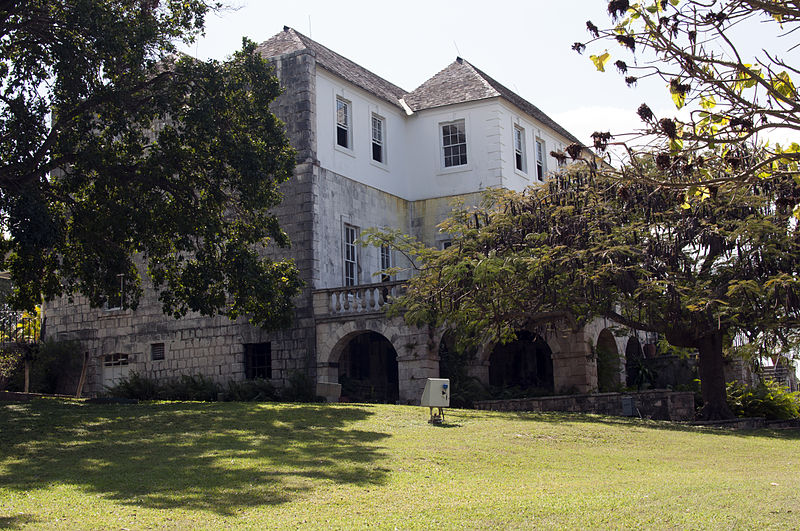 Rose Hall – is it haunted or not? Image courtesy of WPPilot.

In 1928, Herbert de Lisser’s book The White Witch of Rose Hall presented a sensationalized fictional version of Annie Palmer’s life. He believed the alleged paranormal activity in the mansion was nonsense and decided to write a book in which Annie practiced Voodoo, killed three husbands, physically abused slaves and was promiscuous. The facts and fiction vary greatly; however, there are still people who perpetuate the myth, including a well-known ghost hunter.

In the 1770s, builders completed Rose Hall on land above Jamaica’s Montego Bay. The Georgian mansion had mahogany floors, and paneling as well as interior windows and doorways. The mansion also boasted ornamental chandeliers, hanging from its ceilings. Damage from the slave rebellion in 1831 led Rose Hall’s owners to abandon the mansion and leave it to ruin.

In the late 1960s, wealthy John Rollins bought Rose Hall. He went on to restore the mansion to its former glory, with a few additions, including a bar that sold souvenirs, a restaurant, and tours to profit from alleged “paranormal activity.” Today the grand house is part of the Hilton Hotel chain.

Herbert de Lisser tells us in his fictionalized version of Annie’s life, that she learned Voodoo when she lived in Haiti as a child. After her parents died, Annie, now twice widowed, moved to Jamaica and married John Palmer. After he died, she married Robert Rutherford who went on to have an affair with Millicent who was both their housekeeper and daughter of a local Voodoo practitioner named Takoo. According to the story, Annie discovered the affair and cursed Millicent, who became deathly ill. In revenge, Takoo and some other slaves then murdered Annie by suffocating her.

According to Hans Holzer, in the 2004 paperback edition, of his book, Ghosts: True Encounters with the World Beyond, published by Black Dog & Leventhal Publishers, Inc., some people called the mansion the most haunted house in the Western Hemisphere. He wrote that he visited it twice – but, without a “proper trance medium,” on page 657.

Holzer claims “Annie Porter’s” (sic) spirit never left the mansion. He used the last name of “Porter,” not Palmer, throughout the chapter. Holzer further claimed that Eileen Garrett, one of the most talented trance mediums and the co-founder of the prestigious Parapsychology Foundation, visited Rose Hall, accompanied by researchers. She went into a deep trance, and Annie’s hysterical ghost took over her body. In summation, he averred that this was a rare case where an earthbound spirit couldn’t leave…. Further research about Garrett’s visit to the mansion provided no credible sources of information concerning her experience in the mansion. Interesting to note that Holzer provided no bibliography or credits for photographs in this book….

Née Annie Mary Peterson, Annie Palmer really did travel through the Caribbean Islands, but didn’t learn Voodoo. She married John Rose Palmer, her first husband. Annie’s husband John died, while thousands of pounds in debt, of natural causes. Annie moved out of Rose Hall, never married again, and died in 1846 of natural causes. Annie was not murdered, did not abuse slaves or commit any crimes, and was not promiscuous.