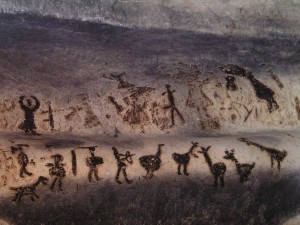 Prehistoric drawings on cave walls depict both animals and people. These are in the Magura cave in Bulgaria. Image by Nk.

Music is everywhere. We can’t escape it. We listen to it on the radio while driving around doing errands. We hear it in the background sound effects at the movie theater or on the television. Commercials use (or abuse, depending on your perspective) music to catch your attention and try to make a sale. Music is in grocery stores, public buildings, work-out facilities, recreation centers, and schools. Perhaps the only place you might be able to escape it is in the library.

Do we really want to escape music? Have you ever thought about abolishing it? Is it possible to eliminate it from our lives? It has been embedded into our psyche since the day we were born. It soothes, relaxes, inspires, controls, and manipulates – all that and much more. Life is music. So, when did music begin?

It’s difficult to say when music began. We can find references in various religious texts to singing and making music. We see evidence in cave paintings that depict people dancing. (You have to admit that the presence of dancing strongly suggests the presence of music.) It has been suggested that the first musical instrument might have been a roughly constructed hollow stick through which one could blow and make sound – the precursor of wind instruments.

Sticks to beat out a rhythm? Simple, yes; crude, perhaps, but doesn’t music include even that type of crude instrument? What about the feet and the hands that tap or stamp out a rhythm? Doesn’t music involve rhythm and some semblance of a beat? And what about the human voice? Isn’t that a musical instrument too? The voice has certainly been around since the first humans walked this earth.

To determine the beginning of anything, one must define it. What is music? There are various definitions that offer suitable interpretations. Here’s a definition from Dictionary.com:

“Music – an art of sound in time that expresses ideas and emotions in significant forms through the elements of rhythm, melody, harmony, and colour. The tones or sounds employed, occurring in single line (melody) or multiple lines (harmony), and sounded or to be sounded by one or more voices or instruments, or both.”

Yahoo.com goes further: “an aesthetically pleasing or harmonious sound or combination of sounds: the music of the wind in the pines.”

In What is Music?, Philip Dorrell describes music scientifically as a “super-stimulus of perception.” A more aesthetic interpretation from Annie Lennox, writing in Resurgence & Ecologist (July/August 2008), defines it as as “pure magic.” 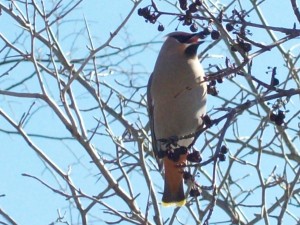 Birds sing their own songs to communicate. Many have beautiful melodic calls. Image courtesy of Clive Orford.

If music is sound, pleasing and magical, with variations in pitch that suggest a melody and some sort of rhythm, perhaps even a counterpoint of harmony, then it follows that it really did exist long before humans walked the earth. As Sarah E. Worth points out, music is a form of communication. Don’t all living creatures communicate with one another? After all, don’t the birds sing? Isn’t singing a form of making music? What about the creatures of the sea? Whales are believed to sing their own eerie songs in the deeps.

In order to define precisely when music began, one would have to go back much further than the parameters of recorded human history.

Nature has always had its own special music, as A. Leokum poignantly wrote in the Fredericksburg Virginia’s Free Lance-Star:

“Did you ever walk in a forest and suddenly come upon a little brook bubbling merrily along its path? Didn’t it sound like music? When the rain pitter-patters against a roof, or a bird sings heartily – aren’t these like music?”

Let’s go beyond the suggestion that natural sounds are like music and suggest that all of nature is music. The Romantic composers frequently composed music in honour of natural sounds. Contemporary composers went a step further and used actual sounds of nature in their compositions.

Humans tend to believe that everything started with the first signs of human intelligence, with the first recorded events of human history. We could believe that music started with the caveman, or that the Book of Psalms (from Hebrew scripture as well as the Old Testament of the Christian Bible) were early examples of vocal music, and that King David’s harp was one of the first stringed instruments, which he used as accompaniment when singing the psalms that scholars believe he wrote.

If we look at the broader definition, however, as humans we really can’t take the entire credit. We did not create music. It has always been out there, waiting for all of us to discover, to appreciate, and to enjoy.