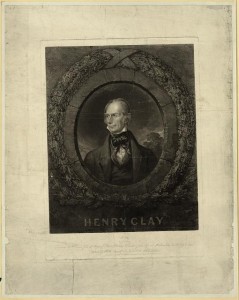 Henry Clay was a young leader in the war hawks congressional faction who vocally advocated war with Great Britain in 1812. Image courtesy of Library of Congress, artist unknown.

Virginia Congressman John Randolph coined the term war hawk to refer to those in favor of going to war with Britain at the beginning of the 19th century.

In 1812 America was anything but a unity of happy states moving toward becoming a continental power. The Louisiana Purchase had opened new lands to feed the insatiable westward movement of colonists. That movement enticed European immigrants and depopulated America’s northeast. It also displaced Native cultures, some of which still aligned with British forces in Canada. The British seized the opportunity to turn the natives against American frontier settlements. Most of the newly acquired lands were agriculturally oriented and the settlers had no love of Britain, unlike the northeast cities like Boston whose survival depended on European trade.

The War of 1812 had many causes, but the greatest blame rests with a few vocal members of Congress known as War Hawks, as well as a blundering foreign policy that left no room for negotiation. At issue were a number of grievances affecting American trade, as Great Britain and Napoleonic France attempted to interdict commerce in order to weaken one another.

British ships stopped American vessels illegally, seizing sailors and accusing them of being British navy deserters. This policy of “impressments” was egregious, violating the sovereignty of the new nation. Even as the Napoleonic Wars were slowly ending in Europe, British upper classes supported strong action in America, viewing the United States as an upstart nation, if a “nation” at all.

Several influential American politicians, determined to put an end to British strong-arm tactics, advocated expansion into Canada: the very first military ventures would be aimed at “taking Canada.” These vocal war hawks represented the Southeast and the emerging new states carved out of the Louisiana Purchase. John C. Calhoun of South Carolina and House Speaker Henry Clay of Kentucky led the faction calling for war with Great Britain. 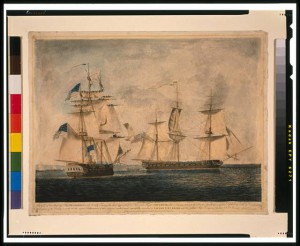 This painting depicts the HMS Shannon closing on the American frigate Chesapeake. Painting by R. Dodd, 1813, courtesy of U.S. Library of Congress.

Among the primary causes of the war were the British Orders in Council, which placed severe restrictions on American shipping. Ships were seized and their cargoes confiscated. This caused insurance rates for shippers to spiral and resulted in numerous congressional measures designed to force an end to both British and French actions.

By 1812 the Napoleonic wars were ending and the British repealed the Orders in Council, but the repeal came too late. The congressional war hawks pressured President Madison into a war declaration, which was passed before word of the British repeal reached Washington City. The lack of any senior American envoy in London contributed to the failure of diplomacy. 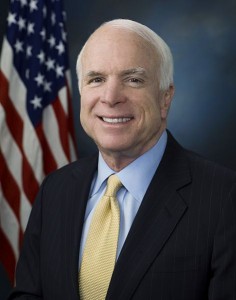 John McCain reflects contemporary war hawk rhetoric, most recently over the Arab Spring in Libya and the escalation of civil war in Syria. Official government photo courtesy of US Library of Congress.

The term war hawks is still used today to characterize those advocating war as an appropriate response in conflict situations. The contemporary Arab Spring, for example, continues to elicit American responses in terms of military intervention. This was true in Libya and is true in the current Syrian civil war. Senators like South Carolina Lindsey Graham and Arizona Senator John McCain have been labeled war hawks by colleagues and critics.

Grace Wyler, writing in the May 18, 2013 Business Insider, refers to McCain as “a staunch foreign policy hawk.” A similar observation was made by Kentucky Senator Rand Paul during his recent filibuster concerning drone warfare. Drone warfare, along with cruise missiles, may be the perfect replacement for “boots on the ground.” Hawks have always been used in hunting and, ironically, a new drone under development in Germany by Northrop Grumman is dubbed “Euro Hawk.”

War with Britain in 1812 was caused, in part, by the words and actions of war hawks like Clay and Calhoun despite lack of national spirit or preparation. The previous Jefferson administration had cut defense spending, leaving Madison to rely on the militia and a few seasoned officers. Historian Page Smith comments, “It is a gross error to fight a new war with the heroes of an older one.”

Ultimately, the war changed no boundaries, left the new nation deep in debt, and exacerbated sectional disunity. The nation’s capital, Washington City, was a smoldering ruins. Clay and Calhoun, however, emerged on a path that would make them among the most celebrated politicians in the pre-Civil War years.

In 1812, war hawks used both political ends and popular opinion to achieve their results. Whether an appeal to nationalism, the so-called “romance” of a war fought for a good cause, or the postmodern impersonal nature of conflicts as characterized by drones, war hawks compromise diplomacy, hardly viewing militarism as a last resort and as the last necessary part of an overall grand strategy. If 1812 is a case study, then how many other wars might have been avoided by means other than military action?