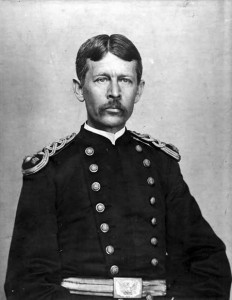 Yellow fever took a terrible toll on American troops in Cuba during and following the 1898 Spanish American War. Of nearly 3,000 American lives lost during the brief war, less than 300 died of combat wounds. The remainder died from disease, including 2,000 lost to yellow fever, also known as the black vomit, or vomito negro.

Occupation troops in Cuba continued to die from yellow fever after the conflict ended. Army Surgeon General George Sternberg formed a special Yellow Fever Commission. In 1900 he charged bacteriologists Dr. Jesse W. Lazear and James Carroll, and Cuban surgeon and pathologist Dr. Aristides Agramonte, with the mission to determine yellow fever’s cause and how to prevent it. Sternberg appointed Major Walter Reed to lead the commission.

At 49, Reed was known as a brilliant medical researcher who held two medical degrees, and had already disproven one theory on yellow fever’s cause. In 1896 he was able to prove that outbreaks of yellow fever among soldiers stationed near the Potomac River did not come from drinking the river’s water, as others believed. Instead, he showed that stricken soldiers all had the habit of walking along trails through the swampy woods at night, while uninfected soldiers avoided the swamps.

The most widely held theory for yellow fever’s transmission was exposure to fomites – objects exposed to body fluids from yellow fever victims. However, in 1881 Cuban physician Carlos Juan Finlay postulated the fever was transmitted by the bite of the Aedes aegypti mosquito. Unfortunately, Finlay’s work was rejected by the medical community.

In 1898, however, European researchers demonstrated that the anopheline mosquito transmitted malaria, lending greater credence to Finlay’s theory. Reed, perhaps due to his research along the Potomac, considered Finlay’s theory plausible.

Not everyone on the commission agreed. With Reed back in Washington, Lazear and Carroll decided to test Finlay’s theory, expecting to disprove it and move on to more likely causes. Using infected mosquitoes acquired from Finlay, Carroll allowed himself to be bitten. A few days later he became seriously ill with yellow fever. Shortly afterward, Lazear exposed himself to the mosquitoes. He developed yellow fever and died.

Outraged at the sloppy experimentation and Lazear’s death, Reed returned to Cuba. He established new protocols for the research, some of which became the foundation for ethical human experimentation protocols still used today.

First, he recruited Army medics and recent Spanish immigrants to Cuba – all non-immune to the fever – and explained in detail the risks they would be undertaking. He also paid them well for taking those risks. 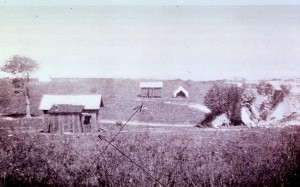 Major Walter Reed constructed two huts (arrows) – one contaminated with fomites, the other clean but filled with mosquitoes – to determine how yellow fever was transmitted. Image courtesy of the National Library of Medicine.

Reed established a small camp at Quemados, Cuba to conduct his experiments. After a quarantine period to ensure none of the volunteers already had the disease, Reed exposed five men to bites from Finlay’s mosquitoes. After three to five days, each man fell ill with yellow fever. The commission established that it took twelve to eighteen days for yellow fever to incubate in the mosquito’s stomach before it could be transmitted.

The final phase of testing was designed to prove definitively that mosquitoes, not fomites, transmitted yellow fever.

The researchers built two huts, one with poor air circulation, the other well ventilated. They filled the first with fomites, while screens prevented mosquitoes from entering. They disinfected everything that went into the second hut with steam – but the hut contained 15 infected mosquitoes.

A volunteer slept in the second, clean and well-ventilated hut. He was bitten three times. Four days later, he developed yellow fever.

Thus, Reed’s commission proved that fomites did not cause yellow fever infections, and that Finlay was right: like malaria, mosquitoes were the yellow fever vector. The discovery’s impact was felt far beyond the battlefield. It led to mosquito abatement programs still used today to prevent the spread of yellow fever, as well as malaria.

Reed and his commission were hailed as heroes around the world. Walter Reed, however, had little time to bask in glory. He died in 1902 of complications following an appendectomy.