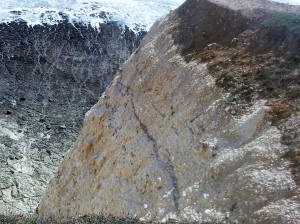 “Oh, how can it be that the ground does not sicken?” Walt Whitman’s striking and discomforting imagery spiritualises his world. Photo by Janet Cameron, All Rights Reserved.

Walt Whitman’s evocative poem is a metaphor for religious experience. It examines, in distressing and lyrical imagery, concepts of death and rebirth.

Who Was Walt Whitman?

Walt Whitman was born on Long Island on 31 May 1819, and moved to Brooklyn when he was four, where he attended school for five years. At eleven years old, Whitman left school to go to work. At various times in his life, Whitman was a carpenter, an editor of contentious newspapers, and a teacher.

During the Civil War, Whitman held government jobs in Washington, where he suffered persecution for the alleged obscenity of his work. During the war, he became a nurse, tending to wounded soldiers.

At this time, around fifty years after its successful democratic revolution, America was ready for great poetry and a great poet. In his country romance novel, Kavanagh, published in 1849, Henry Wadsworth Longfellow puts the following words into the mouth of one of his characters, exquisitely summing up America’s vibrant patriotic purpose:

For Whitman, the Mississippi and the Rockies, are both the seen and the spiritualised America, the external and the internal aspects of the one idea and the fantasy of the “Invisible World.” In Song of Myself, Whitman spiritualises his homosexuality, turning it into a vision of brotherhood and self-love, since society prohibited that which he desired.

A further difficulty Whitman encountered was his lack of education. This lack caused him to feel intimidated by the middle classes. As a result, he assumed affectations of roughness in excess of what was genuine. Sometimes he wrote his own, exceptionally admiring, reviews of his own work and submitted them to newspapers anonymously.

This Compost, Whitman’s Poem of Death and Rebirth

Whitman steeps his poem “This Compost” in contrasts and contradictions, of good versus evil, death and rebirth, disease and purification.

The first line of the first stanza alliteratively introduces a sudden insight from the poet: “Something startles me when I thought I was safest.” This realisation instantly challenges all that he loves and trusts. The earth is no longer part of his flesh and cannot renew him.

“O how can it be that the ground itself does not sicken?”

We discover that, within this soil, there are “distemper’d corpses” and “sour dead.”

The third stanza questions that “Those drunkards and gluttons of so many generations?” are no longer to be seen. There are brutal and direct descriptions of the “foul liquid and meat” that have been “drawn off” and somehow become invisible or transformed… “or perhaps I am deceived.”

In the last two lines of the stanza, Whitman says he will “press my spade through the sod… expose some of the foul meat.”

There is a sudden change of tempo in the first stanza of Part II of the poem, where Whitman commands: “Behold this compost! behold it well!” He concedes that: “Perhaps every mite has once formed part of a sick person,” and again, entreats the reader to “yet behold!”

From this point, the poems is profoundly lyrical and describes the beauties of nature, of vigorous regrowth:

“The delicate spear of the onion pierces upwards.” The choice of the adjective “delicate” adds poignancy to this line, and there is a phallic allusion in the noun, “spear.”

Following this, the “apple buds cluster together” providing a joyous unity.

Phrases like “The resurrection of the wheat appears with pale visage out of its graves” evoke strong images reminiscent of biblical creation and rebirth.

The Purification of the Sins of the World

The young of poultry and newborn animals appear, culminating in the summing-up in the last line of this stanza: “The summer growth is innocent and disdainful above all those strata of sour dead.” The next stanza proclaims, in an exclamation of wonder: “What chemistry!”

The corruption will not harm the poet, for he is loved by the “amorous” sea.

The final lines of this stanza are sensuous. The fruits are “flavorous and juicy” and “will, none of them, poison me.”

Yet, every spear of grass rises out of what was once a contagious disease. At the beginning of the final stanza, the poet says: “Now I am terrified at the Earth, it is that calm and patient… it grows such sweet things out of such corruptions” and “distills exquisite winds out of such infused fetor.”

The Purifying of the Dead

Without the stark contrasts, the roughness, the insistence on describing the world in all its uncomfortable reality, the sublime lyricism of Whitman’s verse would become less effective. Instead, the poet shows us that the sins of the world are the diseased corpses and the infused fetor, and which the Earth, like God, takes back into itself, purifying and making sweet, strong, new and beautiful.

Whitman’s poetry provided inspiration for the woman war-poet, Mary Borden, who used his long, expressive lines as a pattern for her own poems.