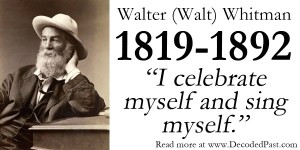 Walt Whitman hailed from Huntingdon, Long Island; and worked as a journalist, a teacher and a government clerk, as well as making a name for himself as the founding father of American poetry.

Whitman’s poetic stance is partly one of self-affirmation and self-aggrandisement; his poetry centres upon self, as a prophet, gathering the multitudes to himself with apparent joyfulness. This self is a spiritual self, both individual and universal. Whitman’s reality is everything he sees and absorbs into himself and this he celebrates in prophesy.

Whitman’s poem “Song of Myself” from Leaves of Grass, first published in 1855, is an American epic poem; it is episodic and much of its material tests the boundaries of convention. Its language teems with adjectives and adverbs, but these are carefully chosen, creating a picturesque series of vignettes that are both broad and grand in concept.

Whitman prefers to focus on the senses. He hears when “The pure contralto sings in the organ loft.” He breathes “… the fragrance myself and know it and like it.” His voice evokes the visual, audible, external world.

This is a poet of a young, vibrant America. “Song of Myself” is a poem of its time, written by an exuberant patriot, who declared himself at one with nature and who was ready both to challenge the established order and to capitalise on his success. The tone of his voice is highly confidential, as if Whitman is trusting the reader to accept him on his own, stated terms: “Has anyone supposed it lucky to be born?” he asks.

There are objections to this allegedly honest exposure of the poet’s personality. The reader might wonder if  he presents this underlying matey-ness as flattery toward the reader, enhancing the poet’s chances of acceptance, and the reader might suspect a trace of insecurity in its bombast.

On the surface, at least, the language of Whitman, from the first line of the first stanza, purports to present a large manly man with an equally large, all-encompassing, worldly spirit. “I celebrate myself and sing myself / And what I assume you shall assume, / for every atom belonging to me as good belongs to you.”

This is Whitman’s hook beginning, and we know, immediately, that the poem will be an epic, a song and a personal philosophy, and we sense that the poet wants us to believe there will be no dissembling.

The Poet of Reinvention

Graham Clarke, in his book, Walt Whitman: The Poem as Private History asserts: “Whitman, both literally and symbolically, constructed a poetic persona.” Clarke observes that Whitman’s personality is self-consciously present in the poem.

Whitman constantly reinvents himself, a bluff, powerful, all-American hero. The symbolism arises from this reinvention. He is himself and he is the world and all things in it; he is both God and a humble leaf of grass, a public poet, deliberately honing his chosen persona as symbolic, self-appointed prophet for God and the world.

Yet, Whitman is prone to concealment of self. His concealment seems not an entirely rational, conscious choice, but a psychological one, arising from belief in his own hyperbole. He achieves this concealment by donning his primary, powerful mask; creating in his poems a performance, impersonating a God-like being who spreads largesse across the world.

Frequently, he expresses his great tolerance and acceptance of the foolish, of the prostitute. In this way, he attempts to hide the uncertainty within by projecting his insecurity on others.

Whitman’s idealised picture of himself includes, by implication, a complementary – and complimentary – idealisation of America. The verse is confident, sweeping across a multiplicity of concepts and things, professing the spiritual oneness of all, man, God and nature, moving between the specific and the universal at a breathtaking pace. Clark describes this as “a dark self.”

The use of the verb “blur” here is deliberate, for the metaphors are scarcely adequate to conceal. “Love root,” is an example, as in “Root of washed sweet-flag! Timorous pond-snipe.” He personifies even the winds with sexual qualities. “Winds whose soft-tickling genitals rub against me, it shall be you!”

M. Jimmie Killingsworth, in Whitman’s Poetry of the Body, develops an argument around the male attitude to women’s sexuality: “A woman is incomplete without a man.” Killingsworth continues: “The sexually charged fantasies of the twenty-ninth bather represent an assault on the ‘guarded castle;’ they keep alive sexual possibility, counter to those condoned by society.”

Killingsworth explains that the woman is one of Whitman’s masks. He inhabits her mind, is the source of her desire, watching the young men bathing and wishing he could be a lover. “Perhaps the poet’s indefinite style at such moments may be attributed to a desire to conceal his homosexuality,” he says.

Yet, despite Killingsworth’s assertion, Whitman does not seem to try too hard to conceal anything. His metaphors are blatantly transparent. It could equally be argued he wants to be found out; indeed, he might find the possibility of discovery thrilling.

Eroticism as Substitute for Religion

There is certainly evidence that Whitman uses eroticism as a substitute for religion and; without doubt, professes himself to be the sexually-aware American poet, for whom body and soul are one and equally delicate. He may merely use the language of metaphor and mask to tell his story in a more socially-acceptable way, a way that helps him feel more secure in an insecure world.

Whitman, Walt. Leaves of Grass. Project Gutenberg. Accessed on May 07, 2014