It’s safe to say the Vikings have had an image problem. Long regarded as fierce marauders, raiding and pillaging their way from Lindisfarne to Kiev, Dublin to Constantinople, they are history’s ultimate pirates.

The Anglo-Saxon Chronicle sets the tone in its report of the famous attack on Lindisfarne in 793:

In this year terrible portents appeared over Northumbria, and miserably frightened the inhabitants: these were exceptional flashes of lightning, and fiery dragons were seen flying in the air. A great famine soon followed these signs; and a little after that in the same year on 8 June the harrying of the heathen miserably destroyed God’s church in Lindisfarne by rapine and slaughter.

The Vikings: Traders or Raiders?

More recently an attempt to rehabilitate the Vikings has gathered force, focusing on their wider culture and their role as traders. This is, as Gareth Williams, the curator of the British Museum’s exhibition Vikings: Life and Legend put it in his welcome speech at the exhibition’s opening, “the fluffy bunny school of Viking scholarship.”

The Vikings and the Wider World

Poem attributed to Magnus ‘Barelegs’ Olafson, king of Norway about 1100. Image by Decoded Past.

The first rooms of the exhibition highlight the diversity and broad sweep of the Viking world and the various cultures with whom they interacted. A video map shows their routes from their northern homelands west to the British Isles, Iceland and Canada, and east down the mighty rivers of Russia to Constantinople and the Caspian Sea.

They alternately traded with and terrified Anglo-Saxons, Franks and Slavs, and inspired fearsome chronicles by the monks of wealthy monasteries in the north and the historians of the Islamic Caliphate.

The exhibition is full of fascinating hints of a softer side to Viking life. There are drinking cups and gaming pieces, intricately carved amulets depicting the gods and necklaces made of silver dirhams.

The toy boats from Dublin and the copper brooch in the shape of a ship emphasize the central role of the sea and ships in Viking culture. Quotations from court poets, or skalds, adorn the walls.

Many of the artifacts on display, such as the silver Valkyrie amulet discovered in Denmark, are recent finds. Some, like the slave shackles, send a chill down the spine. Slaves were a profitable commodity, and proof that trading and raiding were not mutually exclusive activities. 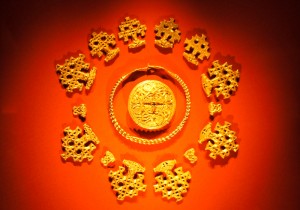 Golden hoard from the island of Hiddensee off the north coast of Germany, 950-1000 AD. Image copyright Paris Franz, all rights reserved.

The exhibition highlights the Viking fondness for treasure and ostentatious display. A huge gold neck ring from Denmark weighs in at over 2 kilograms and can’t have been comfortable to wear, while the enormous silver brooch from Penrith in Cumbria weighs 650 grams. Its primary function was to fasten a cloak at the shoulder, but it could easily double as a weapon if the occasion arose.

The exhibition also features a number of treasure hoards from around the Viking world, no doubt buried at times of trouble. There’s the Vale of York Hoard, discovered in 2007 and displayed in full for the first time. There’s the Hiddensee Hoard from northern Germany, and the Gnezdovo Hoard from Russia. The Vikings, either through trading or raiding, and probably both, amassed great wealth.

The Vikings: Masters of the Seas

While the tone of the first half of the exhibition is quite restrained and academic, the visitor gets a taste of the scary Viking legend in the final gallery. Roskilde 6, the longest Viking ship yet found at 37 metres, dominates the hall. The ship was discovered in 1997 in Roskilde in Denmark, during building work at the Viking Ship Museum, appropriately enough.

Archaeologists found 20 percent of the original timbers, which are now arranged in a steel frame support.

Its sheer size is stupefying, and it is not hard to imagine the consternation felt by those who saw such ships appear on the horizon, from the monks at Lindisfarne to the inhabitants of Constantinople, or Miklagard, as the Vikings called it. The ships were narrow and shallow, enabling them to sail down rivers as well as across the seas, besieging Paris in 885 and attacking London in 994 and 1013.

The adjacent display cases show something of the reality of Viking warfare, with helmets, swords and a grimly grinning jawbone, complete with filed-down teeth. That must have been a sight to send people running for the hills.

Not that the Vikings always got their own way.  A mass grave excavated in 2009 in Weymouth in Dorset revealed 51 decapitated bodies; Vikings who fell afoul of their Anglo-Saxon enemies.

The Vikings: a Warrior Society

There was a lot more to the Vikings than just rape and pillage, but it’s impossible to deny that the warrior ethos was at the core of their society.

There was a reason they earned the moniker of Viking, old Norse for ‘pirate’ or ‘raider.’

The word has come to encompass the wider Scandinavian culture between the late 8th century and the early 11th century, but the exhibition shows us we shouldn’t lose sight of its origin.

Vikings: Life and Legend at the British Museum runs from 6 March to 22 June 2014.

© Copyright 2014 Paris Franz, All rights Reserved. Written For: Decoded Past