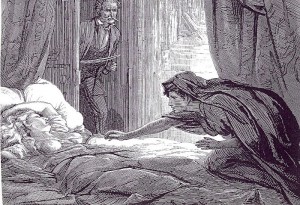 Vampire charlatans acted like the living dead to get what they wanted. Image by David Henry Friston.

Historically, the belief in vampires has existed in many countries; most prevalent in the Slavic regions. People feared the creatures because they believed vampires could create droughts, crop failures, diseases, nightmares and poltergeist activity. According to legend, vampires could shapeshift into different animals; including cats, wolves and snakes. There were also European cases of vampire chicanery created to benefit the charlatans. These scammers profited from their fellow citizens’ fears.

According to Rosemary Ellen Guiley in her book, The Encyclopedia of Vampires, Werewolves and Other Monsters, an unnamed man wore a shroud with bells sewn into it, a white cap and socks; daily visiting a recently widowed woman who lived with her in-laws, usually around midnight, in what is now Hungary. Other household members were so frightened that they ran from the house. When his visit was over, he left the house, screamed and rang the bells to imitate the sounds that people believed vampires made. After several months, suspicious young men captured the so-called vampire and revealed him as the family’s neighbor.

The couple confessed that they were having an affair, had poisoned her husband and decided to have the neighbor disguise himself as a vampire, so people would think that he was her dead husband. This scared the others out of the house so they would have a place to meet and continue their relationship. The result? A death sentence for both.

Guiley also tells us that after World War I, Slavic Muslim Gypsies feigned vampiricism and travelled from town to town. They damaged crops and scared people, usually by throwing stones from rooftops during the night. The terrified people fled from their homes. The “vampires” eluded the police–until they stopped at Decani.

The village monastery’s abbot climbed on top of the roofs and saw the men throwing stones while the women and children stole crops from the fields and property from inside homes. He or someone called the police which ended the “vampire’s” thefts.

Professor T. J. Vulkanovic wrote that his uncle was a charlatan vampire during the 1912-1913 Balkan Wars. His uncle covered himself with a sheet and travelled around local villages for liaisons with young women. The uncle told the girls he was a vampire, so he could have his way with them. Finally, one night, armed peasants in Zagradje chased him with their dogs and almost killed him. He then stopped his illegal jaunts. Vulkanovic’s account is in Jan L. Perkowski’s book, Vampire of the Slavs, in the chapter appropriately titled “The Vampire.”

Vampires Through the Ages

Over the years, unethical people have used ‘vampires’ as a way to avoid trouble or take advantage of the unwary.

Whether they were trying to steal crops or get friendly with local girls, fake vampires in many different forms captured the attention of those around them. Unfortunately, as you can see, the vamp’s tales typically had unhappy endings.

Guiley, Rosemary Ellen. The Encyclopedia of Vampires, Werewolves and Other Monsters. (2005). Checkmark Books.