As tensions between Ukraine and Russia hit the headlines, and suspiciously well-trained men in balaclavas clash with Ukrainian soldiers, it is perhaps a good time to ponder the long view.

Ukraine is an old culture and a new country, and its 20-odd years of independence since the break-up of the Soviet Union has not changed its harsh reality. Ukraine has always lived on the edge, caught between empires.

Ukraine and the Perils of Geography

The history of Ukraine is intimately linked to its geography. Its flat, fertile plains, the western edge of the vast Russian steppe, and its abundant forests have tempted many invaders over the centuries. The country’s lack of natural defences made invasion easy, from the time of the Mongols onwards.

Russians, Poles, Lithuanians, Ottoman Turks and the Austro-Hungarian Empire have all done their best at varying times to carve Ukraine up among them. Ukraina is literally translated as ‘on the edge’ or ‘borderland’ and that is exactly what the country has been for much of its history. It’s an uncomfortable place to exist.

It wasn’t always so. From the tenth to the twelfth centuries, the kingdom of Kievan Rus was a light in the darkness, a golden age. Ruled from Kiev, it became the largest kingdom in medieval Europe, renowned for its prosperity and justice. Founded by Vikings who rapidly went native, Kievan Rus was the Slavs’ first great civilisation. Its legacy has been hotly contested by Russians and Ukrainians ever since.

Kievan Rus was, however, a delicate construction, increasingly weakened by division within and attacks from nomadic tribes without. In the end it could not withstand the brutal whirlwind that was the Mongol invasion. The great city of Kiev was all but destroyed by the armies of Batu Khan, grandson of Genghis, in 1240.

By the time Ukrainians shook off the Mongol yoke, Kiev was a backwater, and Ukraine a battleground. Power had transferred to the rising Duchy of Muscovy and much of what is now Ukraine fell to the turbulent and pagan Lithuanians who moved in to fill the vacuum left when the Mongols retreated. The Lithuanians quadrupled the size of their Duchy in less than a hundred years, their territory extending from the Baltic to the Black Sea.

The Lithuanians allied themselves with Poland, their Grand Duke Iogaila being crowned King of Poland in 1386. For nearly three centuries, the Polish royal capital of Cracow ruled the territory of modern Ukraine.

The Rise of the Cossacks 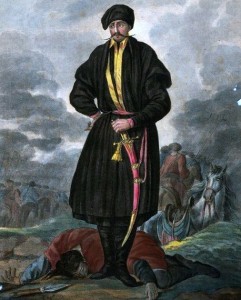 The Ottoman threat grew closer after the fall of Constantinople to the Turks in 1453. Ukraine was mostly shielded from them by the Crimean Khanate, an Ottoman protectorate that acted as a buffer state.

The Grand Dukes of Lithuania started building a line of forts in the wild, no-man’s land between the Duchy and Tatar-ruled Crimea in the 15th century. Initially garrisoned by Tatar mercenaries called ‘kazaks,’ they soon attracted runaways of all types. Before long these makeshift communities turned into semi-autonomous societies with their own elected leaders, or ‘hetmans.’

Known today as Cossacks, they periodically raided deep into Polish territory, prompting the Poles to attempt to re-direct their aggression eastwards, towards Muscovy and the Turks. They obliged, attacking such Ottoman outposts as Trebizond and Varna and burning Constantinople twice.

The Main Archive of Early Records in Warsaw holds a collection of diplomatically angry letters from the Ottoman sultans to the Polish kings, complaining of the raiders’ depredations.

Not that this meant they didn’t attack Poland any more. The Cossack uprising led by Bohdan Khelmnytski has gone down in legend as the first great Ukrainian war of independence. Although, if independence was really his aim, it failed miserably.

To begin with, Khelmnytski’s forces scored victory after victory over the Poles in a campaign accompanied by wide scale massacres and looting. But things changed in 1651 when the Crimean Tatars deserted and the Cossacks suffered defeat at Berestechko. Khelmnytski needed an ally, and he turned to Russia.

Khelmnytski signed a treaty with Muscovy at Pereyaslav in January 1654, pledging Cossack and, ultimately, Ukrainian loyalty to Moscow. Over the next thirty years Russian, Polish, Cossack and Tatar armies swept through Ukraine in a series of wars that the Poles called ‘The Deluge’ and the Ukrainians referred to as ‘The Ruin.’

The situation only came to an end in 1686 when Russia and Poland signed an ‘eternal peace,’ handing Kiev and all lands east of the Dnieper River over to Muscovy. The Cossacks weren’t consulted.

Poland Partitioned and the Borders Move once More

By 1795, Poland had suffered much the same fate as Ukraine, disappearing from the map and partitioned by an increasingly expansionist Russia, Prussia and the Austro-Hungarian Empire. The story of Lviv, some 50 miles from the modern Polish-Ukrainian border, illustrates how mutable the region’s ever-shifting borders are.

Austria ruled Lviv from 1773 to the collapse of the Austro-Hungarian Empire in 1918, during which time it was known as Lemberg. The city then returned to a reborn Poland, which renamed it Lwow. It fell to the Russians in 1945, who deported the Polish population and renamed the city Lvov. With Ukrainian independence in 1991, it finally became Lviv.

In Ukraine nothing is certain, not even a town’s name.

Locked firmly within the Russian embrace, Ukraine was both the breadbasket of the Soviet Union and in many ways its nemesis, home to both a self-reliant peasantry and the Soviet Union’s most turbulent ethnic minority. Much of the Civil War that followed the Russian Revolution in 1917 was fought in Ukraine, while the forced collectivization of agriculture was a nightmare come to life.

The infamous famine, hushed up for years and widely considered to have been deliberately engineered by Stalin to punish those who resisted collectivization, claimed some five million lives by March 1933.

And then came World War Two, when 5.3 million Ukrainians died, over two million of them Jewish. With a choice between Stalin’s Russia and Nazi Germany, many Ukrainians were hard put to decide which was worse. The phrase ‘stuck between a rock and a hard place’ comes to mind.

The Red Army conscripted most Ukrainian combatants, while a large number fought for the Germans. Others, like the Ukrainian Insurgent Army, fought both.

Ukraine’s post-war reality saw the return of the dour embrace of the Soviet Union. Ukrainian nationalism existed, but remained largely underground. The country was, and still is, closely identified with Russia, at least by the Russians. It is also a buffer against the West, about whom the Russians have always been ambivalent.

When independence came, with the collapse of the Soviet Union in 1991, it took many people by surprise. Perhaps it should come as no surprise that we are now seeing the fallout. Russia may no longer be an empire, but it is big and powerful and on the border, just as it has always been.

© Copyright 2014 Paris Franz, All rights Reserved. Written For: Decoded Past

Reid, Anna. Borderland: A Journey Through the History of Ukraine. (1997). Phoenix.