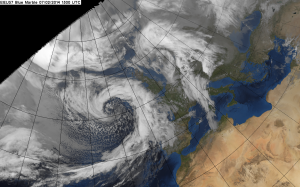 Weather systems such as this, photographed on 7 February 2014, are nothing new in the UK. Image courtesy of the Met Office, used with permission, all rights reserved.

It’s 2014, and following the wettest January on record in the United Kingdom, the country’s Meteorological Office continues to release storm warning after storm warning – and the organisation’s chief scientist has linked the continuing poor weather with a changing climate.

With large swathes of southern England under water – some having been flooded for over a month – national news media quoted Dame Julia Slingo as saying that “all the evidence suggests there is a link to climate change”; although she also noted that there’s no conclusive link between the two.

The Met Office may have couched the official summary on the recent run of bad weather in suitably formal terms; but the nation’s tabloids pull no punches, naming the next weather system “Superstorm Charlie” and warning that it will be worse than the largest storm in living memory, the hurricane-that-never-was of October 1987.

The truth, however, is that Britain’s maritime location leaves it in the path of many an Atlantic storm and that, over time, many more significant weather events have occurred – probably the largest of them being the so-called “Great Storm” of 1703.

Although meteorological records are at best patchy, there is considerable contemporary description of the Great Storm, which the diarist John Evelyn and the novelist Samuel Pepys, among others, reported. From this, researchers at the risk management company RMS were able to construct an indication of the path of the storm, described as “a large deep and fast moving ‘daughter’ depression, with a central pressure falling to around 950 mb, embedded along the southern flank of an enormous and deep depression centred to the northeast of Scotland, and flanked by a band of high pressure over France.”

The storm, which began on November 26, was not a sudden event. From collected sources, the chronicler Gideon Harvey recorded that: “It had blown exceeding hard for fourteen days before, insomuch that it was thought terrible weather.” But the worst was still to come and when it did so it came quickly.

The RMS retrospective plots the path of the centre of the depression as it moved across central and southern England at a speed of 45 mph and the document indicates that the highest winds ravaged the country for a period of just a few hours before continuing across the North Sea.

Short-lived the height of the storm may have been, but while it endured it brought terror. “In this general apprehension,” noted Harvey, “none durst quit their tottering habitations…the bricks, tiles and stones, from the tops of the houses, flew with such force, and so thick in the streets, that no-one thought to venture out, though their houses were nearly demolished.”

And when it was over? It was time to assess the damage. Again, the contemporary records are the primary source and it seems that nature wrought unprecedented havoc upon man. Damage to property is unquantifiable, but estimates suggest that around 2,000 chimney stacks collapsed in London and the storm demolished whole houses in the same city. Thousands of properties were destroyed elsewhere; in a telling detail, RMS notes that the windmills whirled round in such frenzy under the force of the wind that the friction caused them to catch fire.

For those not on terra firma there was even greater carnage. Daniel Defoe reportedly saw 700 ships destroyed in the Pool of London (according to Harvey, just four vessels rode out the storm) and for those caught at sea, there was little or no hope, with the loss of an estimated 8,000 men. Harvey again, in his painstaking compilation of contemporary records, lists incident after incident in which individuals, some of whom he names, lost their lives including the “dismal incident” in which the Bishop of Bath and Wells and his wife died under a hail of falling masonry.

Was This Really the Greatest Storm?

So, did the events of 1703 secure their place in history because they devastated the south-east and the capital, or did they really represent the country’s greatest storm?

It appears more likely that the former is true. In a ranking of such events, Dennis Wheeler rates the 1703 storm only fifth highest, exceeded by those of 1694, 1825, 1792 and, the largest of them all, 1987. Large storms are a fact of life on the Atlantic seaboard – and if the tabloids are right, the southern part of the UK may yet, in the near future, see a storm to match the one they still call “The Great.”

Sorry. No data so far.