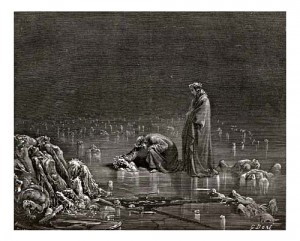 Historically, treason was one of the most grievous sins. In Ancient Rome traitors were thrown onto the Tarpeian rock from the Capitoline Hill. In Dante’s Inferno, Brutus and Judas Iscariot occupied the lowest tier of torment; both had betrayed their lord. Medieval culture, which thrived on a system of patronage and obligation between lord and serf, placed a high value on homage and fealty; treason was a grave threat to the system.

The birth of the American nation contains stories of heroism and sacrifice; popular historical mythologies attribute almost superhuman powers to the founding fathers and many of their supporters. These stories of triumph and glory are pitted, however, against less admirable people and events. 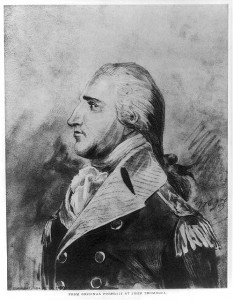 Benedict Arnold was branded a traitor for his actions in the American Revolution. Despite later self-rationalization, Arnold put the independence movement at great risk. Image courtesy of the US Library of Congress.

History declares Benedict Arnold, who attempted to turn West Point over to the British, to be the first American traitor. After the Revolution, Arnold tried to rationalize his behavior in a London Chronicle letter (November 11, 1780) but his actions remain historical fact.

In 1794 during the Washington presidency, leaders of the Whiskey Rebellion were transported from western Pennsylvania to Philadelphia to stand trial in the first federal treason trials. In August 1807, former Vice President Aaron Burr faced the United States Circuit Court for Virginia on treason charges.

What is treason? Treason is defined in the Constitution, Article III, Section 3: “Treason against the United States, shall consist only in levying War against them, or in adhering to their Enemies, giving them Aid and Comfort…”

In 1947, the Supreme Court, in Haupt v. United States, focused on “overt acts” of helping the enemy as treasonous. In another case related to World War II, Kawakita v. United States, the court was asked to determine if actions by American citizens outside of the United States could be considered overt acts. According to Constitutional scholar Alfred H. Kelly, “treason was an offense without territorial limits” (The American Constitution: Its Origins & Development). 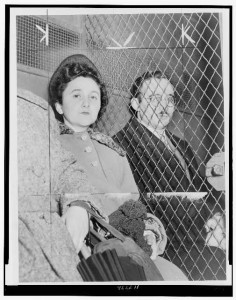 The Rosenbergs were part of a plot resulting in atomic secrets disclosures to the USSR. Both were executed in 1953 for their treasonous actions. Photo by Roger Higgins.

In June 1953 Julius and Ethel Rosenberg were convicted of espionage and executed: the Rosenberg’s actions may have led to the passing of atomic secrets to the USSR. An FBI summary of the atom spy case refers to them as “American traitors.”  It was a time when Communism was viewed as the greatest threat to Western democracy and individual freedoms.

Not everyone agreed. Supporters of the Rosenbergs petitioned President Truman for clemency much like supporters of Edward Snowden today, who have created an on-line White House petition asking for a presidential pardon. Snowden is the self-professed whistleblower who divulged NSA secret documents to The Guardian. Senator Dianne Feinstein, Chairman of the Senate Intelligence Committee, however, told reporters, “I don’t look at this as being a whistleblower. I think it’s an act of treason.”

Snowden’s actions are also reminiscent of Daniel Ellsberg’s disclosures to the New York Times of secret government documents during the Vietnam War; the newspaper published the Pentagon Papers in 1971. Like Snowden, Ellsberg defended his actions by labeling government actions regarding Vietnam as unconstitutional.

The Man Without a Country

Snowden stated in a Guardian interview that he did not want to live in a country that spied on its own people. Throughout much of the early- to mid-twentieth century, American students read Edward E. Hale’s 1863 fictional short story, The Man Without a Country, in which an American Army officer is tried for treason in conjunction with the 1807 Burr conspiracy. During the trial the accused, Philip Nolan, states that he never wants to hear of the United States again. He gets his wish.

Nolan’s punishment is to live aboard different ships that keep him from ever seeing America again. People he comes in contact with never mention the United States and he is denied any printed matter relating to his country. At his death, fifty years later, he admits to a change of heart: “…There cannot be a man who loves the old flag as I do…” The man without a country’s purgatory resulted in a genuine love for his country and what it had become.

In 1953, President Eisenhower refused any final attempts to stop the executions of Ethel and Julius Rosenbeg, saying “…I can only say that by immeasurably increasing the chances of atomic war the Rosenbergs may have condemned to death tens of millions of innocent people all over the world.”

Edward Snowden states that he is neither a hero nor a traitor. Bradley Manning, facing charges for his role in the WikiLeaks affair, has defended himself in much the same way. However, according to government spokespersons, Snowden and Manning may have compromised the security of Americans, assisted terrorists, and placed U.S. forces in greater danger as they serve abroad.