The physicians of the Song Dynasty are far too numerous to list all of them here. The following is a brief summary of those whose contributions were original or revolutionary in some way. Image by Decoded Past.

The Song Dynasty (960-1279 C.E.) may be the most brilliant period in the history of Chinese culture – comparable to the Renaissance in the West. It was a time of enormous social and economic change, as well as technological and intellectual advancement.

Both private academies and state schools flourished during the Song Dynasty. It is therefore not surprising that Traditional Chinese Medicine (TCM) advanced significantly during this period as well.

One invention that contributed indirectly to the advancement of medicine was movable-type printing. Starting in 1057, the Chinese republished many traditional medical manuscripts in print volumes, with commentaries by respected physicians. This greatly facilitated the dissemination of medical knowledge.

They also compiled new medical books and published them under the aegis of the emperors; there were many privately-published books about medicine and pharmacology as well.

The Redefinition of Medical Practice: From “Technicians” to “Scholars”

Another step forward was the establishment of official educational faculties for physicians. A national medical authority began, and the authority required students to pass exams in order to gain official status as doctors.

Formal medical education departed greatly from the way earlier generations of Chinese medical practitioners had kept their knowledge a carefully guarded secret, transmitting it only to their apprentices.

Medical practitioners had formerly been regarded as “technicians,” and therefore considered as ranking on a low intellectual level. In contrast, during the Song Dynasty, medical practice experienced a redefinition as an “intellectual and scholarly” pursuit, and the social status of doctors rose accordingly.

In another significant step forward, Song dynasty emperors promoted medical research within the compound of the imperial palace. Using the bodies of the deceased, Song physicians studied internal anatomy.

Academic freedom characterized the Song Dynasty as intellectuals experienced the freedom to discuss and debate long-accepted ideas and theories in all fields. In medicine, doctors encouraged a serious reconsideration of disease causation, as they deemed this essential to the development and refinement of treatment practices.

Simplification and Standardization of Medical Treatment

During the Song Dynasty, the entire medical field went through a reformation evaluated and modernized older theories and practices, rather than rejecting them. They elaborated on previously accepted theories such as that of the Five Circulatory Phases and the universal life force, Qi, in greater detail.

In addition, physicians promoted simplified and standardized medical treatments as well as the classification of the various bodily systems, illnesses, and diagnostic and treatment methods. For the first time, the functions of the organs received classification. In addition, the medical authorities assigned tastes and temperatures to specific herbs, in accordance with their yin or yang nature. 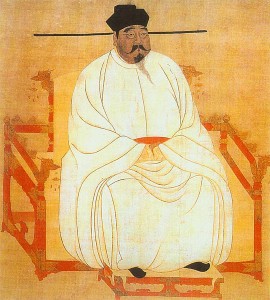 Shown here is Song Taizu, the founder of the Song dynasty. Image courtesy of Kolyushka.

Herbal medicine is a very basic and ancient component of TCM. But, prior to the Song Dynasty, the Chinese considered herbal treatment as a subfield of Taoism or Buddhism. As such, it was generally administered by folk practitioners or monks rather than licensed physicians.

During the Song Dynasty, physicians incorporated the use of herbal medicine into the standard training and practice of Chinese medical doctors licensed to practice medicine as a profession, rather than an avocation. The Materia Medica of the Jia You Era listed 1082 herbs; the pharmacopeia compiled and published by Zhang Yu-Xi and Su Song between 1057 and 1060.

Similarly, dietary management is a cornerstone of TCM; and, like the use of herbs, it gained renewed interest and respect by Song medical scholars.

A remarkable achievement of the Song Dynasty was that of making medicine available to a wide range of the general public – not only the elite. T. J. Hinrichs writes that “literati were making pragmatic knowledge more transparent for the sake of spreading benefit as widely as possible.”

A Golden Age in Chinese History

The Song Dynasty was a period of intellectual development unparalleled in Chinese history. The cultivation of rice and its adoption as a staple food led to the doubling of the population. During this period, the Chinese invented or adopted many cultural artifacts (such as gunpowder, moveable type, the distinctive Chinese rooftop, and the practice of foot-binding, to name a few) considered today as the most distinctive aspects of Chinese culture.

Unfortunately, the military might of the empire was insufficient to withstand the Mongolian invasion that lasted for several decades, and the Song Dynasty finally fell in 1279.