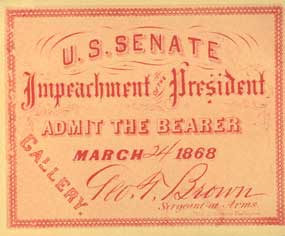 The President, Vice President and all other civil Officers of the United States, shall be removed from Office on Impeachment for, and Conviction of, Treason, Bribery, or other high crimes and Misdemeanors.

The Historical Role of Impeachment in the United States

When the framers of the Constitution incorporated impeachment into the document, they were strengthening the concept of “checks and balances” as well as providing a legal, roadmap for the removal of persons from government offices. Some Constitutional scholars note the ambiguity of the chargeable offenses. What constituted high crimes and misdemeanors?

During the Thomas Jefferson administration, the government used the impeachment process to attempt the removal of Samuel Chase, an Associate Justice of the Supreme Court. In that case, the actions against the judge were purely political and Chase was acquitted.

Using the impeachment process solely to achieve partisan goals was not the intent of the Constitution’s framers but the prospect has historically been tempting. President Bill Clinton went through impeachment during his second term and was not convicted. Earlier, President Richard Nixon would have faced impeachment over his role in the Watergate scandal had he not resigned. The first attempt to remove a president, however, was in the politically stormy years after the Civil War.

The impeachment of Samuel Chase during the Thomas Jefferson administration was motivated by political desires to limit the Federalist presence in the Judiciary. Chase was not convicted.

In February 1868, Congress took the extraordinary step of attempting to remove President Andrew Johnson through the impeachment process, voting eleven articles, three of which charged him with conspiracy to violate a federal statute. The trial took place in the Senate with Chief Justice Salmon P. Chase acting as presiding judge. Falling one vote short of the required two-thirds majority, Johnson was acquitted.

Johnson and the Radical Republicans

Johnson became President upon the death of Abraham Lincoln in April 1865. He had been the only Senator from a Southern state not to resign his office when the Civil War began; Johnson was a Democrat and strongly pro-Union, facing a stormy relationship with the so-called Radical Republicans in Congress. The radicals’ view of Southern “reconstruction” was vastly different from both Lincoln and Johnson’s approach, favoring a harsh humiliation intended to punish Southern whites and destroy the systems that created planter elites which controlled the ante-bellum South.

President Johnson was viewed by the radicals as a threat to their version of Southern reconstruction. Led in the House by Pennsylvania’s Thaddeus Stevens and in the Senate by Charles Sumner from Massachusetts, radicals believed that Southern secession was an act of state “suicide” and that the South was politically dead. Lincoln and Johnson had different views, never accepting the validity of secession. Presidential reconstruction focused on restoring the states quickly and with “malice toward none…” Johnson used his authority to grant amnesty liberally, including the former leader of the Confederate States, Jefferson Davis.

Additionally, Johnson interpreted the Constitution strictly, vetoing acts of Congress like the Freedman’s Bureau bill. According to Johnson, reconstruction legislation favored by the radicals was unconstitutional, representing an over-reach of congressional powers. Prior to the Civil War, presidents used their veto power irregularly, primarily because both Congress and the executive branch included the test of constitutionality in their crafting and support of legislation.

The Tenure of Office Act

In March 1867, Congress passed the Tenure of Office Act. This legislation made it illegal for the President to remove a government appointee without the consent of Congress. Johnson vetoed the act, believing it to be unconstitutional. Congress, however, overrode the President’s veto. After the congressional session ended in August 1867, President Johnson replaced his Secretary of War, Edwin Stanton, with Ulysses Grant. Under the act, this was an ad interim appointment, legal as long as the returning congress approved.

When the new congressional session began, however, Grant resigned and Stanton resumed the cabinet position. Johnson subsequently replaced him with General Lorenzo Thomas. Within days, the House of Representatives voted eleven articles of impeachment. The trial was held in the Senate. Andrew Johnson was acquitted by one vote. Significantly, Senator Ben Wade, who would have been the next in the line of succession to be President, voted for conviction. Wade was a Radical Republican.

Impeachment and the Obama Administration

In August 2013 Oklahoma Republican Senator Tom Coburn made extensive remarks involving President Obama and the impeachment process. The comments came during a town meeting in Muskogee, Oklahoma. Coburn referred to “historical precedent,” and stated that there may be, “intended violations” in the current administration. Is this simply incompetence by White House staffers, as Coburn willingly admits, or are there actual “crimes and misdemeanors?” Significantly, when Coburn first used the term impeachment, the audience burst into applause. The media, however, referred to Coburn as being, “way out of bounds.”

Conservatives have consistently stressed a narrow interpretation of the Constitution. Post-modern justification of high crimes and misdemeanors, however, would, ironically, require a broad view of impeachment. Interestingly, in 1804 a Congress that favored the narrow view also broke with ideology to impeach and remove Judge John Pickering on the basis of insanity. In 1867 and 1868, President Johnson followed a narrow, strict constructionist view of the Constitution when he vetoed legislation, including the Tenure of Office Act. The Radical Republicans had to follow a broad constructionist view in order to proceed with impeachment.

Most Americans, as in the late 1860’s, know very little about the process and are more swayed by emotional arguments as was the case with Bill Clinton. President Clinton may have been guilty of perjury, but most Americans fixated on his very graphically retold acts of infidelity. Any thoughts of impeachment of Barack Obama invite the charge of racism, cloaking any alleged legitimate charges of illegal actions. Impeachment becomes a distraction, leaving observers to speculate the political ramifications rather than a strong bipartisanship designed to address the myriad of problems facing the Republic.

Impeachment may appear as a last resort effort to members of Congress who, as in the post Civil War period, refused to compromise and not get their way. Short of an actual crime or misdemeanor, impeachment ends up as the worst possible partisan tool that invariably skirts real issues and distracts from national problems.