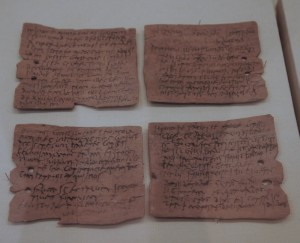 Octavius writes to his brother Candidus detailing his business ventures, asking for money and complaining about the roads. Image by Paris Franz, all rights reserved.

Yet, if any archaeological finds can be said to be treasures, the Vindolanda tablets surely qualify. A selection of letters, lists and memoranda from the distant frontier of the Roman Empire, these tablets shine a light on the lives of real Romans from the late first and early second centuries.

To read the Vindolanda Tablets is to experience the shock of recognition; to realise these people, so far removed from us in time, did many of the same things we do. They make shopping lists and complain about the roads. They ask for leave; they rebuke friends for not writing. They request more beer.

Here is a transcript of one of the most famous tablets, an invitation to a birthday party, dated to around 100 AD:

Claudia Severa to her Lepidina, greetings. On 11 September, sister, for the day of the celebration of my birthday, I give you a warm invitation to make sure that you come to us, to make the day more enjoyable for me by your arrival, if you are present. Give my greetings to your Cerialis. My Aelius and my little son send him their greetings.

I shall expect you, sister. Farewell, sister, my dearest soul, as I hope to prosper and hail.

The tablets also shed light on a little-known period; the time between the short-lived Roman advance into Scotland under the governor Agricola and the building of Hadrian’s Wall. The details from Agricola’s recall to Rome in the 80s AD to the arrival of Hadrian in 122 were absent from the archaeological record until the discovery of the tablets at Vindolanda in 1973.

Archaeologist Robin Birley found the tablets in a layer of black, organic material at the bottom of a trench. Birley and his team found textiles and leather items as well as thin slivers of wood that bore what looked like writing.

It was difficult work. The earliest period of the fort is some four metres below the modern surface, but the water table was well above this. Thousands of gallons had to be pumped out. Yet the tablets owe their survival to the wet, anaerobic conditions.

Deciphering the text proved to be an even greater challenge. The Vindolanda tablets are written in Old Roman Cursive, a type of writing current in the first three centuries AD, and not easy to decipher even when written clearly – and many of the tablets were faded, abraded or downright illegible, and sometimes all three.  Scientists had to subject the tablets to electronic imaging and infrared photography to make the ink more visible. Researchers called in expert papyrologists, who experienced many a headache before they could decipher the texts.

Life on the Roman Frontier

Birthday invitation from Claudia Severa to Sulpicia Lepidina, wife of the prefect of the ninth cohort of Batavians at Vindolana. Image by Paris Franz, all rights reserved.

Rome built the first fort at Vindolanda, one of a series of forts on the road known as the Stanegate that connected Carlisle to Corbridge, in approximately AD 85.

The site lies halfway between the North Sea and the Solway Firth, on an escarpment defined by the stream known as the Doe Sike.

To the north, the ground rises up to the rugged crags of the Whin Sill, where Hadrian’s Wall would be built some 40 years later. The fort’s name is Celtic; Vindos means ‘white’ or ‘shining’, and survives in the word winter, the white season. Landa means ‘enclosure’ or ‘lawn’.

The tablets give us a picture of the Roman community on the frontier. Auxiliary units, at this period the first cohort of Tungrians and the ninth cohort of Batavians from northern Gaul, manned Vindolanda. It was standard Roman practice to recruit auxiliary soldiers in one part of the empire and deploy them in another, to lessen the chance of revolt.

One of the earliest and most important of the tablets is a strength report, detailing the whereabouts and duties of the Tungrians. They numbered 752 men, but they were split between Vindolanda and forward bases, with a detachment assigned to the Governor in faraway Londinium. There was clearly a great deal of movement on the border, which was not a fixed deployment.

Literacy in the Roman World

Wax tablets made up around 20 percent of the discoveries. Made of spruce or larch, they were imported ready-made into Britain with a hollowed-out front, filled with beeswax, ready to be incised with a stylus. In nearly all cases the wax has perished.

The so-called ‘leaf’ tablets, written with ink, were the real surprise, being scarcely known before Vindolanda. They were probably an invention of the north-west of the empire, where papyrus was too expensive for everyday use. Most of the tablets were made of alder or birch, which grew in abundance around Vindolanda, and the ink was made of a mixture of carbon and gum Arabic. They were normally scored down the middle so they could be folded, and the address written on the outside. The number of letters sent to Vindolanda from other places show this technology was widespread; other examples have subsequently been found at Carlisle.

The letters, lists and memoranda show a wide range of handwriting, from the elegant hand of the prefect of the ninth cohort of Batavians Flavius Cerialis to the scrawl of ordinary soldiers. Most of the latter had Roman or Celtic names, but some signed their messages with Greek names. In the Latin west a Greek name often meant their bearers were slaves or freedmen. In addition, some of the tablets are written in a similar hand, implying a scribe wrote them. However, the author of the message often signed them, giving us an insight into the spread of literacy across the social divide in the Roman world.

Archaeologists continue to find tablets at Vindolanda, revealing yet more aspects of everyday life on the frontier.

Script, Image and the Culture of Writing in the Ancient World. Vindolanda Tablets Online. (2014). Accessed on February 19, 2014