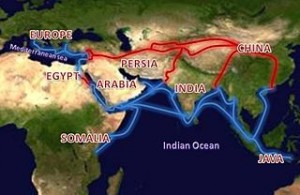 Via the Silk Route (also called The Silk Road), goods were traded over thousands of miles and, along with the trade of goods, there was much cultural exchange. Image courtesy of Wikiality123

The T’ang dynasty (C. 618-960 CE) was a golden age in Chinese civilization. Governmental stability led to enormous economic expansion, facilitated by an extensive system of peaceful trade routes. This era saw the spread of Buddhism and later, Confucianism, in which the every realm of culture flourished. There were also many breakthroughs in the field of medicine during this time. During the T’ang dynasty, the principles of Traditional Chinese Medicine (TCM) spread via the Silk Road, which connected China with the rest of Asia, the Middle East, and Europe.

TCM and the Quest for Eternal Life

A prime motivation for developing medicine during this era was the search for a way to extend the lifespan. The T’ang emperors, seventeen of whom are reputed to have experienced untimely deaths as a result of using alchemical formulas for longevity, funded this quest.

Practitioners prescribed foods such as pine seeds, chamomile, and the li-shi mushroom to prolong the lifespan. Despite a failure to produce the elixir of everlasting life, Chinese herbal medicine advanced brilliantly during this period.

In 657 C.E., Emperor Gaozong commissioned the revision of the standard textbook on medicine and pharmacology, the Yellow Emperor’s Internal Classic. This updated version, the Yaoxing Lun (Materia Medica of Medicinal Properties) is a comprehensive reference work on Chinese medicine and pharmacology. It contains entries on 850 medicinals, alongside numerous detailed illustrations.

After the decline of the T’ang dynasty, the Yaoxing Lun was lost for almost a thousand years, until archaeologists discovered a copy at the Dunhuang Grottoes in 1900. Since that finding, TCM practitioners all over the world have used this text as a basic reference manual. 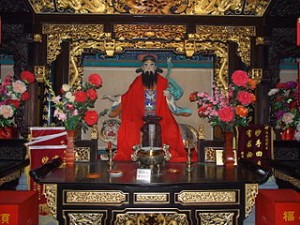 Sun Sumaio is one of the greatest scholars in Chinese history, and a great contributor to the advancement of medicine. Image by Tineke Degeling

Chinese scholar, Sun Simiao, studied the religious philosophies of Taoism and Buddhism, as well as Chinese medical documents and folk medicine. His contribution to TCM was the synthesis of the theory with the practice of medicine in his text, Qian Jin Yao Fang (Essential Formulas Worth a Thousand Pieces of Gold). This book divides illnesses into hundreds of categories according to how they effect the internal organs of the body, and includes 5,300 prescriptions, many of which Sun Sumaio created himself.

The appendix to this work- Qian Jin Yi Fang (Supplement to Essential Formulas Worth a Thousand Pieces of Gold) – deals primarily with herbal medicines, and is considered a significant contribution to TCM.

Sun Simaio investigated 873 types of medical materials. However, he maintained one of the age-old principles of TCM: if any ailment could be prevented by consuming particular foods, that would be a better approach. Maintaining a healthy diet and lifestyle remains a basic tenet of TCM to this day.

During the T’ang dynasty, TCM practitioners  greatly improved their understanding and treatment of diabetes. Wang Shou, (752 C.E.), was the first Chinese physician to recognize that patients with diabetes have excessive sugar in their urine. Sun Sumaio was the first to prescribe the avoidance of alcoholic beverages and starchy foods to prevent and treat diabetes.

These advances in the understanding and treatment of diabetes precede similar discoveries in Western medicine by a thousand years.

TCM used an amalgam made of tin and silver to fill cavities – this predates a similar invention of Western medicine by almost a thousand years. The first documented use of this dental amalgam appears in Su Kung’s Hsin Hsiu Pen Tsao, written in 659 C.E. The next written document that mentions this kind of dental amalgam appeared over 800 years later in Germany, in 1528 C.E.

Education and Licensing of TCM Physicians

The founder of the T’ang dynasty, Li Shih-Minhe, established the first school of medicine in 629 C.E. Succeeding T’ang dynasty emperors fostered the advancement of medicine by supporting medical colleges, publishing medical manuals, and enforcing quality through government licensing of physicians, the administration of standard exams, and the promotion of doctors based on merit, rather than nepotism. Although these may sound like logical and ordinary standards to the modern reader, they were, in fact, a rare innovation for any society a thousand years ago.

TCM has always prescribed a healthy diet as the best medicine, image courtesy of 朕邦萬広

The Spread of Traditional Chinese Medicine

Because the T’ang dynasty emperors were able to ensure the safety of travel over the vast Silk Route (both on land and on sea), the theory and practice of Traditional Chinese Medicine spread throughout Asia and to the Middle East and Europe during that era. The great advancements in many intellectual and cultural areas seem comparable to the spread of knowledge today, with the “flattening” of the world due to Internet connections. TCM is enjoying a resurgence of interest in the Western world today, and is increasingly accepted by the Western medical profession.