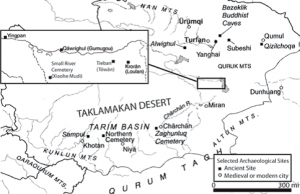 Both ancient and modern communities surround the Taklamakan Desert in the Tarim Basin. The climatic conditions here have preserved some human remains for thousands of years. Map used with permission of Professor Victor H Mair.

The Takla Makan desert is a barren area of the central Tarim Basin in the northwestern Chinese border district of Xinjiang. Almost in the centre of the Eurasian landmass, it was once part of the ancient Silk Road running from east to west.

The desert is an arid salt pan, with a temperature range of between -40º to 40º  Celsius. Since the early 1900s, a number of bodies, mummified by the dry heat and alkaline conditions, have been recovered from the area, .

The earliest examples date to around 2000 BC and are the remains of the earliest settlers of the Tarim Basin. With perfectly preserved clothing, hair and skin, the mummies are excellent specimens for the study of Bronze Age textiles and burial practices.

These mummies have also proven to be a conundrum. Despite beliefs that Europeans only entered the Tarim Basin via the Silk Road in the 12th Century AD, the mummies have distinctly Caucasian features, a fact the Chinese government has been reluctant to admit.

Who were these early European settlers of China?  And why did they make the Tarim Basin their home?

The Beauties of Loulan and Xiaohe

The Tarim Basin was not always so barren, which is one explanation for its settlement. Two thousand years ago, a city existed in the Loulan area, situated on the Silk Road running between China and the Roman Empire. Originally sustained by the waters of the Tarim River, Loulan was abandoned in the 4th century AD when the course of the river altered, leaving it without water.

The Beauty of Xiaohe was buried in woolen clothes and a hat with a feather in it. In life, her hair was long and fair. Picture used with permission of Professor Victor H Mair.

Two of the earliest Takla Makan mummies come from the area around Loulan; however, they predate the city by 2000 years. Buried between 2000 and 1500 BC, the artifacts found in their graves show a shared agrarian lifestyle and distinct northern European cultural markers.

Found in 1980, the Beauty of Loulan is so called because of her auburn hair and delicate features. Aged around 40 when she died, she has been dated between 2000 and 1800 BC.

Her grave goods show she came from an agricultural community that grew wheat and herded sheep. She was buried in woolen clothing, including a skirt, fur-lined leather ankle boots and a woolen felt cap with a feather. Although her clothing is predominantly brown, the cap was edged with a cord of plaited blue and red cords. Items she may have used in daily life, a woven basket for carrying grain, a winnowing tray and a comb, were placed above her head.

The Beauty of Xiaohe dates to around 1800–1500 BC. She was found buried at Small River Cemetery 5, a site to the west of Loulan. Like the Beauty of Loulan, she is well preserved, with long fair hair and eyelashes still in place. Her grave goods reflect a similar lifestyle to the Beauty of Loulan. She was buried with a woven basket and in woolen clothes, including a felt hat with a feather and an unusual string skirt, suggesting she came from an agricultural community.

The appearance of the two graves, and the women themselves, shows links to northern European cultures. Elizabeth Wayland Barber, a textile expert, has linked the cloth types to examples from the Caucuses. The style of clothing of the two beauties, as well as phallic poles running through the graves of Small River Cemetery 5, are also found in northern Europe. These indicators, along with the appearance of the two women, suggest that they were early European incomers.

South of Loulan, along the southeast edge of the Tarim basin, a further set of mummies with distinctly European features were discovered. The Cherchen mummies – three women, a man and a baby – date between 1000-500 BC. Their height, features and tartan clothing again suggest European origins. 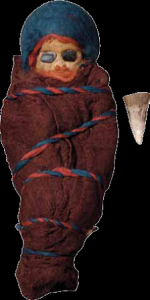 It has been speculated that the mummies represent a family group, although there is no proof. The seal on the tomb was broken and then resealed, suggesting the addition of one or more of the bodies to the burial at a later date.

Two of the women are badly decomposed, but the remaining woman, the child, and the man are perfectly preserved. Tattooing on their faces can be appreciated : a sheep’s horn design on the man’s temples and whorls and spirals on the woman’s face. The vivid dye in their clothing also remains bright. The woman’s dress still a visible red and the three-month-old baby’s cashmere bonnet a vivid blue.The baby was buried wrapped snugly in a blanket, with its cow horn cup and sheep udder bottle.

The adult male mummy, known as the Cherchen man, was in his 50s when he died. He is dressed in a purple-brown suit with red, yellow and blue stockings and white deerskin boots, and accompanied by no less than ten hats.

Both the woman and the man were nearly six feet tall. The tartan design of their clothing suggests a Celtic origin for the group; in fact, textile experts have identified the weave of the cloth as the same as that found on the bodies of salt miners in Austria in 1300 BC. This is not the only link to Celtic culture: dolmen-like structures, carved with icons similar to Sheela na gigs, marked the burial site.

Why the Tarim Basin?

Victor Mair, Professor of Chinese Language and Literature at the University of Pennsylvania has led expeditions to study the mummies. He believes these early settlers were Tocharians, a group of Indo-European herders who traveled east across the central Asian steppes.

A map shows the Tarim Basin in northwestern China. Image courtesy of the United States CIA.

Research into the mummies is ongoing. “There have been exciting new discoveries almost every year,” Professor Mair told me, “I went on expedition in 2011, and again in 2012, and I will be publishing my new findings this year and in the coming years.”

One thing that is currently known is that these European mummies are not the only examples of early settlers in the Tarim Basin.