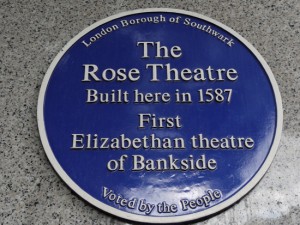 The Rose Theatre was the first theatre built on Bankside in 1587. Image copyright Paris Franz, all rights reserved.

The demolition of Southbridge House in 1988 was an unremarkable event, just one more episode in London’s endless cycle of destruction and reinvention.

Then archaeologists from the Museum of London moved in, and it soon became clear the site was far from ordinary. For here, in the shadow of Southwark Bridge, lay the remains of The Rose, the first theatre built on Bankside, on the south bank of the River Thames, in the year 1587.

Archaeologists had known it was there, but after a history of ongoing redevelopment and wartime bombs, they hadn’t expected to find much. The extent of the remains came as a pleasant surprise.

A hasty excavation in advance of the building of a new office block uncovered a 14-sided polygonal structure 22 metres in diameter. The remains of the Rose are the only complete set of theatrical foundations to survive from the Elizabethan era.

Finds recovered from the site of the Rose included coins, jewellery, fragments of banisters and of the moneyboxes used to collect entrance money. In addition, the archaeologists uncovered the chalk and stone foundations of the theatre, and the sloping mortar floor, which probably helped to drain a naturally wet site so close to the river. The position of the stage was clearly marked.

The discovery of the layout of a complete Elizabethan theatre came at a fortuitous time. Information gleaned from the archaeological dig at the Rose influenced the rebuilding of Shakespeare’s Globe just a few metres away.

The Campaign to Save The Rose

For a while, the site was in serious danger of disappearing beneath a car park. A vociferous campaign to save the site grabbed the headlines, supported by such luminaries of the theatrical world as Judi Dench, Ralph Fiennes and Patrick Stewart.

In his last recorded words, shortly before his death in 1989, Sir Laurence Olivier delivered the rallying cry of the campaign: “Cry God for Harry, England and The Rose!”

The campaign was partially successful, as the developers agreed to alter their plans slightly to ensure the foundations of the new office block did not damage the archaeology. The site now lies tucked into the chilly embrace of the basement at Rose Court.

A Walk on the Wild Side

In Elizabethan times, Bankside was the equivalent of the West End and Soho rolled into one. It was a place of ribald entertainment, outside of the jurisdiction of the city authorities, known for its bear-baiting rings, gaming dens and brothels. A disreputable novelty such as a playhouse would fit right in.

The Rose playhouse was the brainchild of entrepreneur and impresario Philip Henslowe and his partner John Cholmley, who built the Rose in 1587, and enlarged it in 1592. We know so much about the building and the everyday management of the theatre thanks to the survival of Henslowe’s Diary, or account book, from the year 1592, which recounts that he spent £105 to enlarge the theatre to the north and re-orient the stage. 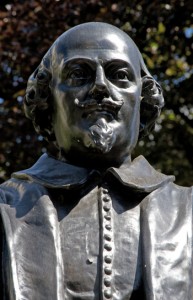 A number of Shakespeare’s plays premiered at the Rose. Image copyright Paris Franz, all rights reserved.

The Diary also tells us something of the Rose‘s repertory. Some of the plays first staged at the Rose include Christopher Marlowe’s Doctor Faustus and Tamburlaine the Great, Thomas Kyd’s Spanish Tragedy and William Shakespeare’s Henry VI Part I and Titus Andronicus.

Henslowe’s Diary survived partly through luck and partly through the influence of star actor Edward Alleyn, who married Henslowe’s step-daughter in 1592 and became an integral part of both the Rose and Henslowe’s theatrical business. After an illustrious career, Alleyn went on to found the College of God’s Gift, now known as Dulwich College, where his and Henslowe’s papers now reside.

Ultimately the Rose became a victim of its own success. Other theatres opened in the area in the 1590s – the Swan in 1595 and the Globe in 1599 – and the smaller Rose suffered in comparison. Henslowe let the lease lapse in 1605, after which it vanished from the map.

The Rose is now classified as a Scheduled Ancient Monument, monitored by English Heritage. There are open days scheduled every Saturday, and a busy schedule of monthly plays. Part theatre, part archaeological site, the Rose is an atmospheric place to see a play. The small stage overlooks the site, the original outline of the Rose picked out in small red lights in the gloom.

Many of the visiting companies have used the backdrop to great effect, performing to an audience of around 50 people. There is something fittingly Elizabethan about the experience, with audience and performers in such close proximity.

The Rose Theatre Trust administers the site, working to ensure the survival of the fragile archaeological remains ever since their discovery in 1989. The Trust also has ambitious plans for the future. Money permitting, it aims to fund a complete archaeological investigation of the whole site, preserving the remains under a glass floor. The ultimate aim is to reconstruct the Rose, within the limits of its location in the basement of Rose Court, as a multi-purpose educational, exhibition and performance space.

If all goes as planned, the newly revamped Rose will open in 2016; 400 years since Shakespeare’s and Henslowe’s deaths.