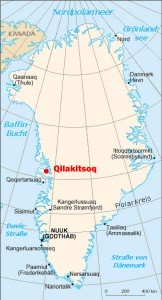 Archaeologists found the Qilakitsoq mummies in 1972. Image courtesy of the CIA World Factbook

The Qilakitsoq mummies are the oldest preserved remains in Greenland. They were found in 1972, close to the site of a small Inuit settlement on the western Nuussuaq peninsula, about 450 kilometers north of the Arctic Circle.

Archaeologists have been able to learn a great deal about the mummies’ lifestyles, state of health, even their relationship with each other. However, they have not been able to establish with any certainty how and why they all died.

Archaeologists have dated the mummies to around 1475 AD. The bodies were stacked on top of each other with layers of animal skin in between. The dry, freezing conditions resulted in natural mummification, as the overhanging rock protected the bodies, which archaeologists discovered in two graves, a metre apart. Dental analysis revealed the age of the mummies.

Analysis of the Mummies

Research was as non-destructive as possible. Although archaeologists took DNA extracts from hair and nails to establish interrelatedness and nutritional health, they did not undress or dissect the best preserved mummies in order to conserve them. However, archaeologists carried out more detailed analysis on the less well-preserved mummies.

Tattoos: Five of the women’s faces were tattooed, as was customary amongst adult Inuit women. The variations in the styles of these tattoos revealed interesting clues about the potential tribal origins of the women. All consisted of blue or black lines arching over the eyebrows and over the cheeks. Three of the women also had lines tattooed beneath their chins. The remaining two showed a stylistic difference: a dot was tattooed on their foreheads instead. These variations could indicate tribal markings, indicating that some of the women may have married into the group.

Health: All of the mummies were well-nourished in the period before death. A considerable amount of digested food remained in the intestines, whilst isotopic analysis of skin collagen indicates a diet of mainly marine products, with only 25% of nutrition derived from plants and animals, such as reindeer.

However, not all were in perfect health. The four year old was x-rayed and revealed to have a deformed pelvis and to be suffering from Calve Perthes disease, which was destroying one of his thigh bones, preventing him from walking. One of the older women had an imperfectly-healed collar bone, which may have limited the use of her left arm. She also had cancer of the back nasal passage which had spread, affecting her eyes and ears. Harris Lines on her bones showed that, whilst she was well fed before death, she had suffered from malnutrition early in her life.

Activities in Life: Wear and tear on the women’s bodies also revealed clues about their daily activities. Grooves found in the left thumbnail of one woman indicate that she used it to brace sinew while cutting it. The loss of lower front teeth of the older woman could also suggest that she had used her teeth as a vice to hold animal skins when cutting or working them. 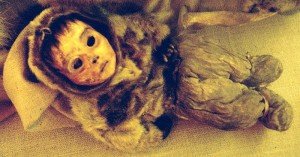 The mummified remains of the six month old baby. Photograph by Choffa.

The Relationship Between the Mummies

Mitochondrial DNA analysis has established that certain members of the group were related. In all, three maternal groups were identified. However, the burials do not correspond to these family groups.

How Did The Qilakitsoq Mummies Die?

The burials are intriguing, as it was not an Inuit custom to bury women and children separately from the men. The health problems of the older child and one of the older women may have caused their death. But what of the others?

Researchers have considered the possibility that the group burial occurred because all eight individuals died together. Drowning in a boating accident was one theory – but there was no evidence to support this. Indeed, analysis cannot determine if each group died at the same time.

However, even though full analysis has not been carried out on the mummy of the baby, it does seem that he may have been buried alive. Inuit custom dictated that a tribe might suffocate or bury a child alive if they could not find a woman to care for it after the death of its mother. Whatever the cause of the death for the others, it seems the child was sent to accompany its mother to her grave.

Our Heritage. Qilakitsoq – The Home of the Greenland Mummies. Accessed September 22, 2013.