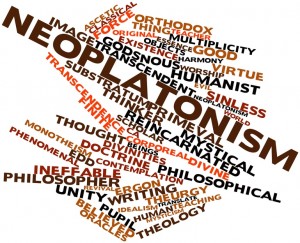 A word cloud for Neoplatonism offers many related thoughts. Image courtesy of intheskies.

Bertrand Russell described John Scotus Eriugena as the most astonishing person of the ninth century.

“An Irishman, a Neoplatonist, an accomplished Greek scholar, a Pelagian and a pantheist,” Eriugena marches through a century known for scholarship, standing intellectually head and shoulders above his contemporaries. Russell rates him highly for setting reason above faith and caring nothing for academic authority.

We  know that Eriugena was born in Ireland about 800 AD, but the place of his birth remains unknown. We know that he took the green martyrdom, the act of leaving Ireland for religious reasons, and went to the intellectually-vibrant court of Charles the Bald in France.

Eriugena died in 877 in England, tradition saying that his monks murdered him, although Russell suggests that this fate befell another John rather than Eriugena.

The Influence of Pseudo-Dionysius

Eriugena’s command of Greek led him to Pseudo-Dionysius, whose works he translated for European readers. One of St. Paul’s few converts at Athens was Dionysius the Areopagite, but beyond the Scriptural reference nothing is known of him. However, Christian tradition has it that he was a scholar, though no works from his pen remain.

In later years, a work purportedly from Dionysius came to Europe, but scholars are adamant that it is of later date and is therefore pseudonymous, hence the name Pseudo-Dionysius. This work is of mystical theology that describes the advance of the soul up the paths of mysticism, and is therefore a work describing the path of Christian prayer.

Significantly, Neoplatonism influenced Pseudo-Dionysius, a later, mystical  form of the philosophy of Plato, which understood creation as the unfolding of the divine from primal unity into plurality rather than as an act of making. For Eriugena, the unfolding of God into creation led to a kind of pantheism in which God was not seen as the maker of things, but as their substantial essence.

Pseudo-Dionysius’ contribution to Christian philosophy is the via negativa, the negative way, in which God is thought to be beyond description and even beyond all human thought categories. Thus if I say that God is intelligent, I am wrong, as intelligence as we understand it works in time, but if I am to say that He is not intelligent, I am also wrong, as that implies limitation.

In this view we can only say not what God is, but what he is not. It is even wrong to say that God is being, for being is a category describing created realities. Hence in Eriugena’s thought the unknown and unknowable deity, totally beyond being, proceeds from the inexpressible darkness to articulate himself into the world in the act of creation.

Neoplatonism had a trinity: God, nous and soul. God emanated nous, which means roughly the rational principle or mind, but nous gave rise to Spirit, which was the creative force. The world was created when spirit looked away from nous, making the world unfold from itself.

What distinguished Eriugena from Neoplatonists was that while he believed that God was unknowable in Himself, he believed that integral to the divine creative act was his self-expression in Christ, who performed the function of nous in Eriugena’s thought. Christ is the Logos, the word emanated from God with the primal causes of all things.

A further point of unity is that both Neoplatonism and Eriugena’s system of thought believe that all must return to unity with the One, a process which mystical prayer affects and is perfected in heaven.

This Irish note uses the only picture of Eriugena to celebrate one of Ireland’s great thinkers. Image by Antonio Bagnoli.

On the Division of Nature

Eriugena spoke about Natura, the one reality that includes God and nature, and it seems that he did not understand creation sequentially, as God first and then nature, but saw them as part of the same reality, though God was the dominant part of the totality. This is not orthodox Christian thought and comes closer to Eastern mysticism.

One who thought that faith and reason should work together, but that reason should have priority and who disregarded all forms of religious authority in intellectual matters is unlikely achieve sainthood, as Eriugena makes churchmen uncomfortable. Furthermore, while he was useful to the  religious authorities of his time, he was intellectually ahead of them and, like most such thinkers, remained unappreciated. Whether Eriugena’s works will ever enter the mainstream of  Theology is yet to be seen.