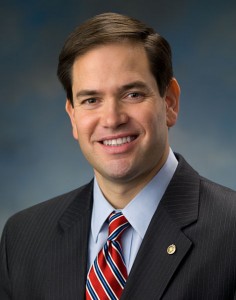 During the presidential election of 2012, Republican candidate Mitt Romney repeatedly said that he opposed any immigration reform that was akin to amnesty. In an endeavor to increase the Hispanic vote within the party, however, some Republicans like Florida Senator Marco Rubio are crafting a “path to citizenship” that threatens to split Republicans. Conservative columnist Ann Coulter began her June 12, 2012 editorial for Human Events with the statement, “If the GOP Is this stupid, it deserves to die.”

Other recent legislation threatened to divide Republicans. The Affordable Health Care Act, often referred to as Obamacare, resulted in the expansion of the Tea Party Movement, targeting legislators who were deemed too moderate, labeling them “Republicans in name only” or Rinos. Similarly, budget and deficit debates have tested Republican leadership and resolve.

There have been other times in American history when national legislation so enraged and divided its citizens that old political alliances were shattered and new political alignments produced new parties. Before 1854 the two dominant parties were the Whigs and the Democrats. After the 1854 passage of the Kansas-Nebraska Act, however, the new Republican Party was founded, in large part due to the effects of the legislation. Disenchanted “Anti-Nebraska Democrats,” Northern Whigs, and Free Soilers joined its ranks. 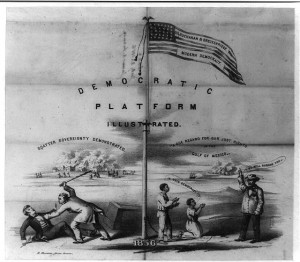 The cause of this massive upheaval in American politics was one man: Illinois Senator Stephen A. Douglas. Douglas wanted to organize the Kansas-Nebraska territory on the basis of popular sovereignty. The fertile lands, however, were above the Missouri Compromise line established in 1820. Although this line extended to the westernmost limits of the old Louisiana Purchase, it did not apply to the 1848 Mexican Cession.

At the same time, Douglas advocated a transcontinental railroad with a terminus at Omaha with branch lines to Chicago and St. Louis. Douglas’ extensive property holdings in Chicago would have benefited from such railroad connections. Southerners, however, wanted the railroad to take a southern route, from New Orleans to California. Their champion was the Secretary of War, Jefferson Davis.

Douglas realized that opening Kansas-Nebraska on the basis of popular sovereignty was not enough to gain Southern support for the central route of the proposed railroad. Goaded by Southern senators, Douglas allowed an amendment to the bill that would repeal the 1820 Missouri Compromise. 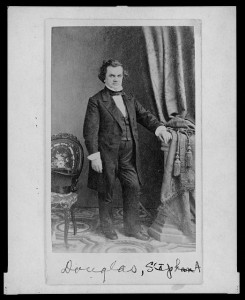 Stephen Douglas’ 1854 Kansas-Nebraska Act included the repeal of the 1820 Missouri Compromise, an action that helped the founding of the Republican Party and destroyed existing parties. Library of Congress Photograph from 1860.

The Dixon Amendment, named for Senator Archibald Dixon of Kentucky, infuriated the North. There would be no more geographic restrictions on the slave institution.  In his speech to the House of Representatives, Tennessee congressman William Cullom referred to Douglas’ bill as one, “…to make great men out of small ones and to sacrifice the public peace and prosperity upon the altar of political ambition.”

The Congressional vote on the Kansas-Nebraska Act demonstrated newly forming political allegiances. Harvard historian Frederick Merk writes that, “It foreshadowed the Republican vote in the presidential election of 1860” (History of the Westward Movement, 1978). In 1850, the Whigs and the Democrats dominated a two-party system that was occasionally offset by short-lived third parties championing one issue.

By 1860, however, the Republicans faced the new Constitutional Union Party and a split in the Democrats between Stephen Douglas and John C. Breckinridge. The only other party of some significance, the Know-Nothings or “American” party, also gaining strength from the 1854 Kansas-Nebraska debacle, was absorbed by the Republicans and the Constitutional Unionists in 1860.

The Kansas-Nebraska Act brought Abraham Lincoln back into politics but it also ended Stephen Douglas’ climb to the presidency. In 1856 the Democrats nominated James Buchanan, in part because he was untainted by Kansas-Nebraska and the subsequent violence in the territory. Buchanan’s sympathy was toward the South and he disliked and distrusted Douglas. During the 1860 Democratic convention in Charleston, South Carolina, Buchanan, working from the nation’s capital, used his influence to deny Douglas the nomination.

It is remarkable that legislation could affect the nation to such a degree but this was the decade preceding the Civil War and sectionalism was at its height. The Fugitive Slave Act, part of Henry Clay’s 1850 Compromise, helped unify the North against Southern slavery. The Kansas-Nebraska Act divided established political parties.

The current Republican Party has experienced recent shifts between so-called moderates and “Tea Party” conservatives. Some Republicans yearn for the “party of Reagan” and even point nostalgically to the “party of Teddy Roosevelt.” The immigration issue, however, has the potential to deeply divide the party much as the 1854 Kansas-Nebraska Act fractured the Democrats and Whigs. Although the issues are different, political polarization as an effect might not be.

Speech of the Hon. Wm Cullom of Tennessee on the Nebraska and Kansas Bill in the House of Representatives. April 11, 1854. Washington: Congressional Globe Office.