LT M. E. Clifton James’ uncanny resemblance to Bernard Montgomery led to his role as the general’s double in the weeks before the Normandy invasion. Image source: publicity shot.

It was the role of a lifetime: portraying one of history’s most famous generals – Field Marshal Bernard “Monty” Montgomery – on a stage that spanned two continents. The casting, however, had one small drawback. A bad review could cost thousands of lives. A good one could cost your own.

It was a part that Lieutenant M. E. Clifton James couldn’t refuse. A little-known, middle-aged Australian actor before the war, James had joined the army in 1939, serving as a pay officer. His only remarkable service in the war up to that time was to save a foundering war rally with a hilarious, impromptu impersonation of Monty, to whom he bore a great resemblance.

The success of the skit would have repercussions.

As the date for D-Day, the invasion of Normandy, approached, the Allies launched Operation Bodyguard, an intelligence operation designed to keep the Nazis from discovering the location of the coming assault on Fortress Europa.

One of the problems the Allies faced was the appointment of Montgomery as ground commander for the invasion. British intelligence knew German spies would be watching the colorful, publicity-seeking general’s every move, hoping to determine the location of the coming invasion. How could they keep Monty out of sight of Nazi agents?

Dudley Clarke, an operative with the London Controlling Section responsible for Operation Bodyguard, found the answer while watching the movie Five Graves to Cairo, which featured an actor playing Montgomery. Why not use an actor to impersonate Monty and make the Germans believe Operation Overlord, the Normandy invasion, would occur in another part of France?

An Audition Call to Duty

The actor in the movie was too tall for the part. After a desperate search, Clarke stumbled on James.

James probably couldn’t believe it when he received the call. David Niven, the famous screen star and now a lieutenant colonel in the British Army, was inviting him to London for a film test. When he arrived for the test, however, Niven quickly passed James off to a Colonel Lester of MI5, British military intelligence. James remembers Lester’s explanation:

“I’m afraid I’ve got rather a shock for you,” Lester said. “You’ve been chosen to act as a double for General Montgomery.” 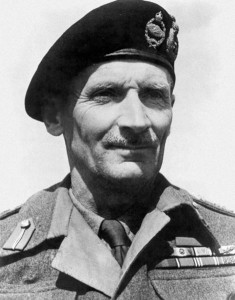 This is the real Field Marshal Bernard “Monty” Montgomery. Once named overall ground commander for the Normandy invasion, he was dogged by German spies trying to determine where the assault would take place. Image courtesy of the Maxwell AFB website.

Though James was a spitting image of the famed general, he wasn’t the perfect fit for the role. The actor was a heavy smoker and drinker; Montgomery abhorred both vices. James had also lost his right middle finger in WWI; a prosthetic finger was fashioned to hide the injury.

James was attached to Montgomery’s staff as a correspondent, a role that gave him the chance to study Monty’s speech and mannerisms in detail. in his post-war memoir, I Was Monty’s Double, James says he soon felt confident he could mimic Monty’s “rather high pitched voice and the way he chose words,” but feared he wouldn’t be able to “imitate (Monty’s) unique personality, to radiate (his) strength and confidence.”

Montgomery: “Do You Feel Confident?”

In a private meeting, Montgomery emphasized the importance of James’ mission. “You have a great responsibility,” James remembers the general saying. “Do you feel confident?”

But James didn’t feel confidant. On May 26, 1944, dressed as Monty, James publicly boarded an airplane for Gibraltar. On board, he sneaked sips from a hidden flask to soothe his nervousness. His handlers spent the rest of the flight sobering him up for his debut.

Landing on Gibraltar two days later, James was greeted by Governor General Ralph Eastwood, an old friend of Montgomery who had been briefed on the deception. The two greeted each other as old friends, then attended a dinner reception at Government House. There, playing his part, James dropped mysterious references to Plan 303, a fictitious invasion of Southern France.

The next day, James was flown to Algiers where, still acting as Montgomery, he met with the senior commander of Allied forces and presided over a review of the troops. Afterward, the actor was whisked away to Cairo, where he was hidden in a safe house until June 6, when the invasion of Normandy began. 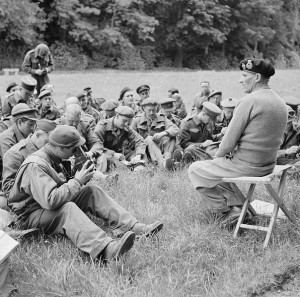 While James impersonated Montgomery in the Mediterranean, the real General Montgomery carried on in his role as ground commander for the D-Day invasion of Normandy. Here, he addresses war correspondents. Image by Morris (Sgt), No 5 Army Film & Photographic Unit.

After the war, James wrote I Was Monty’s Double, which was later made into a movie in which James played both himself and Montgomery. When James died in 1963, Montgomery told the Daily Mail newspaper: “He fooled the Germans at a critical time of the war.”

How well James fooled the Germans was not revealed until 2010, when the British government released previously classified documents. According to those papers, a Spanish diplomat, Ignacio Molina Perez, had been invited to meet with the colonial secretary at the same time James’ “Monty” was leaving Government House for Algiers.

Molina, though Spanish, was a known German spy. His presence at Government House was arranged so he would accidentally see James’ Montgomery leaving for the airfield. Molina questioned the secretary on Monty’s visit. The secretary, part of the hoax, confided that Monty was en route to North Africa.

Tailed by British agents after leaving the colonial secretary, Molina was seen making an urgent trunk call to his superiors in Madrid. British cryptographers later decoded messages to Nazi headquarters. “The material,” the declassified papers said, referring to the phony general’s visit, “reached Berlin in 20 minutes.”