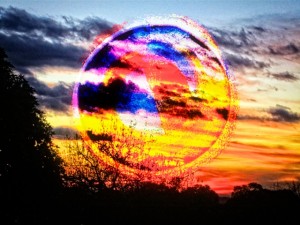 Immortality – Is it a Reality or Just a Dream? Image copyright Douglas Cameron, all rights reserved (used with permission).

When we consider their long and problematic history, can science and religion ever become truly compatible?

Dr. John Martin Fischer, a philosopher from the University of California, was, around a year ago, awarded funding to pursue a three-year project examining everything that may indicate, even prove, an afterlife.

The project aims to draw on the expertise not only of philosophers, but also scientists and theologians.

Funding from the John Templeton Organisation

This Christian organisation is funding the project with $5m worth of research. Areas being investigated include near-death experience and other apparently “supernatural” occurrences, and how science itself seeks to extend life expectancy.

Besides looking at the actual physics of this big question, according to the original news report by Sue Roberts and Tim Wilkinson in Philosophy Now, the project is also assessing “…the coherence of various religious views of immortality.” These are questions that have dogged the human race from its earliest beginnings.

Here are the main questions the researchers are addressing, as displayed on the organisation’s website:

•whether and to what extent persons’ beliefs about immortality influence their behavior, attitudes, and character

•whether it is in some sense irrational to desire immortality

Dr. Fischer, who is running the project, writes extensively on free will and determinism. The Philosophy Now news report claims he is sceptical about the idea of an afterlife, but thinks it would be a good thing.

Could We Survive Bodily Death through Cell Regeneration?

Is it possible for humans to achieve immortality? Well, there are creatures that can actually regenerate, for example, starfish can repair and grow new arms when they are injured. Other creatures can actually regenerate their entire body cells, so that, essentially, they are immortal. There is also a little creature called a hydra, that looks like a tiny tube with tentacles, and whose cells manage to replicate indefinitely. In addition, the project plans to study certain worms that reproduce asexually.

Decoded Past asked Dr. Mitchell-Yellin if anyone on the project would be looking into the potential for immortality among other creatures. “I do know that we are funding one project, looking at a particular species of hydra that can regenerate itself,” he explains. “This project is specifically interested in isolating parts of the genome of this species of hydra that are responsible for this special ability, with an eye to how this creatures’ genes may be relevant to humans.”

Dr. Mitchell-Yellin was not able to specify whether this research was likely to harness their genes to prolong our own lifespans, although he acknowledges that might be something the scientists “are looking into.”

Is Cryonics an Option?

Firstly, a clear definition between cryogenics and cryonics, two terms of reference which are frequently confused. Cryogenics is the science of extremely low temperatures. Cryonics is the preservation of the human body, or living entity, by freezing in anticipation of eventual resuscitation.

Is it possible we can be frozen in order to be revived at some time in the future? This might allow people to take advantage of new technologies in order to extend their lifespan indefinitely. Cryonics has a longer history than most of us might imagine.

James Lovelock, born in 1919, is known for his work in cryonics. Lovelock is an environmental scientist and the originator of the Gaia theory, which claims that all organisms are connected with each other, and interact with their inorganic environment. Thus, according to Lovelock, Earth becomes a self-regulating system, producing the essential conditions for life.

During the 1950s, a key event in the history of cryonics occurred when James Lovelock began freezing of sperm for artificial insemination. Later, during the 1970s, the Sperm Bank came into being.

However, Dr. Mitchell-Yellin of The Immortality Project is doubtful that human beings could actually be resuscitated in such a way that they would be the same person in the future as they are now. He says, “This seems to me to be an open question. We don’t know for sure what the precise connection is between brain structure and brain function, or between brain function and conscious experience, including memory.”

He also points out that we don’t know much about the connection between the environment and the mind. “It seems to me that there is too much that we don’t know to be confident that freezing oneself now would allow one to be alive in the future.”

American theoretical physicist, Michio Kaku, also has something to say about the subject. He points out that when the human body is frozen there is disruption and tearing of the cells. Accounts of other creatures surviving freezing cannot be applied to humans. He says: “Fish do it, right? Don’t they simply get frozen solid in the wintertime? Frogs? Aren’t they being able to thaw themselves out when it’s springtime from a block of ice? And the answer is yes, but they do it with anti-freeze, that is glucose.”

So, as far as both these experts are concerned, resuscitating people through cryonics may be possible in the future, but at the present time, it is highly unlikely to be successful.

Could gravestones be a thing of the past one day? Image copyright Janet Cameron, all rights reserved.

Dr. John Martin Fischer and Dr. Benjamin Mitchell-Yellin are jointly working on a book about the significance of near-death experiences. There is already a body of research that have resulted in a number of best-selling titles.

There has been some scepticism during the recent past, among some scientists, to the idea of an afterlife. Kevin Nelson’s book, The Spiritual Doorway, claims that what happens to the brain at the time of death is more likely to be physiological than supernatural. Hallucinations and lights at the end of tunnels could be merely as a result of chemical changes as the brain cells shut down at the point of death.

However, the two doctors intend to update the subject with the latest theories and results gleaned from the project. They are delighted with the response from the public. “That kind of engagement is important because it allows for a broader dialogue,” says Dr. Mitchell-Yellin. “As an academic, one does not usually expect to strike a chord with the public in such a deep way with one’s work.”

1. That a person will live forever, regardless of accidents or attacks.

2. That a person will live and not age, but be vulnerable to death by accident or attack. They may live forever if they are able to avoid these eventualities.

The actual concept of immortality held by the individual may make a difference to behavioural issues. Christianity promises that those who believe and lead a Christian life will live forever, in heaven, with God. It’s not difficult to see how this belief might affect human behaviour. Dr. Fischer sums it up in Austin Considine’s article How Humans Will Respond to Immortality, by saying that Christianity is about both free will and immortality.

Dr. Fischer says he is actually a non-believer, but this does not preclude his own belief in the potential of immortal life, which he thinks would be a good thing.

Is it Irrational to Desire Immortality?

The ethics philosopher, Mary Midgley has said, categorically, that it is irrational to want to be immortal. Her main objections, according to her article, “Death and the Human Animal,” are:

Dr. Mitchell-Yellin also acknowledges that important issues arise with any radical change in our longevity. He cites, for example, interpersonal relationships and social institutions. “For example, how would marriage work in the case of immortal individuals? When in their lives would people have children, if they had them at all? How would schooling be structured? What about retirement? I think it is hard to tell, from our current, mortal perspective, how things would go if we were to become immortal.”

Dr. Mitchell-Yellin admits that he is not sure about the desirability of immortality. At this stage, he is not even sure how we can address these issues. He says, “If we couldn’t lead a recognizably human life, then perhaps we shouldn’t think immortality would be a benefit. But is it true that an immortal life would be not recognizably human? I’m not persuaded either way.

“But I think these are important issues to think about given our current situation.”

Considine, Austin. How Humans Will Respond to Immortality. Motherboard. Accessed on March 13, 2014