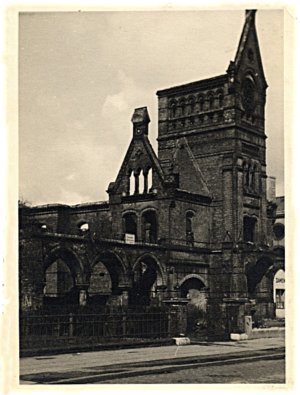 This picture was taken in Hamburg after the 1943 bombing. As this ruined church shows, the destruction spared nothing. The lessons of war must include the message of peace as part of the rebuilding. Image by Karl Piehl.

The Lessons of Life and Death still Apply

Ingrid told her story at schools and in one prominent church. Those who suffer the most in wars are the innocent: women, children, and old people. She credited CARE packages with saving the life of her family after the war, but always viewed mass bombings of civilian centers as murder. Just as she tensed and held her breath when an airplane flew low over the house, she also empathized with innocent casualties in the seemingly unending wars brought into the living room every night by the television.

Ingrid died September 2, 2012 at the age of eighty-one, still working three days a week in a country she adopted as her own when she migrated to the United States in 1953. It was the one nation, she hoped, that would find a solution to war and end the senseless slaughter of people we today refer to as “collateral damage.”