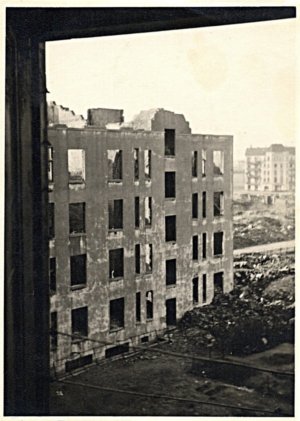 In 1943 tens of thousands died during the bombing of Hamburg. Many of the survivors lost everything except what they could fit into a single suitcase. Image by Karl Piehl.

In the summer of 1943, German soldiers guarding the approaches along the English Channel on the Dutch coast observed massive formations of Allied bombers flying northeast toward Hamburg. Frantically, some of the soldiers attempted to contact family members and friends. In Hamburg, a thirteen year old girl heard the first air raid sirens and ran to a shelter with her mother. Sixty-five years later, Ingrid Streich recounted her experiences and the long-term effects of surviving one of the worst bombings of World War II.

Once air raids became more common, many children went to the countryside or to live with relatives out of harm’s way. Ingrid had just returned from a year in Poland. Her father, wounded at Stalingrad, was recuperating in a military hospital in southern Germany, but Ingrid missed her mother and wanted to come home.

“As soon as the sirens would start,” she wrote, “we had to stop everything or jump out of bed and get dressed in a hurry and grab the air raid bag which had our most important papers, jewelry, and perhaps some of the silver flatware in it.” Every family kept such a bag beside the door, often agonizing over what should be taken. Bomb shelters only permitted one bag per family and no pets.

During earlier raids, Ingrid contracted scarlet fever and wasn’t allowed in a shelter: “…my sweet mother would take care of me, read my favorite fairy tales, and sit in the darkness, holding my hand, shaking until the end of the air raid.”

By mid-1943 rumors spread through the city that the Allies were preparing a strike to obliterate the city within a ten day bombing period. Neighbors with wagons loaded precious possessions and left the city. “My mother at that time started to rearrange our suitcase again and I remember her sweet face which was so sad.” 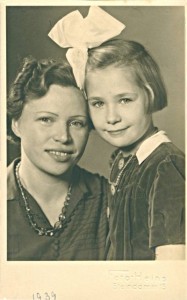 Ingrid and Maria, her mother, posed for a picture in 1939 when the war began. Before it was over, they had lost their home and had to leave Hamburg, escaping only with their lives. Image by Heins.

When the bombing – named Operation Gomorrah by the Allied commanders – began, Ingrid and her mother hurried from their third floor apartment to a bunker at a park across the street. It was filled with women and children barely able to keep their composure. “The bunker was shaking from the countless bombs raining down. Nobody knew what was going on outside and hoped and prayed nothing would hit the bunker.”

The Allies used phosphor bombs, spraying the vicious chemical on people and property. Thick smoke hung over the city. After days of relentless bombing, Ingrid knew their turn had come. The city was being destroyed district by district. “I remember putting all my dolls in their beds and covered them with blankets so they would not see when the flames would come and burn them. We closed the door to our apartment for the last time.”

During this final raid, they sheltered in a different bunker under the subway station. Much later they learned that everyone in their normal bunker had been killed. When the raid ended, city officials told the survivors they could not go back home. Everything had been destroyed. “Our whole area was in flames and nobody was able to go home anymore…We put on sunglasses and a wet cloth in front of our mouth and nose because the smoke was thick and dangerous.”

The heat of the exceptionally hot summer, added to the burning buildings, created a firestorm that raced through many streets of the city. Burning people jumped into the city’s canals but the water could not wash away the chemical used in the bombs. Some stood for days in the water until their strength gave out and they drowned or were mercifully shot by civil defense authorities.

Escape from the Firestorm

Ingrid and her mother managed to find a train traveling north toward Denmark, and stopped at Schleswig to live with Aunt Paula, her mother’s oldest sister. “She took us in her arms because she was not sure how we could have made it out of Hamburg.”

The dark red horizon in the direction of Hamburg could be seen as far as the Danish border. “We were exhausted, totally black from all the smoke, but alive, and I knew then that God was with us and protected us all this time.”

On the third day, Ingrid emptied her coat pockets and found her favorite little doll, which she kept the rest of her life. Although she experienced other calamities such as the bombing of Wiesbaden and the terrible hunger during the unusually cold winter following the war, the bombing of Hamburg shaped her entire life.

Click to Read Page Three: The Lessons of Life and Death still Apply