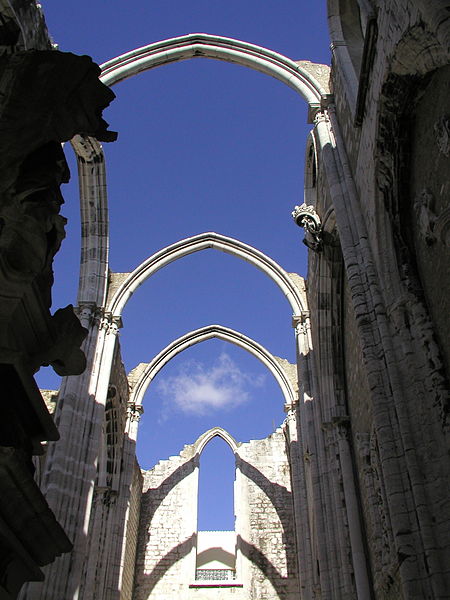 The Convento do Carmo was destroyed by the 1755 Lisbon earthquake. Lisbon’s reconstruction was the beginning of earthquake engineering. Image by Chris Adams. CC BY-SA 3.0.

Lisbon was at prayer. It was the Feast of All Saints, November 1, 1755 and the godly were packed into the city’s hundreds of opulent churches. No doubt many of them had a sense of security, a sense that they’d placed themselves under the protection of a supreme being and that no harm could come to them. They could not have been more wrong.

The facts are bare, bleak and shorn of emotion. At around ten o’clock, somewhere out in the Atlantic Ocean, an enormous earthquake of a magnitude probably between M8.6-M8.8 broke the earth’s crust deep under water. Very soon after, the buildings of Lisbon began to shake. Most of them – including the packed, stone-built churches – crashed to the ground. Fires broke out. Then came a tsunami, which took its toll among those who had fled to the waterfront in the hope of escape.

The actual death toll is debatable but the scale of the disaster was unprecedented in Europe. David Chester describes it as “the largest documented seismic event to have struck Europe” and places the estimated number of deaths at up to 100,000, not just in Lisbon itself but across a wide area. Even if the toll was lower, there’s no question that the impact of such a tremor was significant.

After the Earthquake, the Questions

The loss of life was bad enough, but for many of those who survived, and for many who did not feel the impact of the disaster first hand, but heard of it at a distance, the result was loss of faith. If, as was widely believed, earthquakes were sent by God to punish the wicked (think of the destruction of Sodom and Gomorrah) then why did so many devout people die, on a holy day, in church?

The broader timing of the earthquake was also crucial. In Terra: Tales of the Earth (2009), Richard Hamblyn points out that it occurred in the middle of the Enlightenment, when such questions were already being raised as a result of lesser disasters. Lisbon led many more to question the omnipotence of God. Voltaire gave the event a place not only in poetry but also in his classic satire on optimism, Candide.

This illustration of the dreadful aftermath of the Lisbon Earthquake is by Daniel Chodowiecki (1909).

The questions after Lisbon, however, were not confined to philosophers. Scientists, freed to an extent from the straitjacket of a wide social belief that all was the work of God (and therefore did not require human explanation) began to consider not just what had occurred but why; and they began, for the first time, to move towards a plausible explanation of how such earth movements occur. The aftermath of Lisbon found a highly practical expression, with the first attempts to create a new city that would stand up to future events.

The trauma of Lisbon’s 1755 earthquake had dramatic implications. This engraving, titled The Ruins of Lisbon depicts looters and other criminals being hanged. Image courtesy of the National Information Service for Earthquake Engineering (NISEE).

Throughout human history, natural disasters, whether predicted or not, have inspired people to ask questions, and caused great shifts in popular thinking. Most recently, the exceptional strength of Superstorm Sandy in late October 2012, along with the fact that it struck the heart of New York City so strong and hard, has provided much food for thought.

It’s too soon to be clear about what impact Sandy may have had upon society. However, in her 2013 editorial for Weather, Climate and Society, “The Lisbon Earthquake of 1755 and Superstorm Sandy: The Need to Understand Long-Term Impacts,” Roberta Balstad argues that there’s evidence that “there is now more widespread concern in the United States about the consequences of climate change than there was prior to 29 October 2012.” It will surely have added fuel to the discussion about whether global warming will lead to increased catastrophic weather events as well.

Balstad notes that “the Lisbon earthquake had very long-term intellectual, philosophical and even theological consequences for Europe and, by extension, North America.” But it had scientific consequences too, leading us towards a greater understanding (if no closer to prediction) of earthquakes – and to the beginnings of earthquake engineering and mitigation.

Balstad, R. The Lisbon Earthquake of 1755 and Superstorm Sandy: The Need to Understand Long-Term Impacts. (Jan, 2013). Weather, Climate and Society.