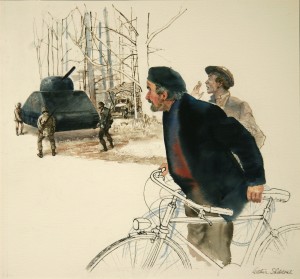 When two Frenchmen stumbled on four GIs of the 23rd Headquarters Special Troops carrying a replica tank, artist-soldier Arthur Shilstone told them, “The Americans are very strong.” Shilstone recreated the incident in this painting. Courtesy of Arthur Shilstone

By 1944 the Germans knew an Allied invasion of Northern Europe was coming. They had just two questions: when would it come, and where? The role of Operation Fortitude was to prevent the Nazis from discovering the answers to those questions.

The most likely places for the assault were Norway, France’s Pas de Calais, and the wide expanse of the French Normandy coast. To the Germans, the Pas de Calais was the obvious choice. Just twenty-one miles across the Straits of Dover, it was the closest French shore to  Britain. It was also close to the Belgium port of Antwerp, which the Allies would need to provide the invasion force with weapons, ammunition, and food.

The Allies, however, chose Normandy.  It was the job of the Fortitude hoaxers to keep the Germans thinking the Allied target was Norway or the Pas de Calais. Two Fortitude operations – Fortitude North and Fortitude South – used an elaborate system of spies, double agents, and information leaks to keep the Abwehr, the German spy organization, thinking the invasion would come to the north.

One of the problems facing Fortitude’s planners was how to keep the Nazis believing the target was the Pas de Calais when the assault forces began congregating in England’s southern ports across from the Normandy coast. The answer was the First U.S. Army Group (FUSAG), the largest army that never existed.

The crux of Quicksilver, however, was Gen. George Patton, who, after being relieved of his command in Sicily, was publicly named FUSAG commander. Since the Germans considered Patton the Allies’ best combat commander, his appointment to FUSAG cemented their belief that the invasion would come at Pas de Calais.

Fortitude South was so successful that the German command continued to believe well into July that the Normandy invasion was feint and that the real assault would come at Pas de Calais. It wouldn’t be the last time the Nazis were fooled by a ghost army. 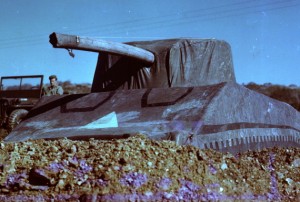 In 1941, the U.S. Army began recruiting soldiers for a special unit to fight the war not with weapons, but with deception. The 1,100-man 23rd Headquarters Special Troops was comprised of artists and illustrators, Hollywood set designers and radio sound technicians. Many would become famous in their fields after the war. Among them were fashion designer Bill Blass, artists Ellsworth Kelly and Olin Dows, and Hollywood set designer George Diestel. The one thing they all had in common was an eye – or ear – for detail.

The tactical mission of the 23rd HQ was to mask Allied troop movements with a mobile ghost army, not unlike Patton’s FUSAG. But the 23rd HQ took the deception techniques used in Fortitude South to new heights.

Full-size inflatable rubber replicas of M4 Sherman tanks, armored half-track personnel carriers, and howitzers were developed. Deflated, the counterfeits could be easily transported by truck and quickly inflated to their full size using air compressors. The replicas were then inexpertly covered with camouflage nets so they would be detected by German air reconnaissance.

The presence of tanks without telltale tracks carved into the soil would have been a dead give-away that the 23rd HQ’s force was fake, so real tanks and half-tracks were used to tear up the local countryside.

Sound is an important way of detecting enemy movements, and all armies send out patrols or establish listening posts  to listen for the sounds of tanks, trucks and marching troops.  Producing those noises was the role of the ghost army’s 3132nd Signal Service Company. The 3132nd was comprised of sound engineers who spent months recording the noise of various types of mechanized military movements. 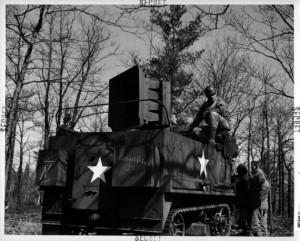 Massive speakers mounted on half-tracks blasted the sounds at night, simulating the movement of armored units or infantry: engines roaring, gears gnashing, voices yelling orders. While the sound trucks performed, the camouflage experts placed their inflatable vehicles among the trees. In the morning, German planes or spies would find the woods crowded with tanks or artillery, all realistic fakes.

The 23rd’s radio operators filled the airwaves with scripted transmissions which, when intercepted by German operators, sounded like broadcasts from dozens of units.

Members of the 23rd HQ reinforced their charade by visiting local towns wearing shoulder patches of both real and nonexistent army units. Occasionally, a “drunk” soldier with loose lips would drop a “secret” or two for the benefit of German spies and collaborators.

Shortly after the Normandy beachhead was secured, the 23rd Headquarters Special Troops began shipping out for France. By August, the entire unit was ready to launch its first major mission—to support Lieutenant General Troy Middleton’s VIII Corps in its march on the port city of Brest.

Using their bag of tricks, the 23rd managed to keep many of the German defenders pinned down while the bulk of the VIII Corps attacked another part of the city. After the war, the German commander. General Herman von Ramcke, admitted he had been completely duped by the phony army.

The Ghost Army took part in dozens of operations throughout the Northern European Theater. Its finale came in March 1945 when it convinced the Germans that a crossing of the Rhine River would take place near Viersen, Germany. When the actual crossing occurred in another location, the Nazis were caught completely by surprise. Many American lives were saved, for which the 23rd received a unit commendation.

The 23rd Headquarters Special Troops was disbanded in September 1945. It’s operations remained largely classified until the Smithsonian Magazine published an article on the Ghost Army’s feats in 1985. In May 2013, the PBS documentary, “The Ghost Army,” directed by Rick Beyer, was aired nationwide.