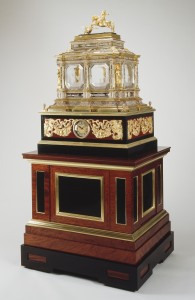 The First Georgians Art & Monarchy 1714-1760 at The Queen’s Gallery, Buckingham Palace, marks the 300th anniversary of the accession of George I (Georg Ludwig, Elector of Hanover) to the British throne.

Through more than three hundred works from the Royal Collection, the display explores every aspect of the reigns of George I and his son, George II. We learn about Georgian tastes as Britain emerges as one of the world’s most liberal and cosmopolitan states with a wealthy leisure class who spared no expense on luxury items in their homes.

The First Georgians Art & Monarchy offers a glimpse into the public and private lives of the early Georgians, their passion for fashion and the very grand designs they enjoyed.

Barrel-Organ Clock: The Temple and Oracle of Apollo

One of the most unusual items on show is a clock dating from about 1740. At first glance it looks like just a clock mounted on a mahogany case, but within the case is a concealed barrel organ.

Assembled by Charles Clay, Clockmaker to His Majesty’s Board of Works, this very complicated item comprises a gilt-bronze statuette from the early 17th century, a magnificent casket dating from 1664, and a clock, organ and mahogany case from about 1740.

The casket has forty panels of rock-crystal with landscapes and seascapes; every inch of the casket bears intricately detailed enamelled and silver-gilt floral trails and bronze figures of Greek Goddesses.

The casket sits on an ebony base housing the clock, which in turn sits on a mahogany and ebony panelled case. A barrel organ, concealed in the case, plays ten tunes. George Frideric Handel composed eight of them.

George IV later gave instructions for the addition of the bronze group of St George and the Dragon, attributed to Francesco Fanelli (1590-1653). George IV had the casket gilded, and added eight gilt bronze mask and scroll plaques on the central section housing the clock. Queen Victoria placed the Bible of the great hero General Gordon inside the casket after his murder at Khartoum in 1885. 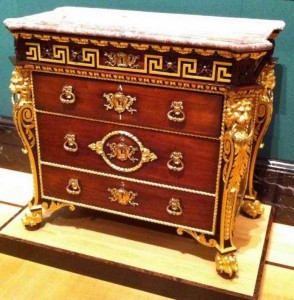 Attributed to Benjamin Goodison (c.1700-1767) – A pair of Chests. Image taken by Frances Spiegel with permission from The Queen’s Gallery. All rights reserved.

This mahogany chest, typical of 18th-century furniture, is one of a pair. Mahogany, popular with the Georgians, came from the West Indies in increasing amounts to satisfy their taste for luxury furniture.

The chest is partly gilded with gilt bronze mounts and a marble top added later. The frieze drawer bears a Greek key motif, and four truss uprights have lion’s heads.

On the three drawers we see an ivory-inlaid letters ‘A.’ The matching chest has the letter ‘B.’ On each draw we see the numbers ‘1,’ ‘2’ and ‘3.’ Handles on the side of the chest bear the arms of a later purchaser, John Bacon Sawrey Morritt. 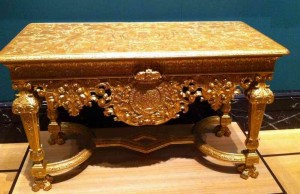 Made by royal cabinet-maker James Moore (c.1670-1726), this gilded and gessoed oak and pine pier table, went to George I in about 1723, probably for the Drawing Room at Kensington Palace. Pier tables like this usually stood between windows, below a mirror, with a tall candle-stand on each side.

Decorated with intricately carved gesso, the table bears the cipher ‘GR’ (Georgius Rex) for the King, encircled by the Garter and motto of the Order, with a crown above. On the front we see a central cartouche repeating the King’s cipher, surrounded by laurel and surmounted by a crown.

Decorative panels on each side show a rose and thistle motif. The legs are square in section and taper, with a bulbous head, similar to classical columns, a very popular element in 18th-century furniture. An ornately decorated stretcher brace the legs just above the feet.

Unusually for furniture makers at the time, James Moore incised his name onto the strapwork. He gilded the entire table, perhaps to imitate 17th-century silver furniture. 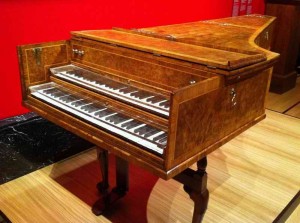 The instrument, originally a claviorgan: part-harpsichord, part-chamber organ, dates from 1740. The only element that survives today is the harpsichord. The burr walnut case has satinwood cross-banding. There is no veneer on the long side. The instrument has a two-tier keyboard, each with 36 keys.

Hinged in two sections, the instrument rests on cabriole legs with castors. There is a single foot pedal.  This harpsichord, one of the earliest of Shudi’s instruments to survive bears the name ″Burkat Shudi fecit Londini.″ 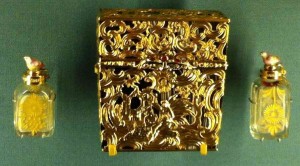 The First Georgians and Their Trinkets

The First Georgian’s passion for fashion included little things, pretty trinkets such as snuff boxes and scent bottles. This scent bottle holder, by an unknown maker, dates from about 1750. Made from gold, diamonds, emeralds and rubies, the container holds two tiny scent bottles.

Items like this were usually bought in English toy shops of the period and were essential elements of fashionable dress.

The First Georgians at The Queen’s Gallery, Buckingham Palace

The First Georgians Art & Monarchy 1714-1760 provides a fascinating insight into the lives of the early Georgians and their passion for fashion. The exhibit will be open until 12th October 2014 at The Queen’s Gallery, Buckingham Palace.

Sorry. No data so far.