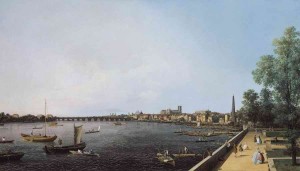 The Queen’s Gallery at Buckingham Palace presents The First Georgians: Art and Monarchy 1714-1760. The show focuses on Georg Ludwig, Elector of Hanover, and marks the 300th anniversary of his accession to the British throne as George I in 1714. As Britain’s first constitutional monarch, George I established an unbroken line of royal succession right up to our present Queen Elizabeth II.

Exploring the reigns of George I (r. 1714–27), and his son George II (r. 1727–60), The First Georgians takes a fresh and exciting look at the political, intellectual and cultural life of the newly established dynasty.

Through items such as documents and correspondence, battle plans and military maps, drawings, paintings, furniture and table settings, the display looks at every aspect of liberal Georgian society.

The royal family had a huge appetite for works by artists such as Frederick Zincke, John Vanderbank, Anthony van Dyck, David Teniers and William Hogarth- to name but a few.

This was a time when artists began to achieve success and fame through their own efforts rather than through royal patronage. In addition, an emerging leisure class, with money to spend on luxury goods, opened up a whole new market for artists such as Antonio Canaletto whose very popular views of London contrasted sharply with William Hogarth’s satirical humour commenting on the new styles of the nouveau riche. 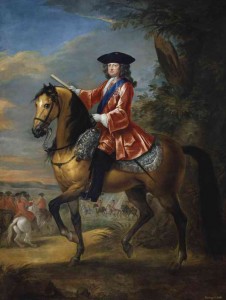 Desmond Shawe-Taylor, Surveyor of The Queen’s Pictures, and curator of The First Georgians noted on the Royal Collection website, ″This exhibition provides a definitive insight into the reigns of George I and George II and is the culmination of years of research into how this era is represented in the Royal Collection. The items that the early Georgian royal family collected, coveted and displayed in their residences reveal not only their artistic taste, but also the very human concerns that drove them.″

Highlights of the Exhibition

George I by John Vanderbank

The Royal Family commissioned many portraits such as George I painted by John Vanderbank in 1726. Experts believe that collector and connoisseur Richard Bateman commissioned this imposing oil painting, which King George V subsequently acquired. 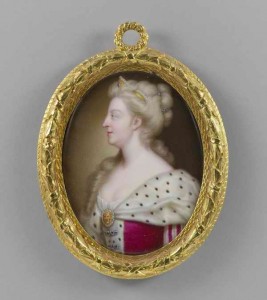 Another lovely portrait, this time on a locket, is Christian Friedrich Zincke’s Queen Caroline (c.1727-30).

This tiny enamel, barely 4.7 x 4.00 cm, has probably been in the Royal Collection since its creation.

The miniature is a smaller version of another portrait by the same artist, also in the Royal Collection.

Caroline wears state robes with an ermine cloak secured with a gold Medusa brooch. The reverse of the locket carries the inscription CAROLINE, / Queen to GEORGE II / Painted by Zincke. 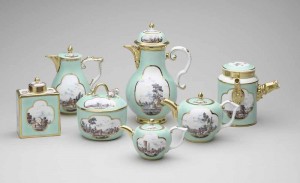 The Georgians had exquisite taste, choosing the finest china from the Meissen porcelain factories. This turquoise and white tea service features landscape and seascape scenes. Each piece is delicately edged with gold paint.

The Georgians also liked intricately worked items such as the silver gilt rococo Neptune Centrepiece, most likely made for Frederick, Prince of Wales.

Decorated with sea creatures, shells and pieces of coral, the item features a Neptune finial, and was probably used to serve fish soup or seafood. Dolphins, entwined around the supports of the tureen, may have been a humorous reference to the Prince of Wales as the English dauphin or ‘dolphin.’

The Prince was definitely a fish lover, and his household accounts show a wide variety of fish including turbot, sole, cod, salmon, trout, pike, carp, flounder, lobsters and shrimp. One of his favourites was oysters ordered by the barrel.

The centrepiece has two different hallmarks– one is the mark of Andrea Boucheron from Turin, dating from the 1720s. The second, from London, dated 1741/2, is the mark of Huguenot goldsmith, Paul Crespin, who had a workshop in Soho. The two marks tell us the silver from Turin was re-used and incorporated into Paul Crespin’s work.

Experts suspect other artists also worked on the piece including the Liègeois goldsmith and founder of the Chelsea porcelain factory, Nicholas Sprimont, whose mark appears on other pieces of the service to which this centrepiece belongs. 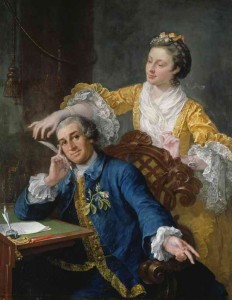 David Garrick with his Wife Eva-Maria Veigel by William Hogarth

This canvas, painted in about 1757-64, shows actor-manager David Garrick with his wife, Eva-Maria Veigel, a Viennese dancer known as Violetti. The subject matter stems from an earlier tradition, that of genius inspired by his muse.

Hogarth shows Eva-Maria in a somewhat frivolous pose which could be interpreted as either inspiring or distracting Garrick from his work, The Prologue to Taste.

The artist signed and dated the canvas W Hogarth / [p]inxt 1757. The book on the desk has the inscription SHAKE/SPEARE, and the paper Garrick is writing on bears the words The Prologue to / Taste.

David Garrick commissioned the work, paid £15 for it, and then refused to take it. Apparently, he was unhappy with his likeness and there is evidence that Hogarth scored through the eyes. X-rays show the sitters originally set in a domestic interior which Hogarth changed to a column with a hanging cord.

After Hogarth’s death his widow gave the painting to Mrs Garrick, and George IV acquired the work later.

To accompany this exhibition, the Royal Collection Trust has released a comprehensive catalogue titled The First Georgians: Art & Monarchy 1714–1760. Edited by Desmond Shawe-Taylor, the publication features 480 wonderful illustrations showing over three hundred items, many of which have not been seen in public before.