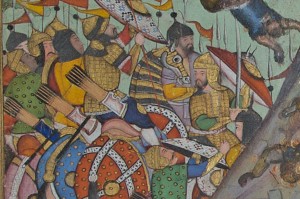 Detail from the Akbarnama, the official history of Akbar’s reign by Abu’l Fazl, commissioned in 1589. Currently in the Victoria and Albert Museum, London. Photo credit: Paris Franz

Like his predecessors, Babur and Humayun, the Mughal emperor Akbar, leader of an empire which covered much of India at its height, had a keen interest in the arts. Unlike Babur and Humayun, Akbar had both the time and the means to allow those arts to flourish, principally in the realms of architecture and the arts of the book.

Akbar’s reign, from 1556 to 1605, saw a prodigious output of illustrated manuscripts of every type, from treatises on astronomy and law to dynastic chronicles and classics of Persian literature.

The Mughals: An Artistic Dynasty

The Mughals had an interest in the arts from the beginning, although circumstances prevented them from developing the arts to their fullest extent. Babur, the founder of the dynasty, reigned for just four years, from 1526 to 1530. He has a reputation as an acclaimed writer, and his memoirs, the Baburnama, have been called a classic of the genre.

Babur’s son Humayun had a troubled reign, and spent 15 years in exile. He took refuge during part of this time at the court of the Persian Shah Tahmasp, whose artistic atelier was renowned. Two of Tahmasp’s finest painters, Mir Sayyid Ali and Abd as-Samad, subsequently entered Humayun’s service in Kabul in 1549, and were with him when he retook Delhi in 1555. Humayun evidently had ambitions for his own atelier before his accidental death the following year.

Both emperors clearly had other things to worry about than founding an influential imperial atelier and fostering a distinctively Mughal style of art. That was left to Akbar.

Akbar: Artistic Grandeur as an Instrument of Government

The emperor Akbar was a dynamic, complex and occasionally contradictory figure. He was a ruthless warlord intent on conquest, yet at the same time he devoted much attention to matters of philosophy, religion and the challenges of governing a vast and diverse empire. He was, the sources tell us, illiterate, yet at his death, his library was estimated to contain 24,000 volumes.

Over and above any aesthetic considerations, Akbar’s patronage of the arts was an aspect of government, in an age where cultural grandeur reinforced the regime’s legitimacy.

Detail from the Akbarnama, the official history of Akbar’s reign by Abu’l Fazl. Currently in the Victoria and Albert Museum. Photo credit: Paris Franz

A number of sources survive to help us understand the workings of Akbar’s studio, including colophons that detail the date, place and name of the scribe of a particular work. There are also a number of informal scribal notes on various folios, telling us such things as the distribution of labour, the amount of time allocated to a particular painting, and the subject of the work.

The court historian Abu’l Fazl mentions the studio in the Ain-i Akbari, an encyclopaedic account of the empire. He details the atelier’s master artists, both Muslim and Hindu, and Akbar’s hands-on approach. According to Fazl, Akbar inspected the work of his painters every week, and rewarded the best.

The phenomenal output of the imperial atelier over the course of Akbar’s reign saw the number of painters employed swell from about thirty painters at the time of the vibrant Hamzanama in the 1560s, to around 130 artists by the mid-1590s. The artists usually worked collaboratively, with one artist designing the illustration, and the other colouring it in. Some specialised in overall design, while others focused on portraits.

Like the empire as a whole, Akbar’s atelier was diverse. The Mughal court attracted a number of Persian artists who brought with them a distinctive approach, including fine draftsmanship and a meticulous approach to colour, along with such stock Persian figures as willowy, beardless youths and heavily bearded elders.

Yet Indian elements were there from the beginning. Native Indian flora and fauna made their way into ostensibly Persian settings, as did earthier colours and an element of vibrant physicality absent from the more ethereal Persian tradition.

European prints began to circulate around this time as a result of maritime trade with the West, and European influence can be seen in the use of pictorial depth in some of the paintings.

The Artistic Legacy of the Mughals

Akbar’s reign saw the development of a distinctive Mughal style of art, combining classical Persian motifs with Indian vibrancy and the European innovation of perspective. The art reflected the empire in its vibrancy and inclusiveness.