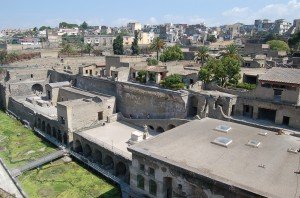 View of Herculaneum from the former sea front. The suburban baths and beachside arches are in the foreground, overlooked on the terrace above by seaside villas. Copyright image by Natasha Sheldon, all rights reserved.

Have you heard of Herculaneum?

If you have, you might know it was quite close to Pompeii. You may also be aware that it suffered destruction at the same time as its famous neighbor in 79 AD.

But would you know much more? The larger Pompeii, glamourized with its brothels, bars, amphitheatre- and the tragic casts of its former citizens- tends to overshadow Herculaneum, which is an injustice.

For this small, seaside town, popular as a summer retreat for holidaying Romans is no less spectacular, fascinating- or tragic. And like Pompeii, the story of Herculaneum’s destruction lies preserved in its archaeology.

Herculaneum lay only 4.5 miles northwest of Vesuvius. But surprisingly, the start of the volcano’s eruption did not affect it as severely as nearby Pompeii.

True, alarming tremors would have shaken the town and plunged it into blackness as the 33 km high eruption column over shadowed it. But as an absence of lithics in the archaeological layer belonging to this early stage of the eruption shows, the southwards direction of the stratospheric winds kept the rain of lapilli, small balls of volcanic ash that plagued Pompeii, away from Herculaneum.

This meant that the roads remained clear- allowing anyone who was sufficiently alarmed by events to flee by land.

Whereas Pompeii’s destruction was drawn out, Herculaneum’s was sudden and decisive.

In the early hours of the second day of the eruption, Vesuvius’s eruption column collapsed under its own weight, releasing clouds of hot gases, dry, heated ash and rock fragments known as pyroclastic surges.

Pliny the Younger, who witnessed the eruption from across the bay at Naples at Misenum, described one such surge as: ‘a fearful black cloud, rent by forked and quivering bursts of flames’ which ‘sank down to the earth and covered the sea.’

At between midnight and 1 am, the first of these surges left Vesuvius, and travelled at 68 mph towards Herculaneum.

The Effects of the Surge: Carbonization 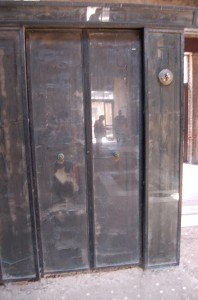 Original wooden screen door in the House of the Grand Portal, Herculaneum. The ash from the pyroclastic surges protected organic objects from incineration, instead carbonising and preserving them. Copyright image by Natasha Sheldon, all rights reserved.

Within 3-4 minutes of arriving at the walls of Herculaneum, the first surge covered the town. It blasted its way over buildings and through streets; its high pressure forcing fine ash into the smallest nooks and crannies, coating Herculaneum in a grey shell.

Scientists compared analyses of the macroscopic, microscopic and ultrasonic features of bones found at Herculaneum to modern bones heated to a range of temperatures consistent with pyroclastic surges.

As a result, anthropologist Pier Paolo Petrone has concluded that the first surge to hit Herculaneum was at least 500 degrees Celsius. This meant that not only life in Herculaneum was in danger, but the very fabric of the town.

At this temperature, the surge should have incinerated anything organic in its path. But paradoxically, the ash protected against this. Instead, it caused the superheating of any food, wood or leather it encased and carbonized- preserving instead of destroying. This is why furniture, food- even window and doorframes- survive in actual rather than cast form in Herculaneum.

The second effect of the surges was to rip off roofs and smash walls- depositing the remains some distance away.

The second surge, which followed minutes after the first was particularly destructive. Archaeologists discovered a whole roof, complete with beams, rafters and roof tiles deposited upside down on the beach below the seaside terrace of Herculaneum. 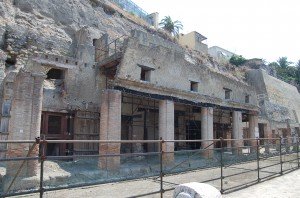 Buildings in Herculaneum still embedded in tufa. Note: No roofs are in situ. The modern town of Ercolano is build directly over the ancient town. Copyright image by Natasha Sheldon, all rights reserved.

Following in the wake of this destruction was the flow, a volcanic mud mixed with fragments from Herculaneum’s buildings. It buried the town under 23-25 metres of material.

The maximum depth occurred along the seashore, where the flow halted as it began to cool, resulting in a ‘back up’ of material. Such was the build up of debris along the shoreline that it pushed the sea front out some 400 metres further.

The People of Herculaneum

But what of the people? Did they really take their chance to escape in the early stages of the eruption?

Initially, archaeologists believed they did. Excavations of residences revealed only around 30 bodies of individuals, who for one reason or another, could not leave. Amongst them were a baby left in its crib in the House of the Mosaic Atrium, a sickly young boy trying to hide under his bed in a gemstone workshop, and a man locked in his room in the House of the Shrine of Augustus.

Then, in 1981, excavations around the former seafront revealed human remains. More excavations in 1982 resulted in the discovery of more bodies and the remains of a capsized boat.

Later that year came the most astonishing discovery of all: the excavation of a series of rooms or fornici in the retaining wall at the base of the suburban baths. These may have been used as warehouses or boat stores for the harbor. But they were also the last refuge for a sizable portion of the population of Herculaneum. In all, experts have found 296 skeletons (not counting the 59 bodies on the beach); each arch sheltering several dozen people.

Ash may have protected wood from the extremes of the surge’s temperatures. The people of Herculaneum were not so lucky.

Dr. Petrone, an expert involved in research into the remains of Vesuvius’s victims in both Pompeii and Herculaneum, explained to Decoded Past the tell-tale signs that the people of Herculaneum died from the heat of the surge:

‘Evidence of the corpses exposure to high temperature, apart postures, were the explosion of the skulls, gross and micro cracking of bones and teeth, blackening of the bones less protected by soft tissues, hyper flection of hands and feet,’ he said.

Death in the Arches…

It seems that the people may have fled to the boat sheds because of the earth tremors. According to Professor Andrew Wallace-Hadrill in his book ‘Herculaneum: Past and Future,’ the concrete arches served as the perfect place to shelter during an earthquake. They were, however, not much protection against pyroclastic surges.

The vaults may have offered a degree of shelter. But the skeletons of the victims’ show that they died of thermal shock as the surge hit. Their blackened bones and bent limbs due to muscular contractions are both evidence of extreme heat. Death, fortunately, would have been instantaneous.

…And on the Beach

Escape by sea by this time was hopeless. In Misenum, Pliny describes how ‘the sea sucked away…apparently forced back by the earthquake: at any rate it receded from the shore so that quantities of sea creatures were left stranded.’

Yet it seemed at the time of the surge, 59 people in Herculaneum may have attempted to do just that. This left them exposed to the superheated cloud boiling towards them.

The force of the surge hurled them to the ground. The bodies of many skeletons found on the beach have breakages caused by the force and impact of the surge. But at the same time, the searing temperatures ignited hair, clothing and flesh causing instant death, vaporizing soft flesh and tissues.

So intense was this heat, that in some cases, craniums have been found, red-stained from where the high temperatures caused their brains to expand and split from the subsequent explosion.

The Value of Herculaneum

Ash from the pyroclastic flow quickly replaced the flesh of these bodies. Today only the skeletons remain- unlike at Pompeii, where the unique conditions of the disaster caused impressions of the bodies to form.

But while the remains of Herculaneum’s citizen’s may not be as visually dramatic as Pompeii, analysis of their bones offers important insights into Roman life.

© Copyright 2014 Natasha Sheldon, All rights Reserved. Written For: Decoded Past

Pliny the Younger. The Letters of the Younger Pliny. (1969). Penguin Classics.

Roberts, Paul. Life and Death in Pompeii and Herculaneum. (2013). The British Museum.