The Crosby Garrett Helmet on display at the British Museum in 2014. Image copyright Paris Franz, all rights reserved.

It was a fine spring day in May 2010 when a father-and-son metal detecting team headed out to the village of Crosby Garrett in the Eden Valley in northern England. Or maybe, as some sources say, it was a single metal detector hobbyist.

The confusion is indicative of the uncertainties that surround the story of what happened that day and after.

In any case, the story goes that they had surveyed the area before without finding much of interest. But that was going to change.

When the metal detector gave off a signal, the duo found a startlingly intact face mask, buried face down and topped by around 70 pieces of broken bronze.

At first, the finders thought it was Victorian. After some research, they discovered that it was, in fact, a Roman parade helmet; of the type used by elite cavalry units in the flamboyant military displays known as hippika gymnasia, where riders would show off their skills before high-ranking officers and occasionally even the Emperor. Examples have been found from across the Empire, including the spectacular Ribchester helmet, discovered in Lancashire in 1796 and now housed in the British Museum.

Legal Loopholes and the Definition of Treasure

The finders lost no time in contacting the auctioneer Christie’s, delivering the helmet on 4 June 2010. As a single find of bronze, the helmet was not classified as treasure under the Treasure Act of 1996, and the finders were therefore at liberty to sell it on the open market.

After some delay, the finders informed the Portable Antiquities Scheme (PAS), the voluntary scheme which encourages finders to report their discoveries, of the precise find-spot. It wasn’t until the end of August that two Finds Liaison Officers were able to visit the area. The PAS report and confirmation of the Cumbrian find-spot made it acceptable for museums to bid on the helmet.

A limited survey and excavation of the site has revealed a hitherto unknown Romano-British settlement in the area of the find-site. However, the discovery of the helmet and its subsequent lifting had removed any archaeological relationships which might have shed light on how it got there.

From an archaeologist’s point of view, this was the problem with metal detecting in a nutshell. 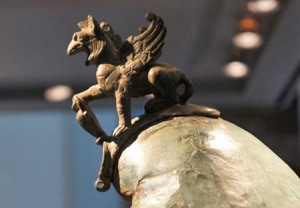 The griffin is made from a different alloy to that used in the rest of the helmet. Image copyright Paris Franz, all rights reserved.

Christie’s hired independent conservator Darren Bradbury to restore the helmet. This went ahead despite requests to delay the restoration to allow scientific examination of the pieces. Bradbury undertook some 240 hours of work to restore the helmet, emphasizing that all work was reversible.

Richard Hobbs, curator of the Romano-British collections at the British Museum, noted during a talk at the museum that current scholarly thinking meant it was unlikely a museum would have agreed to restore the helmet as scholars believe they can glean more knowledge from its broken state.

The museum would most likely have made a replica. If they had decided to restore the helmet, it would have been a much longer and more scholarly process. In truth, the restoration was less about scholarly understanding and more about achieving a good price at auction. Archaeologists from the PAS were able to make a couple of visits during the restoration process.

They dated the helmet to the late first century or second century AD. Analysis of the metal using a portable X-ray fluorescence spectrometer showed that the helmet’s composition was 82 percent copper, 10 percent zinc and 8 percent tin; while the griffin, controversially attached to the top of the helmet, comprised 68 percent copper, 4 percent zinc, 18 percent tin and an exceptional 10 percent lead. When new, the visor would have had a silvery sheen, while the helmet would have been a coppery yellow.

The helmet became public knowledge in September when Christie’s announced its antiquities auction for the following month. The helmet graced the cover of the catalogue with an estimated price of £200,000-300,000. Forewarned, Carlisle’s Tullie House Museum immediately launched an appeal that was extraordinarily successful, raising nearly £2 million in less than a month in the middle of a recession.

Donors included the J Paul Getty Jr Charitable Trust, which gave £75,000 and the National Heritage Memorial Fund, which raised its original offer of £450,000 to £1 million. An anonymous benefactor offered £50,000 if this could be matched pound for pound by the public. It was. Meanwhile, the finders ignored the suggestion of a private treaty sale where they would sell the helmet directly to Tullie House Museum

The auction took place on 7 October 2010. The bidding was fast and furious and quickly surpassed the estimated price. The agent for Tullie House bid up to £1.7 million but an anonymous bidder ‘pipped them at the post’ with a bid of £2.3 million for the helmet.

The level of interest, and indignation, at the result of the auction prompted questions in the House of Lords. Lord Renfrew of Kaimsthorn, the former Cambridge University professor of archaeology, was one of many to call for an urgent review of the Treasure Act. 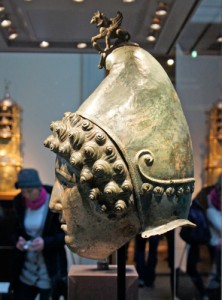 The general air of secrecy surrounding the Crosby Garrett helmet (e.g. the continued anonymity of the finders and buyer, the gap between the discovery of the helmet and the investigation of the find-spot) is common for the art trade, but has led to speculation about what really happened.

Some scholars have questioned whether the helmet really was found in isolation, and whether it was even found in Crosby Garrett. The speed of the helmet’s restoration has also come in for criticism.

The Helmet on Display

As for the helmet itself, it may now be in a private collection but it hasn’t disappeared from view completely.

The owner has lent it to a number of institutions, including the Royal Academy as part of its blockbuster Bronze exhibition in 2012, the Tullie House Museum in Carlisle and the British Museum, where it will be on show until 27 April 2014.