Few men in history were more murderous and depraved than the emperor Caligula. In a spree of mass killings brought on by paranoia and mental illness, he wiped out a great deal of upper class Romans and potential heirs. However, one survived. One scrawny, boring, not particularly good looking potential heir.

His name was Claudius, and on the day of Caligula’s assassination he was found cowering in a window curtain. Indeed, his cowardice and inability to stand out had saved his life, and now, it had made him emperor of the roman world.

One of the very first problems faced by the newly-inaugurated emperor was the distancing between his empire and the mineral rich kingdoms of Britannia. With the death of the friendly king Cunebelinus, his two sons had taken up the throne and utterly rejected Roman contact, influence, and trade. Thus, it was put to Claudius to launch a full scale invasion of the island, and succeed where his predecessors had failed in establishing an official Roman colony.

The Invasion of Britannia

By 43ce, Claudius had readied the II Augusta, the IX Hispania, the XIV Gemina, and the XX Voleria Legions, as well as a few war elephants for good measure. They crossed the English Channel and landed at Rich Borough (in the southeast of modern day Kent). The roughly forty thousand man army quickly moved north, establishing friendly kings when possible and fighting when necessary. The ultimate goal is reached once his troops reach Camulodonum, the former capital of Cunebelinus, and establish a permanent Colonia (a settlement of retired legionnaires).

The success of the invasion made Claudius an overnight success. The once scrawny and unlikable boy had become a war hero and a champion of the empire. Within Rome a triumphant arch is built, and since an arch can only be seen by so many people, the image of the monument is put on a coin and circulated throughout the empire. His ‘DE BRITANN’ series would be used to purchase day to day items from nearly a decade, as Claudius would not soon let his subjects forget his exploits in the north for the rest of his reign. Unfortunately for him, the emperor did very little else worth celebrating during his time. The invasion remained his sole achievement and this is reflected in the variety of his coins.

Queen Boudica and the Iceni Revolt

A little over a decade after the success of Claudius, the territory we today know as Wales was slowly being conquered by a succession of Roman Generals. The most noteworthy being a man named Suetonius Paulinus, not be confused with the historian. However, all progress is derailed when tragedy strikes. Upon the death of a notable allied Celtic commander named Prasutacus, according to the historian Tacitus, his possessions are seized and his family is beaten terribly. His widow, the famed Queen Boudica, seizes upon the opportunity and sparks a rebellion against Roman rule. The Iceni tribe raise eighty thousand men and begin marching on roman settlements while the legions are occupied by fighting in Wales. Camulodonum, London, and Verulanium, the three main centers of Roman culture on the island, are all pillaged and raised.

It is noteworthy that in the time before the revolution, Prasutacus had been busy minting coins that bore his portrait, with nearly classicized hair, and Latin inscriptions. This goes in hand with what many of the kings of the time were doing, as far as adopting a more and more ‘Romanized’ approach to their sovereignty. Nearly immediately after the start of the rebellion however, new “Boudica” coins are minted depicting the queen in a highly Celtic form. No inscriptions are given, simply the face of the queen adorned with an Iceni crown and a traditional horse symbol.

Rome and Its Coins in Britannia

Within a span of less than twenty years the island had witnessed an invasion, a successful settlement, and a devastating revolt. Mirroring this was the rise and fall of Romano/British currency in the first half of the first century CE. Yet, Rome and its coins are only just beginning to take root in Britannia, and a new age for the island is in store. 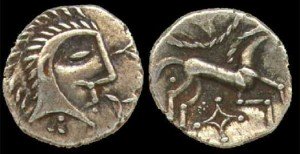 A purely Celtic-looking coin commemorates the revolt and a rejection of Roman Influence. Image by The Coin Project.

Mattingly, Harold. Roman Coins from the Earliest times to the Fall of the Western Empire Reprinted with Further Corrections and Additional Notes. (1967). London: Methuen.

© Copyright 2013 Brian McConnell, All rights Reserved. Written For: Decoded Past

Brian McConnell holds degrees in Archaeology and Classical Studies. He has been a working member of multiple archaeological labs at both The American University in Cairo and Indiana University, his … Read More about This Expert