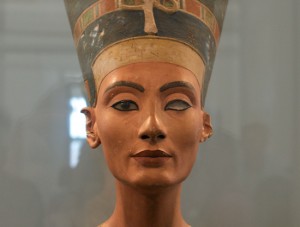 When Berlin’s Neues Museum reopened in 2009, there was little doubt about who was the star of the show. The bust of Queen Nefertiti, an iconic image of ancient Egypt, drew the crowds just as it had ever since its unveiling in Germany in the 1920s.

Just as in the 1920s, the bust stirred up controversy. The Egyptians want it back, and the Germans want to keep it.

The Enduring Appeal of Nefertiti

It’s been over 100 years since German archaeologist Ludwig Borchardt discovered the bust in December 1912, and some 3,300 years since famed Eighteenth Dynasty sculptor Thutmose carved the bust out of limestone, but she’s still looking good.

With her fine, elegant features and swan-like neck, it’s little surprise that she has become one of the most famous faces in art, rivalling the Mona Lisa. And, as is so often the case with beautiful women, everyone wants a piece of her.

Her name, appropriately, means ‘the beautiful one has come.’

The reopening of the Neues Museum saw Egyptian demands for the return of the bust to Egypt, claiming the bust had been illegally exported. The Germans refused, denying the allegation and adding the bust was too fragile to move in any case.

Nefertiti: A Link to Ancient Egypt

Aside from her beauty, the bust of Nefertiti excites such fascination due to the Queen’s position in ancient Egyptian history. She was the wife of Akhenaten, the heretic Pharaoh who overthrew the old gods in favour of the solar god Aten and built a new capital in the desert dedicated to the sun god’s worship. He called the new city Akhetaten – the Horizon of the Aten – in modern Tell el-Amarna on the banks of the Nile.

After Akhenaten’s death and the subsequent return to orthodoxy, the Egyptians abandoned Amarna. The city withered, and Akhenaten’s successors actively effaced references to the royal family. Nefertiti herself only came to light after Champollion’s decipherment of hieroglyphics in 1822.

The Discovery of the Bust of Nefertiti

It was a sad epitaph for Akhenaten’s religious revolution, but a boon for archaeologists. Eminent archaeologist William Flinders Petrie began excavating at Amarna in 1891, assisted by a young Howard Carter; the German Oriental Society began work there in 1907. 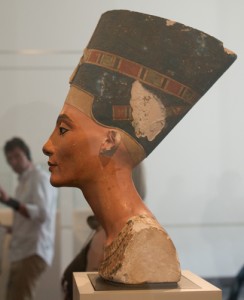 The bust of Queen Nefertiti is still hotly contested between Egypt and Germany. Image credit Paris Franz, all rights reserved.

It was in December 1912 that Borchardt discovered the home and studio of the sculptor Thutmose and the bust of Nefertiti, noting in his diary: “Description is useless, see for yourself.”

In 2009, Der Spiegel reported that the German acquisition of the bust may not have been completely above-board.

A document written in 1924 details the meeting between Borchardt and Gustave Lefebre, Egypt’s chief antiquities inspector, to divide up the spoils of the dig on a 50:50 basis, a common and accepted practice at the time, known as partage.

The document, written by the secretary of the German Oriental Company who was present at the 1913 meeting, notes that Borchardt “wanted to save the bust for us” and consequently took pains to downplay the Nefertiti bust. Borchardt claimed the figure was made of gypsum, when in fact it’s made of a limestone core under a layer of stucco.

On the other hand, one assumes Lefebre took careful note of what had been found, with a view to claiming the best pieces for the Cairo Museum. That was his job, after all. He was an experienced man, although not an expert in sculpture.

So Nefertiti made her way to Germany, where she joined the collection of Borchardt’s patron, the philanthropist James Simon. He later donated his collection, including the bust of Nefertiti, to Berlin’s museums.

Is Nefertiti a Fake?

An interesting side-light appeared in May 2009, when two historians, Henri Stierlin and Erdogan Ercivan, claimed the bust was an early 20th century work. Stierlin claims that someone created the bust to test ancient pigments, but it was so admired by a Prussian prince, Johann Georg, that Borchardt “didn’t have the nerve to make his guest look stupid” and pretended it was genuine.

Dietrich Wildung, the director of Berlin’s Egyptian Museum, dismissed the idea: “A beautiful woman and a putative scandal. That always sells.”

Nefertiti has been on the front lines of various culture wars during her time in Berlin. Slated for inclusion in a museum in Hitler’s new capital, the Nazis packed her away in a salt mine during World War Two. But she fared better than the museum – the Neues Museum suffered several hits during a Royal Air Force raid in 1943, and was further damaged by Red Army troops in 1945.

She managed to evade the Soviet Union’s trophy brigades, but they did get another of the museum’s prized exhibits, the treasure of King Priam, discovered by Heinrich Schliemann in 1890.

Egypt and Germany have periodically engaged in a sometimes not-so-diplomatic dance over the Nefertiti bust in the years since World War Two. The topic became less pressing since the advent of the Arab Spring and the Egyptian Revolution, which has thrown up other, more urgent problems of looting and destruction.

But, once things calm down, it’s a safe bet to assume Egypt and Germany will resume their diplomatic tug of war for the favour of Nefertiti, “the beautiful one.”

Der Spiegel. Archaeological Controversy: Did Germany Cheat to get Bust of Nefertiti?. (2009). Accessed on April 29, 2014