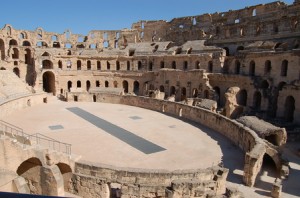 Imagine the amphitheater with gladiators in the arena and spectators in the seating area. This enormous structure may have never been finished. Picture credit: Natasha Sheldon.

Two hundred and ten kilometers south of Tunis is El Djem, a modern Tunisian market town and home of the largest building in Roman Africa.

The amphitheater of El Djem was built in the late second century AD. A symbol of Roman power and the prosperity of the provincial town of Thysdrus, El Djem’s original name, its impressive remains preserve not only the seating areas but also the working features of the arena.

Today, this magnificent building is often used for concerts, and Tunisia’s Symphonic Music Festival took place there in 2012. It is an ideal setting for the performance of classical music.

Thysdrus was founded by the Romans in 46 BC on the site of an original Punic settlement. The area was famed for the quantity and quality of its olives, which quickly led to the prosperity of Thysdrus.

By the second century AD, the town had a population of 30,000 and was regarded as the leading center for olive oil in Roman North Africa. The corresponding increase in wealth and significance meant Thysdrus could instigate a program of public and private building works. The amphitheater was one of these. 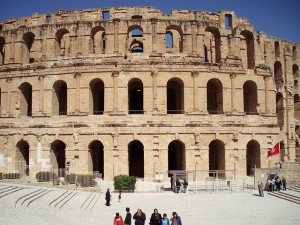 A view from the outside reveals the massive size of the Amphitheater of El Djem. Image by zongo69 CC BY-SA 2.0

The Amphitheater of El Djem – Design and Function

The amphitheater standing today replaced a smaller original structure that seated 8000 people. Built of red limestone, it was the third biggest amphitheater in the Roman world and would have seated 30,000 spectators. It dominated the skyline of Thysdrus, as it does that of modern El Djem.

The structure measures 149 meters long, 124 meters wide and 36 meters high, and has three stories. Each story consists of a series of arches formed from composite engaged columns (a Roman development combining elements of  Corinthian and Ionic columns). An internal stairway lead to a covered walkway that ran around the circumference of each level allowing access to the seating.

Archaeologists uncovered the basement area of the arena in 1904. It remains remarkably intact and gives a clear picture of how the arena would have functioned. Sixty-five meters long, it is divided into two vaulted galleries containing cells and rooms for housing the wild beasts and gladiators who took part in the games.

The arena floor still has the openings that allowed wild animals to be raised and lowered from these cells via a lift system. A removable strip also ran down the center of the arena. This was the roof of the basement cells, which was raised when the arena was not in use to air these otherwise confined areas. 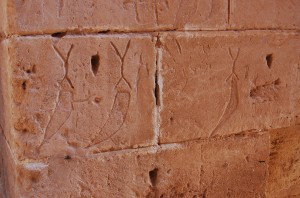 The stones in the walls at El Djem still bear the marks of clamps that helped builders move them into place. What appear to be cravings are builder’s diagrams. Picture Credit: Natasha Sheldon.

Building the Amphitheater at El Djem

The arena also preserves unique evidence of Roman building techniques. Many of its stone blocks are pitted with triangular holes. These were deliberately carved at the top of each block just above the center of mass to accommodate clamps for lifting the stones.

Each clamp was attached to a crane, a triangular wooden frame with a  rope or chain hanging from its central point.  As each block was lifted, the rope or chain attached to the clamp would be pulled tight by the weight of the stone, forcing the lower end of the clamps to grip it tightly while the stone was levered into place.

Some of the clamp holes were accompanied by diagrams made by the builders, showing just how the blocks were moved into place. They show the relative positions of the clamps, shaped like an elongated ‘X,’ and the cranes.

It is possible that the arena was never finished. In the third century AD, Thysdrus went into decline after its involvement in a rebellion against Imperial authority. The introduction of a new tax on olive oil production sparked widespread unrest across Tunisia, culminating in the murder of the Imperial procurator. Thysdrus was central to these events.

The town’s citizens proclaimed a local man, the 80-year-old Gordian, emperor, but Gordian’s reign was short-lived. After only a few weeks, he was killed in Tunis and replaced by Maxininus. The revolt was over and Thysdrus was sacked, never to recover its former status.

Damage and Restoration at El Djem

The amphitheater survived the fall of Thysdrus and the Roman Empire. It served as a fortress against Arab invaders in the 5th century AD and during skirmishes between different Arab factions in the 7th century AD. It remained a complete structure until it was robbed of its stone to help construct the modern village of El Djem in the 17th century.

A British attack did further damage during the Second World War, when the amphitheater served as a refuge for German soldiers. Despite all this, it remains a relatively complete structure. Three stories, complete with stairs and galleries, survive on one side.

Restoration begun between 1974 and 1980 has reconstructed half the seating area, making it possible for people to once again enjoy events in the amphitheater. The amphitheater is protected as a UNESCO Heritage site and is one of Tunisia’s most visited attractions.