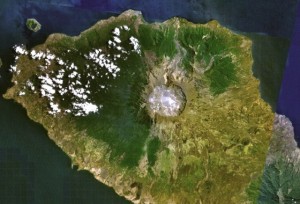 April 17, 1815, saw the largest, and arguably the most deadly, volcanic eruption of historic times when Indonesia’s Tambora volcano quite literally blew its top.

The statistics are mind-boggling. After a series of preliminary events, all earth-shaking in their own right, the volcano discharged an estimated volume of over 150 cubic km of ash (which darkened the skies around for two days) and 50 cubic km of magma, generating an ash plume which reached over 44 km in height.

It’s unclear exactly how many people died. Estimates vary; the Global Volcanism Program puts it at 60,000 and volcanologist Clive Oppenheimer quotes “over 71,000,” while the United States Geological Survey puts the number at 92,000 (including deaths from starvation). While these figures don’t compete with the devastation caused by some earthquakes, they make it one of the world’s most deadly eruptions in terns of loss of human life.

So, just how big was the Tambora eruption? Like earthquakes, we measure volcanoes on a logarithmic magnitude scale, in this case known as the Volcanic Explosivity Index (VEI). The scale was developed only in 1982 so that measurements of historic eruptions have to be effectively “backdated.” 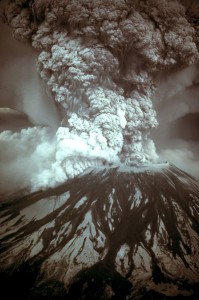 Tambora was two orders of magnitude larger than the 1980 eruption if Mount St Helen’s. Image: USGS

The VEI is based upon the volume of erupted material (for earthquakes the measure is the amount of energy released) which we can estimate from physical evidence left behind. At the low end of the scale (VEI 0) are the ongoing eruptions which happen daily and erupt cubic metres of material, while the top (VEI 8) includes so-called super-colossal eruptions. (These occur very rarely, the last known being Yellowstone around two million years ago.)

From the data above, the power of Tambora is evident. But the significance of this particular event goes beyond its vital statistics; it gives a clear demonstration of how Earth systems interact – and how the influence of a volcanic eruption can reach far beyond its immediate area and time to have physical effects upon those well beyond its usual reach.

Volcanoes erupt gas as well as ash, and this (most notably sulphate) provides nuclei for formation of pollutants. The 1815 eruption, according to Oppenheimer, “injected ≈60 mt of sulfur into the stratosphere … which resulted in pronounced climate perturbations.” 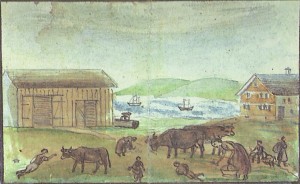 This contemporary painting illustrates the famine caused in Europe by the Tambora eruption. Image by Anna Barbara Giezendanner (1831-1905)

Those perturbations involved climate cooling. “Anomalously cold weather hit the northeastern USA, maritime provinces of Canada, and Europe the following year,” goes on Oppenheimer. “Crop failures were widespread and the eruption has been implicated in accelerated emigration from New England, and widespread outbreaks of epidemic typhus.”

It is as a result of the eruption of Tambora that following year, 1816, gained notoriety as “The Year Without a Summer,” with the average global temperature reduced by an estimated 1 degree C. 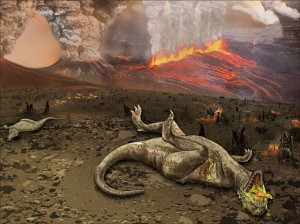 Tambora was a single eruption with impacts that persisted for a year or more. At a larger (and fortunately very much less frequent scale) volcanoes don’t always behave in that way but can sometimes go on for many years- even, in their most prolific form, millions of years.

Many times larger than Tambora (the Columbia River plateau consists of an estimated 170,000 cubic kilometres erupted over a period of around two million years) these flood basalt events released prodigious quantities of sulphates and, in consequence, had catastrophic impacts upon climate.

There’s a clear correlation between these and some of the planet’s major extinctions; and some scientists argue that the end of the dinosaurs may be associated with the eruption of the Deccan Traps, which occurred at the same time.

Tambora – Not Dead Yet

Tambora is part of a highly active volcanic chain which runs along the Java and Sumatra island arcs. And it isn’t done yet; at the time of writing the Global Volcanism Program was reporting a raised level of alert to 2 (on a scale of 1-4). But its previous three eruptions reached a maximum of just VEI 2 – so it would seem that there’s no need to panic just yet.