The period between AD 300 and 1100 saw the demise of the Western Roman Empire and the growth of the Byzantine Empire. Mass migrations took place across the Continent, and Christianity and Islam became major religions.

Bringing the ‘Dark Ages’ into the Modern Era

Many people refer to Medieval Europe as the ‘Dark Ages,’ but this bright, modern and airy space shows the culture and craftsmanship of these varied peoples as anything but dark. With Sutton Hoo as its focal point, the installation looks at the diverse cultures and craftsmanship of medieval Europe and beyond, including Scandinavia and North Africa, as well as the Atlantic and Black Sea regions.

Dr. Sue Brunning, Curator of the Insular Early Medieval Collections, and lead curator on this project, tells Decoded Past: ″…the collection we have here is fantastic. It’s one of the foremost collections in the world for early medieval Europe material.

I think the big challenge was trying to interpret that material… it’s so expansive, lots of different objects, lots of different people, a really long chronological span from about 300 to 1100 AD. It covers the whole of Europe so trying to weave all that material together in a way that’s comprehensible to our visitors and to show how these different peoples related to each other across time and space was one of the biggest challenges. But we came up with a number of key messages that we weaved through the displays and used the Sutton Hoo ship as a unifying element in the centre of the room. I think we’ve managed it.″

Sutton Hoo: Centrepiece of the Exhibit

Discovered 75 years ago in Suffolk, the Sutton Hoo ship burial is one of the British Museum’s most important treasures. Excavated in 1939, the grave, dating from about AD 600 and located inside a 27 metre-long ship, is most likely that of an Anglo-Saxon king, possibly Raedwald,, a powerful East Anglian king, whose prized possessions, including his helmet and reconstructed shield, gold millefiori shoulder clasps and gold buckles, are now on display.

Made in about AD 600, the original helmet looked very different from the mostly reconstructed one you see here. Bronze panels embossed with animals and heroic scenes shone brightly. The face mask has bronze eyebrows inlaid with silver wire and garnets. A gilded dragon sits vertically in the centre of the forehead, creating the appearance of a flying dragon or powerful bird with outstretched wings. The moustache forms the tail, the nose is the equivalent of the body, and the wings consist of bronze eyebrows inlaid with silver wire and garnets.

The technical expertise shown in the making of these heavy gold clasps is simply outstanding. Garnets, glass inlays and filigree plaques sit on the curved surface of the clasps, and even after being buried for over 1,300 years, they show no sign of buckling.

At the centre of the ornament is a group of large garnets and millefiori glass inlays. The frames of the central panels feature a rare technique known as lidded cell cloisonné. Garnets, millefiori glass and opaque blue glass fill hundreds of individual gold cells.

The round ends of the clasps show two boars, with their heads turned down, framed by fine gold filigree. 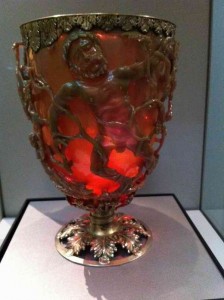 Next to the Sutton Hoo artefacts one of the most important items on display is the Lycurgus Cup – it’s just so unusual. When held up to the light the cup changes from an opaque green colour to a glimmering translucent red. The Romans discovered that these unusual optical qualities occur if you add small particles of gold and silver to molten glass.

Dr. Sue Brunning, lead curator on this project, spoke to Decoded Past about the exhibition.

Decoded Past: ″Did you have to make any difficult decisions about what to include and what to exclude?″

Dr. Brunning: ″We’ve got some of the museum’s foremost treasures here in this one single room, and there’s a lot of other stuff as well. We’ve actually got about a thousand objects in total in here at the moment.

In the previous gallery there were a lot of showcases and a lot of stuff in all of those showcases.

As visitors came in they’d be faced with this barrage of material and they didn’t really know where to start. So what we’ve done, we’ve removed multiples of very similar types of objects and focused on the key objects that tell those messages that we want to get across to our visitors.

We are able to give all the objects space to breath. For us as academics and experts we like to see a lot of stuff… we like to see lots of different types of objects all together. For our visitors, who make up the bulk of our audience, that’s not really what they want to see, and it doesn’t really help them to understand the period, so we did have to thin out the display which for someone like me is difficult, but I think we’ve achieved a nice balance.″

Decoded Past: ″Can you tell me more about some of the items that are on display for the first time?″

Dr. Brunning: ″Yes… well, we had a few objects that are brand new, which are generally small metalwork finds which we’ve acquired through the Treasure process. We also have a number of objects which we’ve had in the museum for a while but have never been able to display. They’ve been taken out of storage and shown in this room for the first time.

… those include some late Roman mosaics and this fantastic necklace set made of lots of copper alloy chains which comes from the Baltic Sea region. Previously, it was too large to fit into any of the showcases that we had in here so we had a bespoke showcase made for it and it’s looking absolutely stunning.″

Decoded Past: ″Has your research led to the reinterpretation of items?″

Dr. Brunning: ″Yes… there’s a whalebone plaque from the Viking world which we thought was something like an ironing board, but we now think it’s a food tray. There’s also a bent staff that we thought was a roasting spit, but now we think it’s a wand of divination used by a Viking sorceress. So these things are not new, but they’ve been reinterpreted freshly for the new display.

Really, the other thing that’s new, in a sense, is that we are showing these objects as they’ve never been shown before, so that it’s almost like having a brand new collection. We’re seeing new facets of the objects… they look more stunning than ever before.″

Decoded Past: ″What is your favourite item, and why?″

Dr. Brunning: ″That’s actually an easy question… it’s the shoulder clasps that come from the Sutton Hoo ship burial and that’s because they are the objects that inspired me to become an early medievalist. I’d previously held the traditional view of this period, that it was ‘the dark ages’ and that after the Roman Empire culturally sophisticated things just sort of disappeared. But I saw these objects when I was an under graduate, saw the amazing workmanship of the garnet and gold cloisonné construction and just thought how can any culture that created these be described as a dark age culture, and from then on I became hooked on the Anglo-Saxons, and amazingly here I am at this point having presided over the refurbishment of the gallery that houses them.

The British Museum wishes to thank Sir Paul and Lady Jill Ruddock for their generous donation which has helped make this exhibition possible.

Sutton Hoo and Europe AD 300-1100 is a permanent display in the Sir Paul and Lady Ruddock Gallery at the British Museum. If you go, allow plenty of time to explore this outstanding display – when you return, share your thoughts.

Did you have a favourite piece, and why?