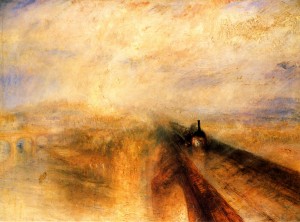 Can we study the history in art, the history of the steam engine, by studying J.M.W. Turner’s oil on canvas, “Rain Steam and Speed the Great Western Railway?” (1844 from the National Gallery, London). Credit: Turner Bequest, 1856.

Art history, history of art, or history in art? Traditionally, academics have studied the visual arts as objects created within a specific historical development and within specific stylistic contexts. Art history is the study of human-made products or human-created live performance pieces that express visually aesthetic or communicative ideas, emotions or even political viewpoints. In other words, academics study how the visual arts reflect time and place.

Is this the only way we can study the visual arts? When you think about it, aren’t art objects often revealing historic events? If so, can’t the arts (all forms of creative expression) also serve as a means to study history? Alan Gowans suggested that one cannot study the history of art without also studying the history in art. He based his theory on the premise that, within each work of art, there are historical elements of the society, the culture and the experience of the artist who produced it.

Consider a work of art as being an expression of the artist’s ideas, thoughts, beliefs, feelings, and so on. It is that and so much more. If we agree that art is expressing someone else’s thought processes, then it follows that we accept the arts as a form of communication. As such, the arts are telling the viewer something, both aesthetically and historically.

The concept that art is a form of communication leads to the conclusion that art is a language. It is the key to unlocking the mysterious messages of the creator’s visual creation. As Roland Barthes wrote in Image Music Text,

The visual arts, like language, need a receiver, an audience, to interpret the work, to analyze it, to like it or to dislike it. Through the receiver, the work becomes complete. The communication succeeds and the message is transmitted. The elements of time and space of the visual work interact with the time and space of the viewer to construct its meaning. The work has communicated its message because someone has been the recipient; someone has read the visual image looking for clues to assist in the understanding, the comprehension, of its content in order to interpret and understand the artist’s message.

The Death of General Wolfe by Benjamin West depicts a real historical event, but the details are not all accurate. The painting is in the National Gallery of Canada, Ottawa.

A visual work of art evolves from the artist’s individual experience. This experience includes all of the external influences, not the least of which is the actual human history which surrounds the artist’s place in time and space. Take the work of Benjamin West. Considered one of the most influential painters in the American colonies, West created mostly historical work.

West’s famous painting, The Death of General Wolfe, depicts a romanticized image of the well-known historical figure, British General James Wolfe, during the epic Battle of Quebec (1759: part of the Seven Years’ War). The artist depicts an almost religious image of the general’s death during this battle, drawing from the artist’s fascination with religious painting. General Wolfe is almost Christ-like in his reclining pose, part of a triangular composition that, as the National Gallery of Canada describes, resembles Christian “Lamentation” scenes.

The costumes in this painting are considered accurate enough historically, but the entire display of figures on the Plains of Abraham is too staged to be considered an historical depiction of what actually happened. Yes, General Wolfe was killed. However, West wasn’t there to witness the event. West’s rendition of the general’s death is based on historical documentation and stories shared. Is West’s painting an historic record? Can his work be studied from an historical perspective: the history in his art?

Studying history in art suggests a need for competency in the artist’s ability to be accurate. Artists who depict historic events or historic personages are influenced by the art market, the general public, or, more importantly for most artists, the patron. Historic works are often commissions and whoever orders the work has the power to demand certain romantic elements in the work, elements that mar the accuracy of the historic event being depicted.

Are these totem images historically accurate? Did Emily Carr paint “Kitwancool” 1928 (oil on canvas, Collection of Glenbow Museum, Calgary) with a precise eye for historic and artistic detail?

However, artists have also taken it upon themselves to record an event, a place, or a person of historic significance for the sole purpose of preserving something that might otherwise be lost. Can we trust these artists to make an accurate rendition in their creation?

Emily Carr, A.Y. Jackson and James Richardson (to name but a few) were caught up in the early twentieth-century idea of preserving a ‘dying’ art form by painting images themselves of the villages and totem poles of the Northwest Coast of British Columbia. This was a carry-over of the nineteenth-century romantic image of the ‘noble savage’.

Their work has often been criticized as being inaccurate. Yet their intent was genuine. Do we accept these works as historic records? We know now, and certainly many people knew at the time these artists were painting, that the First Nations were no longer considered a ‘dying’ race and their art was undergoing a renaissance. The intent to record a ‘dying’ art form may indeed be flawed, but can we study history, Northwest Coast First Nations history, by studying these works?

All Historical Records are Biased

The study of history in the arts may be flawed in its concept. Although the intent of the creator is to provide an historic record of an event, a place or a person, the creative exercise in itself provides us with a personal bias: that of the artist. The message is a moment in time, a capsule in history; the language of communication is the work of art. As such, one could study the history in art. All records of history are biased. Written records are influenced by the writer, the person recording the event in written form. Visual records are influenced by the artist.

History in the arts? Or, history of the arts? Or, perhaps just art history? Can one study the arts from only one perspective? An integrative approach to the study of any history allows the receiver of the message (the viewer, the reader) to understand and appreciate all that is being communicated. The arts and history are interlocked in both time and space.