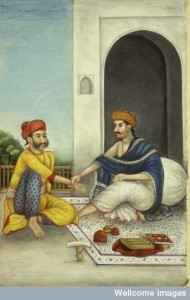 No visit to a Western medical clinic is conducted without one very basic procedure: taking the pulse.

It may be surprising to learn that taking the pulse is one of the earliest diagnostic measurements used in Traditional Chinese Medicine (TCM), and was developed over two thousand years ago.

The practice of measuring a patient’s heartbeats became disseminated in the ancient world via trade routes.

Through the work of Christian missionaries, pulse-taking reached Western Europe in the 17th century.

Sphygmology, or the procedure of taking the pulse, entered the practice of Traditional Chinese Medicine at least 2500 years ago. A popular legend about the physician Bian Que (C. 500 B.C.E.) claims that the prince of Guo was thought to be dead until Bian Que examined his pulses. Determining that the prince was in a coma, Bian Que used acupuncture and herbal medicine to resuscitate him.

Another legend about Bian Que is that he predicted the death of a nobleman, based on the deterioration of the man’s health, as determined by measuring his pulses.

The first written record of sphygmology in TCM is in the Huang-Di Nei-Jing (Yellow Emperor’s Cannon of Internal Medicine), which dates back to the 2nd or 3rd century B.C.E. The Huang-Di Nei-Jing describes the taking of the pulses by touching the radial arteries located near both wrists. By measuring the pulses, they believed that it was possible to discover the unique patterns of an individual’s body, and therefore diagnose illness.

Written during the Jin Dynasty (3rd century C.E.), Wang Shuhe’s Maijing (Classic of Pulse Diagnosis) is the first book that deals exclusively with pulse measurement. The Meijing mentions the cunkou -the place at the wrists where the radial artery can be felt pulsating. In his 10-volume work, Wang Shuhe divided the pulses into 24 distinct categories. This detailed differentiation is intended to determine whether a patient is sick, what kind of illness the patient has, the severity of the illness, and the ability of the patient to respond to treatment.

The categories of pulse classification used in TCM have expanded to include 28 different types. Each category reveals the condition of one particular aspect of the internal organs and tissues. A strong, steady pulse, for example, would indicate to the practitioner that the individual is healthy. On the other hand a “scattered pulse” is irregular and barely perceptible. This indicates that the patient is critically ill, and may be near death. Other pulse categories include: rapid, slow, soggy, stringy, slippery, choppy, thready, tense, and so on. Pulses also occur in combination: for example, a pulse that is both slippery and rapid may indicate pregnancy, according to TCM. 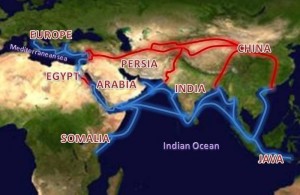 Practice of Taking the Pulse Spreads

Sphygmology spread from China to other countries and was incorporated into various medical systems via trade routes over land and sea. First it spread to Tibet between the 7th and 8th century C.E., where it became a standard practice. After that, it spread to India and, through India, the practice of taking the pulse was introduced into the Middle East.

The first written records in the Middle East concerning the pulses are by the Persian philosopher, Avicenna (981-1037 C.E.), who is considered the founder of early modern medicine and clinical pharmacology.

Among his most famous works are The Book of Healing and The Canon of Medicine, which was in use as a standard medical textbook at many Islamic and European universities until the early 19th century.

The Canon of Medicine mentions more than 40 kinds of pulses, 20 of which are believed to be cited from the work of Wang Shuhe.  A few centuries later, a medical encyclopedia in the Persian language cites Wang Shuhe and his work on sphygmology.

Sphygmology is introduced to Western Europe

Sphygmology entered Western Europe only in the 17th century C.E.  During the Ming dynasty (C.E. 1368-1644), Christian missionaries to China acted as a bridge of communication between China and the West. Thus, while introducing principles of Western medicine into China, missionaries also brought some practices of TCM to Western Europe. Among these were sphygmology, acupuncture, herbal medicine and vaccination.

As different medical systems adopted the use of sphygmology, they altered the practice of taking the pulse in various ways. Nevertheless, measuring a patient’s pulse has remained an essential tool for the rapid analysis of a patient’s vital signs, alongside the many sophisticated inventions of the twenty-first century.

Law. The Western Missionary and the Communication of the Traditional Chinese and Western Medicine in Ming and Qing Dynasties. Accessed August 15, 2013.