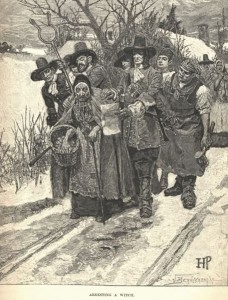 Mass hallucinations and alleged witch-hunts have taken place for centuries – could the Smurl haunting be part of the same phenomenon? Image by Howard Pyle.

Strange things happened in the West Pittston, Pennsylvania, duplex where the Smurls lived. Janet and her husband Jack, along with children Heather, Dawn, Carin, and Shannon, and their German Shepherd named Simon, lived in the duplex next to Jack’s parents, John and Mary Smurl.  According to the Smurls, the phenomena began in 1974.

This case involves demonologists, a skeptic, a “priest,” and an exorcist who was an expert in the paranormal – what happened to the Smurls in the 1970s?

The family claimed that a TV burst into flames, water pipes leaked, scratches appeared on walls, and toilets flushed by themselves. They also heard footsteps and music from unplugged radios while empty rocking chairs swayed, and experienced foul odors permeating the place, and drawers opening and closing by themselves. The Smurls also claimed the house had a paranormal macro menagerie: an incubus and a ghostly pig-like creature.

The Smurls stated that they tried to get help from the Scranton Roman Catholic Diocese, which said it would consult experts. Janet alleged she thought a Father O’Leary was helping, but she came to believe he was a demon in the disguise of a priest!

In 1986, the Smurls finally heard about and contacted self-proclaimed demonologists Lorraine and the now-late Ed Warren.

The Warrens’ claim to fame stems from their involvement with The Amityville Horror which they proclaimed was real. The American Society for Psychical Research and other prestigious parapsychological organizations debunked this; one of the fraud’s perpetrators, George Weber, even confessed to the media that it was a hoax.

In West Pittston, the Warrens conducted no scientific investigation and didn’t question the Smurls about their feelings regarding the alleged phenomena; however, they announced that three spirits and a demon haunted the house. They asked a Father Robert F. McKenna (later a bishop, who was a member of an order of Catholicism that the Vatican does not recognize) to perform an exorcism. Two unsuccessful exorcisms ensued; the third one appeared to work, but the family later determined that it had failed.

It was around this time that the Smurls contacted the media and a book publisher.

CSICOP is an acronym that stands for the Committee for the Scientific Investigation of Claims of the Paranormal. The organization investigates alleged paranormal phenomena. (The organization has since abbreviated their acronym to CSI.)

CSIOP Chairman Paul Kurtz offered to investigate the Smurl Haunting because of the attention the case garnered, and because of the Warrens’ involvement, and wrote a report about the results, “A Haunting in West Pittston? Not a Ghost of a Chance,” that appeared in the Winter  1986/87  issue of The Skeptical Inquirer.

Kurtz sent two teams of investigators to West Pittston. When they arrived, the Warrens denied them access to the house, although the Smurls gave one of the teams permission to investigate the Haunting claims. CSI members extensively phone interviewed the Smurls, neighbors and reporters working on the case.

What Caused the Smurl Haunting Reports?

Kurtz believed the hauntings were a hoax for a few reasons, including conflicting report from teenaged Dawn, and Jack’s health – he had brain surgery three years before the incidents to relieve water on the brain, which might contribute to delusions.

Allentown psychologist Robert Gordon thought that the family possibly suffered from mass hysteria similar that which happened during the Salem witch hunts and trials. He said shared tension might cause this, and common symptoms could involve delusions or hallucinations. When Kurtz asked the Smurls to undergo comprehensive psychological and physiological exams, they refused.

Neighbors had complained to town officials for years about foul stenches originating from a sewer pipe near the Smurl’s home as well, this could be the source of the odors the Smurls reported. In addition, There was intermittent settling of homes in the area due to layers of underground mine veins, which could have caused rocking chairs and other disturbances.

Kurtz noted the possibility that financial gain could have caused the hoax as well. Within days of the story about the alleged haunting making national news, a witness allegedly saw Jack negotiating with Scranton businessman Ralph Loma, head of the Star Group, a Hollywood production company. Jack initially denied this, but Loma confirmed he tried to get exclusive rights to the story about the case. In November, St. Martin’s Press proclaimed that it signed a book contract with the Smurls.

Ed Warren, in attempting to defend his refusal to allow the CSI team to investigate the Smurl’s home, called a press conference. He claimed he had tapes of terrifying sounds and a videotape of the dark form in the duplex. When someone asked for them, he couldn’t remember the name of the TV company to which he gave the tapes. He also said the Catholic Church had the “evidence.” The Catholic Church says that they don’t.

The Scranton Diocese asked Father Alphonsus Trabold, exorcist, professor and paranormal expert from St. Bonaventure University, in New York, to investigate. When bishops feel that they don’t have a qualified exorcist in their diocese, they’re allowed to find one in another district. In 1998, I spoke with Father Trabold to find more information about the incredible phenomena in The Haunted, a book co-authored by the Warrens and the Smurls with Robert Curran.

Father Trabold told me at that time that he had previously worked with the Warrens until he discovered they weren’t sincere, were not what they purported to be, and were given to sensationalizing. He chuckled when explaining that when he went to one of their lectures, they saw him and toned down their act, so he wore disguises when he went to their future talks.

Father Trabold was very kind when he talked about the Smurl case and his investigation. He believed the family was sincere and that something happened, but he couldn’t say it was demonic.

While the Smurls possibly experienced strange occurrences in their home, the facts don’t support proof of a demonic presence. Was their experience the result of mass hysteria, local conditions, greed, or some combination of the above? We may never know.