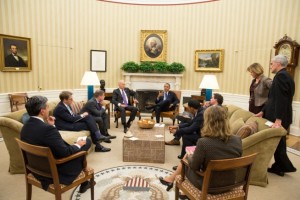 On November 14, 1995 John Boehner represented the 8th Ohio district in the U.S. Congress, after winning an election in 1990. In Illinois, Barack Obama was teaching at the University of Chicago Law School.

This was also the first day of a government shutdown resulting from failed budget negotiations between President Bill Clinton and the Republican leadership in both the House and Senate of the 104th Congress.

Hundreds of thousands of federal employees did not go to work, and the President cancelled a scheduled trip to Asia.

There were two government shutdowns in 1995, one ending on November 19th, the other on January 6th, 1996. That same month, President Clinton gave his State of the Union Address during which he acknowledged a private citizen, Richard Dean, sitting in the chambers as an invited guest.

Dean, a Vietnam War veteran, had survived the Murrah Building bombing in Oklahoma City and had rescued three women in the process. The chamber erupted in a standing ovation for Mr. Dean.

But Dean was also a twenty-two year employee with the Social Security Administration. President Clinton noted that Dean had been forced out of work by the two government shutdowns, working without pay during the last shut down to help Social Security recipients.

In his autobiography, Bill Clinton states, “I didn’t think I had to worry about a third government shutdown; its consequences now had a human, heroic face.”

The current government shutdown, begun at midnight on October 1st, is the result of a budget impasse between the Republican-controlled House under Speaker Boehner, and the Democrat-controlled Senate aligned with President Obama. So-called “Tea Party” Republicans, seeking to defund the new health care law or “Obamacare,” used the Congressional “power of the purse” to close the government, much like House Speaker Newt Gingrich did in 1995 in an effort to force cuts in Medicare and Medicaid.

Click to Read Page Two: Power of the Purse