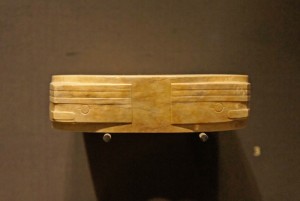 Liangzhu era cong is a mysterious class of artefact thought to have shamanic significance. Copyright image by Paris Franz, all rights reserved.

When it comes to legitimizing power, there are few things more useful than ideology.

For a ruler to have the gods, the spirits, and the ancestors on his side, indicating that he is the recipient of that peculiarly Chinese concept of the Mandate of Heaven, was worth any number of armies.

So it would appear logical that shamans, famed for their special ability to contact and influence the world of the spirits, should play a part in the development and consolidation of power in ancient China.

The Role of the Shaman

Yet their powers set them apart, a position that could sometimes backfire on them. When misfortune struck a community, such as drought or disease, the shaman could end up in the role of scapegoat, as the community killed those thought to have the power to bring about these calamities.

Today, the popular image of the shaman is often of a wild, marginalised, somewhat otherworldly figure, beating a drum and dancing himself, or herself, into a trance, possibly with the aid of narcotics. Historian Sarah Milledge Nelson suggests in Shamanism and the Origin of States: Spirit, Power and Gender in East Asia that this is not the whole story.

Could a shaman also be “a leader of the community, a respected person whose ability to contact spirits offers proof of the ability to lead while conferring the right to do so?”

Perhaps both images are correct. Perhaps shamans were indeed key figures in the development of states in ancient China, only to find themselves increasingly sidelined, their skills co-opted by rulers who reserved to themselves the ability to interact with the spirits and the ancestors.

The Evolution of the Shaman in Ancient China

In Chinese historiography, the term shaman usually translates as the word wu, the character for which first appeared on the Shang oracle bone transcriptions. Experts have variously translated the word as magician, as shaman, as priest – and it can refer to both a part-time religious practitioner and a full-time professional priest.

The evidence suggests that the role of the wu changed over time. As Chinese civilisation developed, it became increasingly clear that manipulation of rituals and religious structures were the most effective methods for control of the masses. Such manipulation enabled the dominant group to gain more power, and their religious authority in turn legitimized that power.

It’s a tactic that continues to work.

Such developments saw the status of the wu change. The elites and at least some of the wu merged, a phenomenon reflected in later literary sources, such as the Shiji of Sima Qian in the second century BC, which tells of the Five Legendary Emperors, and attributes shamanic activities and abilities to them.

While stories of legendary emperors are not reliable historical evidence, archaeology has corroborated the connections between the wu and the elite. Two tombs of high status individuals from the Longshan Period (2500-1700 BC) cemetery at Taosi, Shanxi Province, revealed four intact pottery drums, key wu paraphernalia.

The role of shaman and ruler fused by the time of the Shang Dynasty, from roughly 1500 to 1050 BC. The rulers now monopolized the shaman’s role of intermediary between heaven and earth.

Divination as a Political Act

The shaman usually asked questions that were more practical than philosophical, dealing with such things as warfare, hunting and the possibility of rain. There is archaeological evidence for divination using animal shoulder blades, where the shaman would heat the blades and interpret the ensuing cracks. The practice dates back to the late fourth millennium BC, and reached its height during the Shang Period, which produced the famous oracle bones. Discovered at Anyang around the turn of the twentieth century, the oracle bones were of particular note as they bore inscriptions that form the earliest Chinese writing.

Ritual performance was also a means to reinforce royal authority. Sacrifice played a particularly important role, a role which would endure through much of Chinese history. The many rituals required of the emperor confirmed his status and power.

The Rise and Fall of the Shaman

Over the centuries, shamanism in ancient China evolved into a mechanical exercise handled by a bureaucracy. By the time of the Western Zhou, from 1050 to 771 BC, the power of the shaman lessened. There was a growing separation between political affairs and religious activities. Emperors no longer employed shamans as counselors at court; instead, they became professionals of an inferior status, hired as necessary to deal with issues such as droughts and sickness.

This sidelining of shamanism was not the case everywhere in Zhou-era China. The Songs of the South, attributed to the fourth century BC poet Qu Yuan and full of shamanic imagery, was a product of the Kingdom of Chu, a state notorious for its shamanic beliefs and rituals.

In his introduction to the book, David Hawkes quotes the first century BC historian Ban Gu who wrote, rather disapprovingly, of the Kingdom of Chu as a place where the people “believe in the power of shamans and spirits and are much addicted to lewd religious rites.”

The survival of shamanic ritual and belief in the state of Chu throws the changing status of the shaman elsewhere in China into greater relief. Shamanic practices became identified with folk religion, which the elites increasingly regarded as a challenge. As civilisation developed, the spiritual powers of the shaman were tamed and utilised in the pursuit of political power.