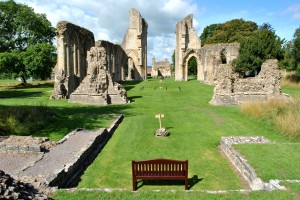 Glastonbury today. Something of the monastic peace remains in the atmosphere. Image courtesy of Lauren Prat

Glastonbury Tor is a sacred spot to pagans, Christians and lovers of Arthurian romance, but in Tudor times it saw the grisly execution of the last abbot of Glastonbury, executed without proper trial for standing in the way of Henry the Eighth and Thomas Cromwell.

With him went two of his fellow monks, John Thorne, monastery treasurer, and Roger James, sacristan, all charged with stealing monastery property.

Who Was Richard Whiting?

Richard Whiting was born in 1461 at Wrington, Somerset, and became a Benedictine monk at the renowned abbey of Glastonbury. Having shown talent for scholarship Whiting taught for a while in the abbey school until elected Chamberlain, responsible for all the abbey’s administration.

This is a demanding position that requires much administrative talent, and Whiting held it for several years until Abbot Bere died. Cardinal Wolsey, who held the right to appoint abbots at Glastonbury, was in no doubt about the successor.

According to The Glastonbury Shrine, Whiting – in Wolsey’s words – was, “An upright and religious monk, a provident and discreet man, a priest commendable for his life, virtues and learning.” An ideal description of an abbot, so in 1525 Whiting was consecrated abbot, a position he was to hold till his execution.

Cromwell vs. Monasteries: The Crisis Begins

Whiting sought no clash with the king and so in 1534 he signed the act of supremacy for his monks, accepting Henry as head of the church. But this merely staved off the inevitable. The king appointed the Protestant fundamentalist Thomas Cromwell as vicar general of the church.

Cromwell disbelieved in monasteries and saw an opportunity to  re-shape English religion according to his will, so nothing that a monastery could do would satisfy him. He also had to deliver their wealth to the king, bankrupted by his excessive lifestyle and constant wars. Cromwell appointed commissioners, Thomas Moyle, Richard Layton and Richard Pollard, to inspect monasteries and find grounds to seize their goods and lands.

Glastonbury Abbey: The Arrival of Layton

Henry the Eighth’s most ruthless commissioner, Layton, arrived in 1535 and proceeded to inspect the abbey’s accounts. Whiting’s accounts were perfect and the commissioner, unable to find anything to support a calumny against the abbot, left frustrated. But Whiting was under no illusion. He knew that the persecutors would come again.

Fall of Glastonbury: The Second Visit

On 19th September 1539, Abbot Whiting, now the last abbot in Somerset, was visiting one of the monastery’s granges, or outlying farms run by monastic brothers, when Layton arrived to finish the job- and this time he had muscle in the form of troops. Glastonbury, one of England’s most ancient and revered abbeys, was to finally fall.

The troops took Whiting from the Grange and brought him back to the abbey, where he found that not only was the abbey being plundered, but that  Henry’s men were in the midst of ransacking his personal chambers and effects. This time the commissioners found evidence, but how strong it was remains unclear.

Henry’s men claimed that the abbot had managed to take 20,000 crowns [about £5000] from the abbey funds. This seems a fraudulent claim, as the money belonged to the monastery, and there was no evidence that the abbot had stolen it for personal gain. It is possible that he had withdrawn money for the care of the monks who would suffer being robbed of their homes and livelihoods through Henry’s avarice.

But the Lord Chancellor’s Remembrance, his document about the case, states that no incriminating letters were found as noted in New Advent’s “Blessed Richard Whiting.” Still, the king’s men took the abbot to the Tower of London for more attention from Thomas Cromwell, who was now Lord Privy Seal, a senior officer of state with great power.

But worse, Layton claimed to have found a document, a booklet listing arguments in favour of the claims of Catherine of Aragon, Henry’s discarded first wife and deemed evidence of treason. But according to The Glastonbury Shrine, the remembrance by the Lord Chancellor, Lord Audley, contains a chilling note, “Abbot of Glaston to be tried and executed there with his accomplices.” The verdict was known before the trial. Tudor justice!

The Illegality of the Glastonbury Trial

As an abbot, Whiting was a peer of the realm and therefore entitled to a trial before his peers in the House of Lords. No such trial was held. Instead there may have been a local trial in Wells, near Glastonbury, which is not legally appropriate for a man of Whiting’s rank. Cardinal Gasquet observes that Lord John Russell arranged for a local trial for 16th November 1539, held in the Bishop’s Palace at Wells.

Gasquet cites a letter by Russell speaking of the trial, but no official records have survived. There was also supposed to have been a list of jurors, but this list has not survived. It seems that the trial was a formality designed to tell the victims of the fate that was to await them and go through the semblance of justice.

Glastonbury Tor is one of the most sacred sites in England, revered by pagans and Christians. Image courtesy of David Woolfenden.

The execution was speedy. Workers spent the night of the 16th November erecting a large gallows on the sacred tor. The three victims were dragged on hurdles through the streets to the tor’s summit where they were hanged, drawn, and quartered.

From the summit, the abbot could see that the abbey had already been destroyed and its people scattered. He would have looked down on a land that was not the land in which he grew up, or for which he had worked.

We remember Whiting today as Blessed Richard Whiting, since the Roman Catholic Church elevated him to the status of blessed in 1895. But his story gives a warning that even in a country with strong judicial traditions, a tyrant can arise and, if unchallenged, can undermine justice. The price of justice is constant vigilance.

The Shrine of Our Lady of Glastonbury. Blessed Richard Whiting and Companions. (2015). Accessed on February 06, 2015