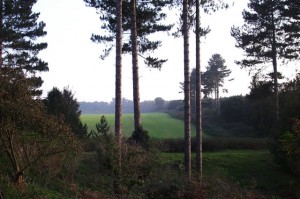 Rendlesham Forest – the reported landing site of UFOs, according to military members in 1980. Image by Simon Leatherdale.

Rendlesham Forest UFO: Was this ‘flying saucer’ real – or just another hoax? From the BBC to Matt Lamy – no one really knows for sure.

According to the BBC’s investigation, reports of UFOs began on December 26, 1980; however United States Air Force (USAF) dates them in the early morning hours on the 27th. Security policemen John Burroughs and Budd Parker reported that they were on duty by the east gate of Royal Air Force (RAF) Woodbridge, in Suffolk, United Kingdom (UK), when they noticed an alien craft’s mysterious lights which hovered, then landed in the forest.

On December 27, 1980, Lieutenant Bruce Englund allegedly told Base Commander Ted Conrad that the UFO returned during an officers’ party at RAF Bentwaters.

According to an article in the BBC’s Inside Out, written on June 30, 2003, former USAF Security Policeman Kevin Conde said the UFO incident was a practical joke that he played on the men stationed at the Woodbridge base. He said he drove his patrol car to a place where people in the gatehouse couldn’t see it, turned on the red and blue emergency lights and shone white flashlights through the haze into the air.

According to Conde, the lights weren’t from a UFO, but were those of a 1979 Plymouth Volare.

In December, 1980, Suffolk bases were on high alert because the United States’ relations with the USSR (now Russia) had deteriorated. Conde questioned the airmen’s behavior in light of the perceived Russian threat. He queried, “If they’re out in the forest seeing red and blue pulsing lights and I’m back here doing this prank with red and blue pulsing lights, what else do they think they’re seeing?” He added that people should question the competence of military officers in charge of a front line base during the Cold War, especially those who couldn’t even tell the difference between a UFO’s lights and a police car’s.

However, James Easton, a writer specializing in UFOs, found eyewitness reports concealed in a now-released US government file which conflicted with the others. Some men confessed that the mysterious lights were beams from the Orford Ness lighthouse. One man said he touched a UFO. Another alleged that nothing happened at all.

After his investigation, Easton declared the lights were from the now defunct Shipwash Buoy in the area.

Then, at some point, a number of files went missing from the government’s Rendlesham archive. The Ministry of Defense received a request for its records of the Rendlesham Forest incident in 2000. When officials looked for them, they discovered an enormous gap in the defense intelligence files relating to the UFO. A series of notes ensued, sparking speculation that someone took the files home; others believed that there was an intentional attempt to cover up the incident.

Officials apparently noticed the disappearance when someone released 8,000 previously classified documents about UFOs. Missing documents included photographs and sketches of UFOs created by the public, eyewitness reports and a commercial pilot’s and his son’s testimony.

What Happened in the Rendlesham Forest: Matt Lamy’s Version

According to Matt Lamy, in his 1980 book, 100 Strangest Mysteries, the NSA, one of the US’s most covert intelligence organizations purportedly used the forest for research into over-the-horizon radar systems to detect targets at very long ranges during the Cold War.

Shown here is a sculpture of a UFO permanently exhibited in Bremerhaven, Germany. Image by Garitzko.

Lamy says, when USAF patrolmen Burroughs and Parker said they saw the alien craft land in the forest, officials tried to convince them that an airplane crashed, but according to the airmen’s statements, there was odd electricity in the air and a sudden light flash before the airship rose upward. The following morning, men reported finding evidence of the UFO’s presence: broken tree tops, three holes in the ground in a triangular formation and ‘infrared radiation.’

When the UFO allegedly returned on the 27th, Base Commander Conrad asked his deputy, Lt. Col. Charles Halt, to investigate. Halt gathered a team of specialists, took a Geiger counter to measure radiation, and a Dictaphone to record notes. He set up a cordon around the woods to prevent curious airmen and villagers from getting in the way. An hour earlier, security patrol saw strange lights floating in the sky above the forest that suddenly disappeared. Radio communication to the base and with each other showed static interference, like that experienced the previous night.

Men in the forest sighted the UFO at 1:48 AM. They reported seeing a glowing light resting on a pillar of yellow mist moments before it split into an array of rainbow colors. They followed the craft for an hour before it shot up into the sky. Hundreds of military personnel and civilians witnessed the mysterious incident.

USAF police saw a dim reddish light opposite a lighthouse over an eerie mist on the ground. It transformed into a solid triangular object with a rough surface, that covered an area of approximately thirty feet. They described it as featuring a sharp pyramid about twenty feet high on top of the UFO. They also claimed that there was a distortion in perceptions and time; everything moved in a dreamlike pace.

At RAF Neatishead, an unidentified object appeared on radar. It returned no signal and outperformed the RAF’s aircraft. A major investigation requisitioned the Neatishead and RAF Watton radar tapes a few days later. USAF intelligence officers who collected the tapes at Watton claimed a UFO crashed and that the base’s senior officers witnessed it. They added that witnesses saw aliens floating in beams of light underneath the spacecraft.

Lamy wrote that UFO researcher Georgina Bruni published a “seminal” book about the Rendlesham UFO, You Can’t Tell the People, in November 2000 after she interviewed witnesses and toured the US base. Her research attracted the attention of former Prime Minister Margaret Thatcher, whose words were, “You must have the facts, and you can’t tell the people.”

Speculation Prevails About the UFO Sightings

According to Lamy, Halt and his British liaison officer, Squadron Leader Donald Moreland, met with their respective governments. Lamy says they decided not to release any information to the public, but to allow subterfuge and speculation to prevail about what really happened in Rendlesham Forest.