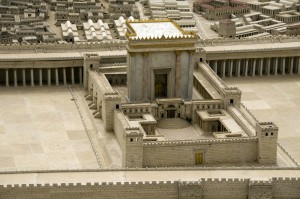 This model shows the design of the Jerusalem Temple, where Jesus talked with his disciples. Photographer unknown.

We are so used to talk of heaven and hell that we overlook the fact that Jesus talked very little about going to heaven. He promised his followers that they would enjoy eternal life in the Age to Come, which would begin at the Last Day, when the dead would be raised.

Jesus talked of everlasting damnation, but he gave no systematic account of what happens to those who die before the Age to Come arrives. This is known as the eschatological gap, and it has been filled with a variety of speculative concepts. Indeed, heaven itself is speculation, as Jesus said very little about it.

Did Jesus Believe in Reincarnation?

The idea of reincarnation persists in Western culture, if not in mainstream Christianity: in June of 2013, internationally known talk show host Oprah Winfrey interviewed Dr. Brian Weiss, a best-selling author and expert in the psychiatric therapy known as past-life regression. According to the Oprah Winfrey Network (OWN), 288,000 viewers watched the Super Soul Sunday episode. Nonetheless, few people know that many early Christians believed in some form of reincarnation, but the idea fell out of favour in the sixth century.

John 9:1 shows that reincarnation ideas were present among Jesus’ followers. The apostles ask of the man born blind, “Did this man sin or his parents that he was born blind?”  The idea that you were punished for your parents’ sins was common in Judaism, but that  a man could sin and be born blind as a consequence is more difficult to explain. The most obvious alternative is that he had sinned in a previous incarnation – the idea of reincarnation was in circulation at the time, as it has always been in Hasidic Judaism.

This would indicate that the apostles and Jesus were discussing reincarnation. Note that Jesus did not affirm or deny the belief, so it was not something to which he strongly objected. Note also that Jesus at this moment did not deny the pre-existence of the soul, which is essential for belief in reincarnation.

Many lost works by great thinkers might still remain in the enduring sands of Egypt. Image by ahamenes.

Seminal Christian thinkers Clement and Origen lived and wrote in Egypt. We know little of Clement’s works, as many were lost, but we know that he wrote stories about worlds before Adam and about metempsychosis, a term for reincarnation, implying that he agreed with it. Clement was the tutor of a more famous thinker, Origen.

Origen, however, the greatest mind in the third century church, is now regarded as suspect by conventional religious authorities. This is because he took a view of original sin which differed from the conventional view blaming Adam and Eve. Origen was influenced by Orphic philosophy, which saw the world as a cyclic event with worlds following worlds. In his doctrine of apocatastasis he expressed the view that souls are reborn in successive worlds, bearing the strengths and weaknesses that they have developed in previous incarnations, until they are ready for God.

Origen’s writings are sometimes confused, but Geddes MacGregor, who wrote on this issue, is convinced that he taught reincarnation in some form. Origen acquired powerful enemies, whom philosopher and theologian Paul Johannes Tillich calls the simple ones, and for this reason, despite his renowned holiness and suffering for the faith, he has never been ranked as a saint.

Reincarnation ideas circulated in the first few centuries, but they became increasingly associated with Gnosticism. Gnosticism gets an unduly good press. It was a movement of spiritual elitists who believed that humans were divided into three broad bands, with spiritual men like them at the top (obviously).

Many Gnostics believed that we had to go through a cycle of incarnations before we became spiritual enough to go to God. This has affinities with Hinduism and may derive from Pythagorean thought, which was certainly circulating in the Roman world. It differed from orthodox Christianity as the latter believed that ordinary, unintellectual people could be saved by the ministry of the church. Gnosticism thought we were saved by knowledge; orthodox Christianity taught that we were saved by faith and love.

Through its association with Gnosticism, reincarnation began to drop out of the theological picture. 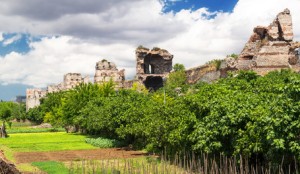 Today, we can still see the ruins of ancient Christian Constantinople, where church councils took place, Image by Scaliger.

The Origenists and the Council of Constantinople

By 553, orthodox Christians were in dispute with a group known as the Origenists, whose views had little to do with Origen. Their view was that after a series of incarnations a person could be equal to Christ. Effectively, they were claiming that humans could reach divine status. This view was unacceptable to orthodox Christians, who believe that Christ, while human, is also divine and as such cannot be equaled, merely emulated.

The dispute simmered until the emperor, Justinian, infamous for interfering in religious disputes, called a council. Constantinople Two was held contrary to the wishes of the Pope, who was imprisoned by Justinian at the time and refused to attend. It was mainly attended by Eastern bishops, there being but few from the West.

To get rid of the Origenists, the council condemned the belief in the pre-existence of the soul, and with this went reincarnation, which requires the soul to pre-exist its present incarnation. It is doubtful, however, that the council actually passed these verdicts in full session; they were probably passed at an extra-conciliar meeting after the council had finished. From then on the church taught that a new soul is created every time a child is conceived, as God’s blessing on the union.

Constantinople Two allowed Justinian to stifle theological discussion, and we lost an interesting religious idea at the time. Fortunately Justinian is long gone, along with his murderous invasions and theological interference. The council is testimony to the fact that while there may be problems when religion becomes involved in politics, there are also problems when politicians interfere in religion.