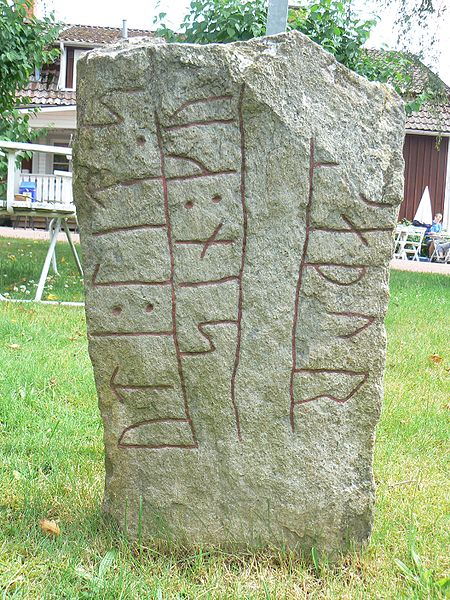 Reading the runes. Rune stones are in many parts of Northern Europe including Sweden, Norway and Scotland. Image by Skvattram.

Reading the runes has been a challenge for linguists and historians for centuries.

Appearing to be a relatively simple arrangement of straight or slightly curved lines, runes are really complex to decode, and often personal in nature.

A new study by runologist and PhD candidate K. Jonas Nordby demonstrates how playful the rune makers could be. They created coded messages even while learning how to make their runes on scraps of wood.

Nordby’s main finding is that people used codes even in writing the most humdrum messages, anything from “kiss me” to details of a deal.

Runes are an alphabet that Germanic cultures used in the early to mid Middle Ages. Saxons had one version of the runes that contributed to the development of the language known as Old English.

Norse people had another version that is associated with the Old Norse language and Vikings. Because the Vikings were converted to Christianity much later than other Germanic peoples, their written language was not replaced by the Latin imposed by the church.

Both alphabets were known as the ‘Futhark.’ Most surviving sets of medieval runes are Norse in origin.

Runes were in use long before the tribes we dubbed the Vikings began questing across the northern hemisphere. The oldest runes date from the second century, and most runes express a pagan culture.

Folklore imbues runes with magical power, perhaps arising from belief that the god Thor suffered to be worthy of the ‘gift’ of runes. Richard Kieckhefer in his study of Magic in the Middle Ages suggests that “magic is a force closely linked with writing.” He gives examples in folklore where runes are carved during magic chanting to imbue objects with protective (or harmful) powers.

Kieckhefer discusses amulets from as early as the pre-Viking sixth century that are inscribed with runes that do not transcribe into everyday language, but are very repetitive of certain runic symbols; “repetition of magical runes in this manner seems to have been common,” he suggests.

“I, the Magician” written in branch or twiggy cipher runes from the Younger Futhark period. Image by Edredd Thorsson.

On the Northern Isles of Scotland, the Vikings used their axes and knives to engrave runic graffiti, often on the Neolithic structures they found there, including Maes Howe, Orkney.

The Maes Howe runes contain a number of ‘twiggy’ characters, a recognised method of encryption. The added branches emphasised or changed the order of the letters, shifting the meaning, and needing a knowledge of local or personal codes to work out the message.

Christian Cooijmans’ comprehensive study, Between the Cracks: A Socio-Historical Context of the Runic Inscriptions of Maes Howe Orkney shows how various groups of Vikings used the Maes Howe chambered tomb as a refuge. This could be an overnight stop or even a longer stay dictated by bad weather. During their visits, they carved twenty-four groups of runes spelling out messages or statements, some encrypted. 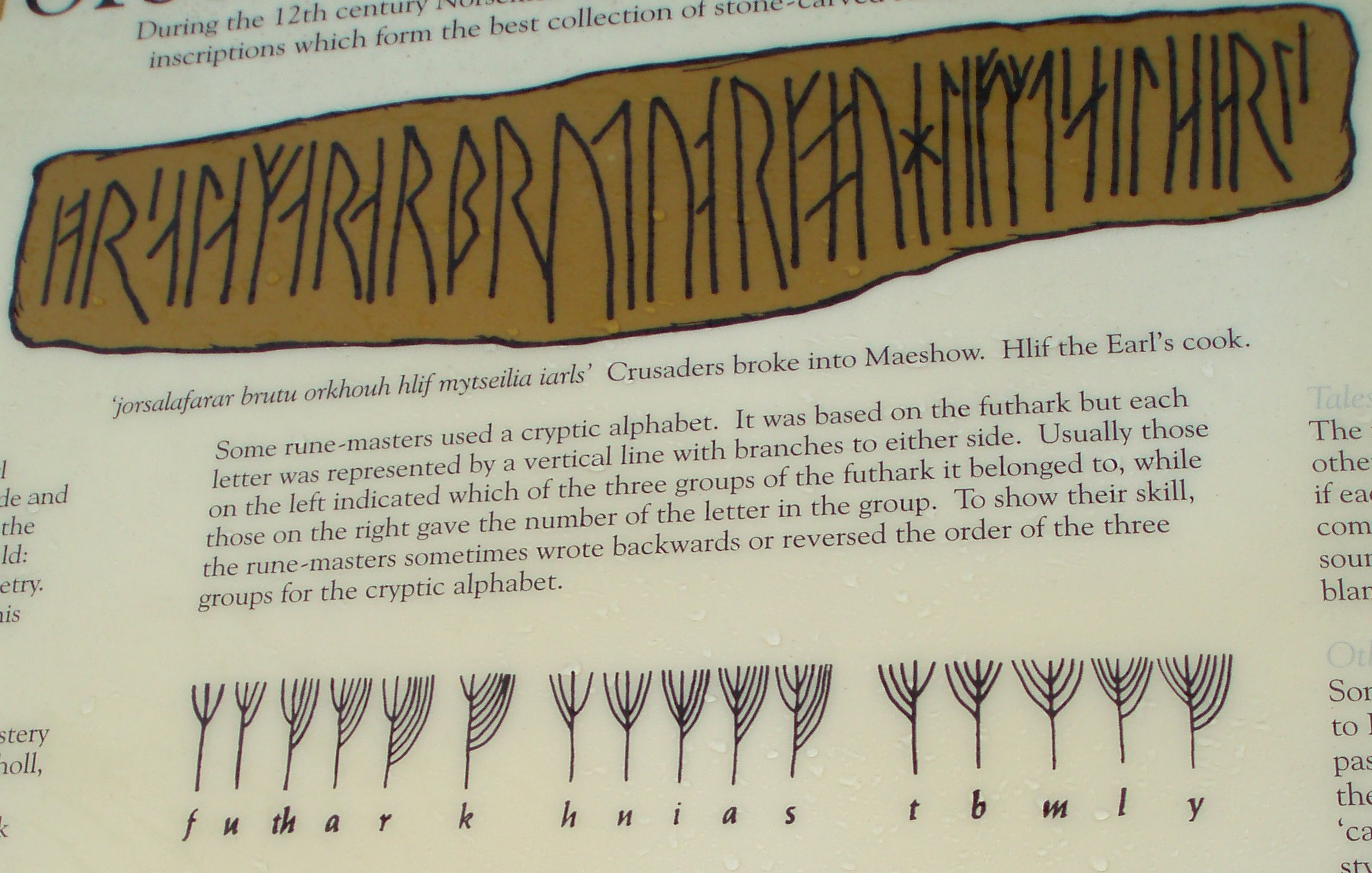 Maeshowe transcriptions of the Viking runes inside the tomb. Image copyright Val Williamson, all rights reserved.

As the Maes Howe runic inscriptions illustrate, rune writers were called ‘makers’ and claimed status by their cleverness. Runic inscriptions often refer the reader to the rune maker and to the runes themselves, as James Farrer’s seminal book Notice of Runic Transcriptions Discovered During Recent Excavations in the Orkneys shows. For example, in “Tholf Kolbeinsson carved these Runes,” the term ‘carved’ can read ‘hewed’ or ‘made.’

Riddles of the Jötunvillur Runes

Many of the Maes Howe runes are about literacy or sex and could be taken as tall tales about treasure and sexual prowess, Jonas Nordby believes. He has now studied all eighty runic inscriptions known in Northern Europe and believes that these cultures used rune codes for play and for learning.

Nordby originally set out to crack the twelfth to thirteenth century jötunvillur code, carved on a set of nine sticks found at Bergen Wharf, Norway. Eventually he realised that one of the sticks contained the names of two men, Sigurd and Lavrans, written in a code that swapped the order of the runes in a consistent way. It seems the makers of the jötunvillur codes were somewhat playful and may have enjoyed posing riddles for each other to work out.

The jötunvillur code sticks contained short immediate messages, rather like text messages today. They were probably better understood in the moment and circumstances they were created. Nordby is now using the first deciphered stick as a key to work out inscriptions on the others, but it may take a long time yet.

Cooijmans, Christian. Between the Cracks: A Socio-Historical Context of the Runic Inscriptions of Maes Howe Orkney . ( 2012 ). Academia.edu. Accessed on March 11, 2014