“The Creation of Adam,” painted by Michaelangelo, depicts God among the angels of heaven. Image by Urek Meniashvili.

St Anselm started what later became described as the “ontological argument,” which St Thomas Aquinas then took up and developed.

According to Iris Murdoch in Metaphysics as a Guide to Morals, Aquinas did not accept St Anselm’s Proof. However, St Anselm’s concept of God does seem to resonate with Aquinas’ Fourth Proof, the idea that perfection in the imagination must exist in reality.

St Anselm, a Burgundian, became Archbishop of Canterbury in 1093.  He battled through several theories, then set to defining his conclusions in his Proslogian.  Anselm claims that God must exist, because the concept of God exists.  The idea of God is synonymous with that of a supreme being, Anselm believes. Nothing greater than the Supreme Being can exist in the imagination, so it must follow that it must exist in reality.

In Metaphysics as a Guide to Morals, Iris Murdoch describes Anselm’s acceptance of the “…invisible in the visible, the uncreated in the created, the great Good in the lesser good.”  Murdoch also speaks of the need for certainty, which she describes as a “dangerous concept.”  She says, “Certainty: clarity. In Anselm’s spiritual life these ideas are intimately connected.” 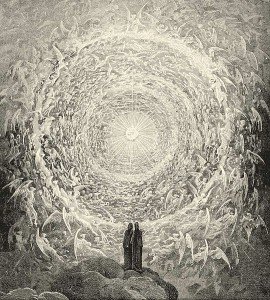 Dante and Beatrice gaze upon the highest heaven in Paradiso Canto. Painting by Gustave Doré.

In his own time, St Anselm had his critics.  In “St. Anselm of Canterbury,” Philosophy – 100 Great Thinkers, Jeremy Harwood quotes Gaunilo of Marmoutiers, who says that Anselm’s reasoning allows for many supposedly perfect things that could not possibly exist.

“Anselm’s reply was that it was a mistake to apply his reasoning to argue for the existence of anything other than God,” says Harwood.

Murdoch applies a modern, more psychological approach: “Anselm’s Proof has interested thinkers because it seem so concise and “logical”. But neither its Christian nor its logical charm must be allowed to conceal its fundamental sense. The idea of God, (goodness, virtue) crystallises out of our moral activity.”

In order to “Christianise” Greek thinking and render it harmless to Christian dogma, St Thomas Aquinas came up with the following Five Proofs, which he published in his Summa Theologica, (Summary of Theology).  Bertrand Russell summarized these in History of Western Philosophy.

In short, St Thomas Aquinas believes that all rational knowledge can only be gained through sensory experience. Studying the world shows us the essential nature of things. We must strive for our highest good, believe in Christ as our salvation and as our protection in Heaven and on Earth.

Thomism: A Philosophical Theory to Prove the Existence of God

© Copyright 2013 Janet Cameron, All rights Reserved. Written For: Decoded Past

Murdoch, Iris. Metaphysics as a Guide to Morals. (1992). Penguin Books.