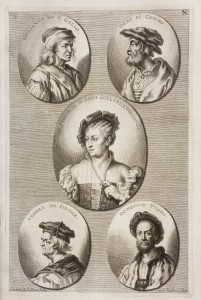 At a time when women artists were barely recognized, Properzia de Rossi (1490-1530) excelled as a sculptor and miniaturist. What was it that made this artist so memorable?

De Rossi produced relief sculpture and free-standing sculptures of religious scenes, both typical of the period, working primarily in marble, a difficult and unforgiving medium.

Contemporary collectors and art enthusiasts praise her early works, most of which were religious in nature, for her ability to create intricate compositions carved on tiny peach and apricot pits.

De Rossi, however, excelled in the vibrant drama of human movement within the confines of a piece of marble.

Living and working in Bologna, Italy, de Rossi was surrounded by many of the great artists of the time and their creations.  She strove for a sense of realism in her sculpture, much like her contemporaries. Yet, she obviously possessed great skill and creative talent, as she outshone many of her peers with her obsession with detail.

Judging from the few works that have survived, it would appear that de Rossi preferred creating sculptures in relief (a work sculpted from an otherwise flat surface). She used the entire surface area, filling the entire face with active figures, giving the impression that there was more of the image beyond the confines of the sculpture itself.

De Rossi had a good knowledge of the human figure, and was able to carve human figures with great accuracy and in great detail. The finished product was always well-polished, to allow the shine of the stone to accentuate the lights and shadows of the image itself.

There was an intellectual and spiritual worldliness during the Renaissance, something that became very evident in the visual arts of this time period. It was evident in Raphael’s work as well as that of de Rossi.

According to historical accounts, de Rossi was a truly remarkable artist; a sculptor with great talent and spiritual insight.

You can find some of her works in museums – such as her sculpture of Joseph and Potiphar’s wife, which resides at the Museo de San Petronio, Bologna.

Sadly, like so many women artists of the Renaissance, we know very little about this woman, and very few of her works are still in circulation and on display. Occasionally a small piece of sculpture attributed to de Rossi will appear at auction, and some of her relief work is at some of the Bologna churches. Unfortunately, there really is no comprehensive list of de Rossi’s sculpture.

It was a time when society seldom took women seriously in matters outside of the home. And yet, Properzia de Rossi, proved that she could excel in a male-dominated profession. Her creative output was small, as far as we know, but what she did produce was exceptional, not just for a woman of the Renaissance, but for any artist.

Kristeller, Paul Oscar. The University of Bologna and the Renaissance. (1985). Itinerari Medievali. Accessed on June 16, 2014

Pater, Walter. Studies in the history of the Renaissance. (1873). Oxford University Press.